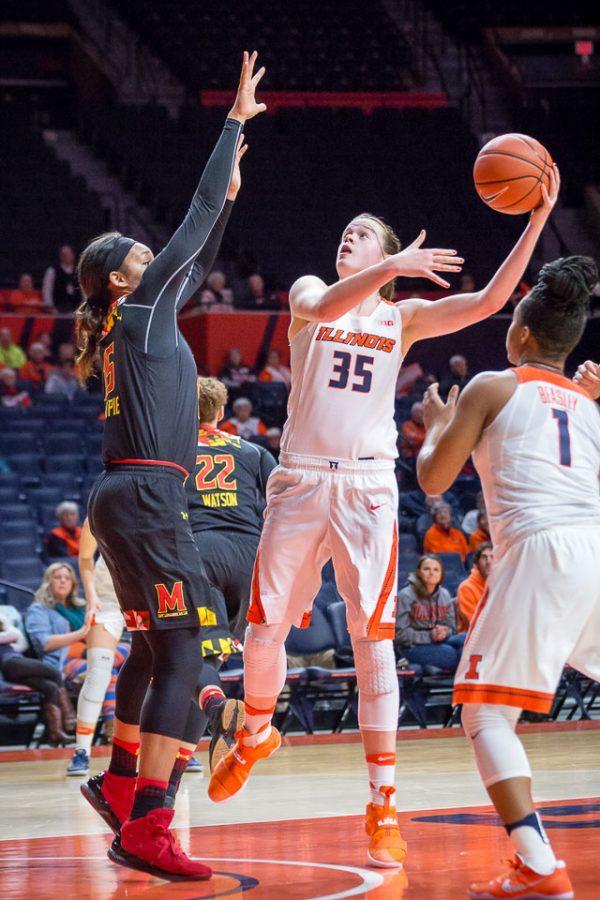 Illinois’ Alex Wittinger goes up for a layup during a game against Maryland at State Farm Center on Thursday, January 26. Illinois lost

It has been nearly three years since the Illinois women’s basketball team earned a victory over Northwestern.
In that game, the Illini were led to victory by junior Ivory Crawford. She scored a team-high 19 points in Illinois 76-74 win. The two-point victory was one of just two conference wins during the 2013-14 season.
A lot has changed since then. Crawford is no longer Illinois leading scoring in conference, freshman Brandi Beasley has that title now, and Illinois’ 13th all-time leading scorer is playing overseas in Europe.
But in the same sense, not much has changed either. In her absence, the Illini haven’t had a winning season in conference. The last time the team finished above .500 was the 2012-13 season. It was head coach Matt Bollant’s first campaign as Illinois’ head coach.
Five years later, and Illinois is currently 3-10 in the Big Ten and has lost eight consecutive games. But with three conference games left, Bollant believes his team must look at the end of the regular season as a clean slate.
“We try to say things like, ‘Let’s start 0-0 here today,’” Bollant said. “We got (three) games left. Let’s see if we can win this one and go from there. Let’s find a way to start the game with passion against Northwestern, and see if we can play (well).”
Northwestern enters Sunday’s matchup on a losing streak as well. The Wildcats started out 4-2 in conference, but haven’t won a game in over two weeks. A win against Illinois would put the team back at .500 in the Big Ten, and improve its overall record to 18-9.
Despite their recent rough patch, the Wildcats have shown that they can make things very difficult for opposing offenses. Northwestern ranks No. 1 in field goal percentage defense in the Big Ten, holding opponents to just under 38 percent shooting. The team also ranks second in conference in blocked shots and third in steals with 144 and 227 respectively.
Sophomore Alex Wittinger will look to bounce back against Northwestern’s stout defense after a poor shooting performance against Penn State. Illinois’ leading scorer – averaging 14.8 points per game – scored only eight points while shooting just 3-15 from the field. She scored the first basket of the game for the Illini, but couldn’t get into an offensive rhythm.
“She had two or three threes in the first half, that went in and out,” Bollant said. “They were good takes and (I thought) if that’s not working, let’s try to get her inside.”
Junior Kennedy Cattenhead started in Illinois last game, and despite only attempting five shots, she showed flashes of offensive potential with two solid late-game post up moves. It has been a very up and down season for Illinois’ forward.
She has scored in double-figures eight times, but has three games this season where she hasn’t recorded a point. Bollant wants his starting forward to engage herself from the start of the game and crash the boards against Northwestern.
“I didn’t think she played a great first half (against Penn State) and we need her to rebound,” Bollant said. “We’re just not very long so Kennedy has to rebound for us. I thought in the second half she played with energy and life and played the way she is capable of playing.”
[email protected]
@RomeovilleKid