Illinois football’s Smith and Chance The Rapper have unlikely bond 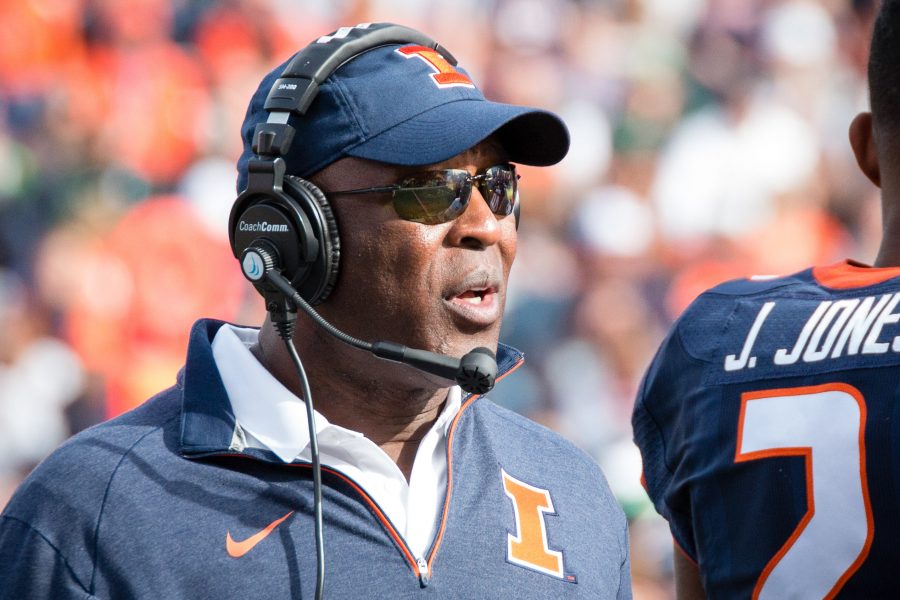 Illinois head football coach Lovie Smith was raised in Big Sandy, Texas, but he has taken a liking to the state of Illinois after coaching in Chicago and Champaign.

“I believe in homegrown, state of Illinois (people),” Smith said.

Extremely late but congratulations to @chancetherapper (my new favorite artist) on a great night at the Grammy's! #HomeGrown pic.twitter.com/Z2D1EGOsgF

Less than an hour later, Chance The Rapper got back to the Illinois coach.

“Thank you man you’re a legend thanks for all you’ve done for Chicago and Champaign,” Chance tweeted.

Thank you man you're a legend thanks for all you've done for Chicago and Champaign https://t.co/jVTuLBzrcn

The exchange seems to have went viral at the University. Many Twitter users suggested Chance should perform in Grange Grove, the State Farm Center or with the Marching Illini during halftime.

Smith said Chance is his new favorite rapper, but he still enjoys R&B.

Wide receiver Samuel Harlib has never caught a pass in his collegiate career, but the senior is one of the leaders at his position.

“(Harlib) knows what’s expected,” fellow senior wide receiver Malik Turner said. “He’s really familiar with the offense. He knows what’s going on, and he works extremely hard, even though he is a walk-on.”

Harlib joined the team as a preferred walk-on prior to the 2013 season.

After redshirting his freshman year, Harlib transitioned from safety to wide receiver.

He then tore his left labrum in his first spring practice in 2014 during a blocking drill.

But he fought through the injury and appeared in six games last season.

Now in his second spring ball, Harlib is excited for the challenge of earning playing time.

“(This year’s spring ball) is a big challenge because we have low numbers,” Harlib said. “It’s really just focusing on technique and getting ready for the fall.”

Turner said he is seeing a similar drive from the walk-ons as he has seen with Harlib.

“(The walk-ons) have shown growth over the past couple of days,” Turner said. “They’re a little banged up right now, but I think they’ll be able to help us out.”

Harlib lined up to the left of quarterback Trenard Davis during a drill in Saturday’s spring practice.

He ran a streak route, but the pass went to junior Sam Mays on a slant.

While he still has yet to catch a ball in a game, Harlib is excited about this season’s prospects.

“Everybody on the team has a role,” Harlib said. “Hopefully, mine will be bigger than last year. Hopefully this year I can be a receiver.”

Smith and his staff are already at work preparing for the 2018 recruiting class, only two weeks after 2017 National Signing Day.

“We just want to start the process, the process of introductions to a player and hopefully trying to get them on board with our vision and our program,” Smith said. “A lot of things will happen in between, but you need to start that process.”

Illinois invited many 2018 recruits and their families to its spring practice on Saturday.

Recruits were able to talk to Smith and the staff, listen to a player panel and sit in on positional meetings.

“We have quite a few of the top players here that like what we’re doing and can see themselves possibly being here,” Smith said.