Illinois men’s tennis ready for matches with NIU and UK 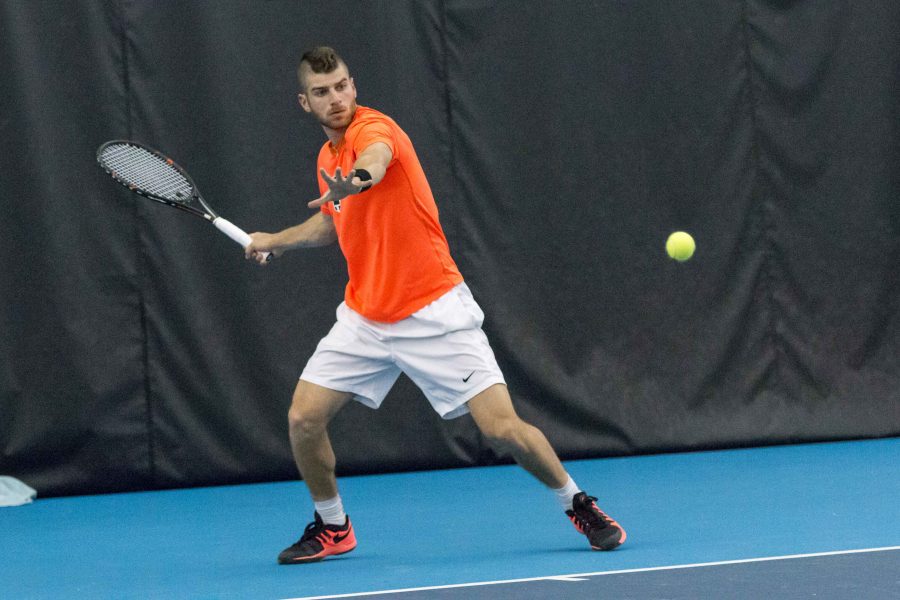 Illinois’ Aron Hiltzik gets ready to return the ball during the match against Wisconsin at the Atkin’s Tennis Center on Sunday, April 3. The Illini won 4-0.

After a week off, the No. 19 Illini are ready to face off against Northern Illinois and Kentucky in a double header at the Atkins Tennis Center on Friday.

Illinois is 5-2 so far this season, with its most recent loss coming against No. 1 Virginia. The squad also boasts two top-30 ranked players, No. 23 Aron Hiltzik and No. 29 Vuk Budic.

“I think each person we’re preparing a different way has a different game style,” head coach Brad Dancer said. “(We’re) kinda trying to individualize that preparation in the right mindset, hitting shots they wanna hit overall understanding their game and how it’s going to impact their opponent.”

The Illini are slated to take on NIU first on Friday afternoon in hopes of ending the Huskies seven-match winning streak.

“It’s one of those things where we’re going to have to play it match-by-match,” Dancer said. “I don’t believe in momentum.”

Illinois plans to play against Kentucky later on in the evening. In hope to conclude this season’s first home double-header, the men’s team is focusing on individual matches.

The Wildcats are fresh off a 4-3 loss to Michigan and have a current record of 8-4. The team previously clinched a 4-0 sweep against Illinois’ conference opponent, Indiana. The Illini beat the Hoosiers earlier in the season 5-2.