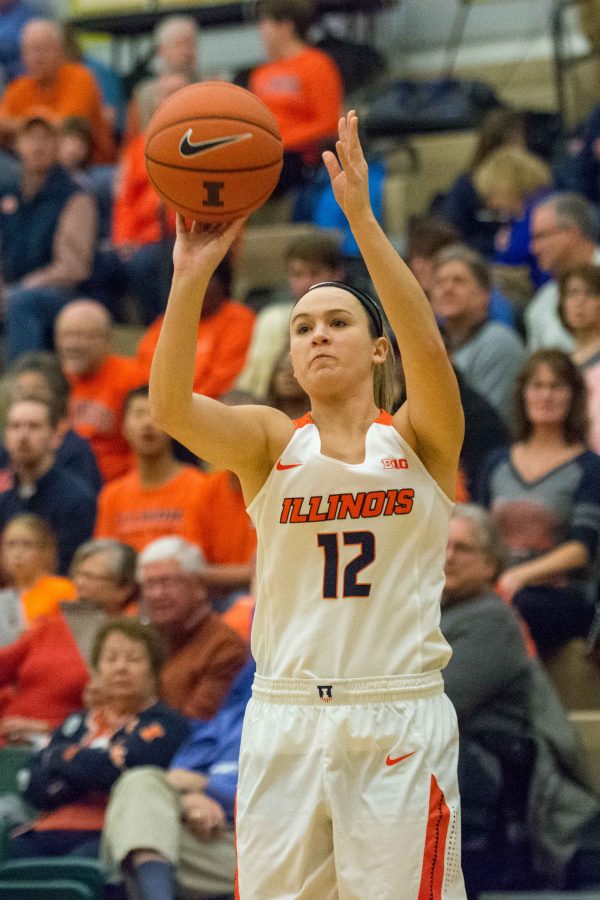 Guard Ashley McConnell takes a shot during the game against Tennessee State at Parkland College on Tuesday, Nov. 24. Illinois won 98-43.

Ashley McConnell is the only senior on the Illinois women’s basketball team.

She has played in 80 games in her four-year career – starting in eight – and Saturday marks the last time she will play at the State Farm Center.

Illinois will take on Indiana to close out the regular season, but before the game gets underway, the Illini will take a moment to honor their lone senior on Senior Night.

McConnell has only been victorious 42 times throughout her career, and the Illini are currently on an 10-game losing streak. Illinois is 3-12 in conference and 8-20 overall this year, but despite her team’s struggles, a win against the Hoosiers would still mean a lot.

“It would be huge,” McConnell said. “I would love to end (my) career with a win at home especially (because of) this season. We’ve been playing well at home so just to be able to end it (with a win) would be great.”

McConnell said her four years have gone by quick. She remembers always wanting to attend the University because her older sister was a student a few years ago.

But unlike many other players on the team, McConnell did not receive a scholarship to play basketball. She said that the Illini offered her the opportunity to become a preferred walk-on, and even though she didn’t receive the same financial aid as her peers, she embraced the opportunity.

McConnell eventually earned a scholarship during the second semester of her freshman year and has been on scholarship ever since.

“You know in today’s society you just don’t see kids that are great teammates all the way through, especially if they don’t play as many minutes as other kids,” head coach Matt Bollant said. “She’s done that phenomenally well.”

A win on Senior Night would not only be a positive end to McConnell’s career, but it could also provide some much-needed momentum for the Illini heading into the Big Ten tournament. Illinois is currently tied for the second-worst record in conference and also has the longest current losing streak in the Big Ten.

In the team’s last outing, sophomore Alex Wittinger was one rebound shy of her 11th double-double of the season. She scored a team-high 19 points in the Illini’s four-point loss to the Badgers.

Wittinger said that ending the season with a win would help a lot in preparation for the Big Ten tournament and added that Illinois could end up with a favorable first-round matchup.

“If we do well from here on out, I think the team that we’ll play will end up being Nebraska,” Wittinger said. “(That) would a good first game because we played them before. We beat them before. They’d probably be the best team to play out of out all the others in our (part) of the bracket.”

But before Illinois prepares for the postseason, McConnell plans on soaking up every moment she has left with her team. Even though she is one of just two upperclassmen on a team with seven freshmen, she has enjoyed their company in her final campaign.

“These youngsters, they’re great teammates,” McConnell said. “They’re so much fun to play with. They bring a lot of energy and to me, it doesn’t even feel like they’re freshmen. I feel like they’re my age, and I can just talk to them.”