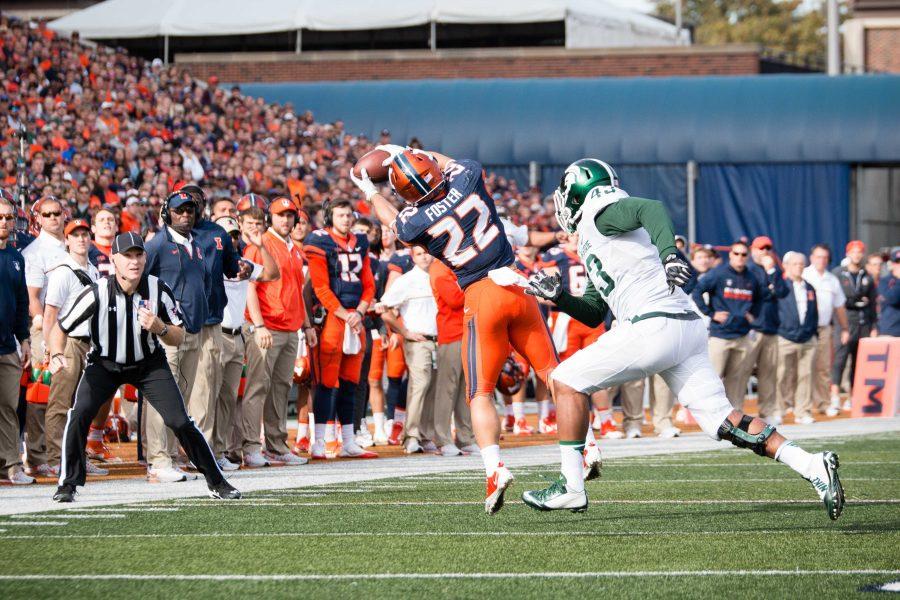 Illinois running back Kendrick Foster catches a pass during the game against Michigan State at Memorial Stadium on Saturday, Nov. 5. Foster received the Mental Toughness Award for his actions off the field.

The most nerve-wracking part of Kendrick Foster finding out he had won the National Football Foundation’s Mental Toughness Award last month was learning that he would have to make a speech.

“I didn’t know too much about (the award), and they said I needed to write a speech,” the Illinois senior running back said. “I was pretty nervous, but the speech went great.”

Everything Foster does these days seems to be great.

Whether it is the team-leading 720 rushing yards, seven rushing touchdowns and 1,328 all-purpose yards last season, or off-field recognition, Foster seems to be doing something right.

“Last year at this time, we asked him to do some things with his body, and he did that,” Illinois head coach Lovie Smith said. “He took on a leadership role.”

The National Football Foundation & College Hall of Fame is distributing more than $1 million in scholarships during its 2017 banquet season, according to an NFF press release. More than 3,500 student-athletes across the country were recognized for their achievements on the field, in the classroom and in the community.

“The NFF Chapter Network, spread across 120 outposts in 47 states, serves as the backbone of a nationwide effort to encourage academic excellence, leadership and sportsmanship among young football players nationwide,” said NFF President & CEO Steve Hatchell in the same release.

He was a recipient of the NFF Mental Toughness Award along with Northwestern’s CJ Robbins and Illinois State’s Jamal Towns.

“You want to be rewarded,” Smith said. “You want guys that get rewarded after they move into a role the way Kendrick has.”

Foster’s mother, Mindy Sullivan, was in attendance as well as his father, James Foster, who made the trip in from Arizona. Family friend Sherrick McManis — a current Chicago Bears cornerback and a fellow Peoria native — came with his wife and daughter to celebrate with Kendrick.

“It was great to just see my family,” Foster said.

Offensive line coach Luke Butkus introduced Foster at the banquet. Butkus helped the Illini recruit the 5-foot-9 halfback during his first stint with Illinois in 2012.

Foster said he and Butkus have formed a great relationship off the field.

“(Butkus) always gives me a hard time,” Foster said. “When he gives me a compliment, it is very rare because he never tries to. But he did a great job, and he’s an awesome guy.”

While Foster continues racking up on-field accolades, he is more humbled by the off-field recognition.

“I’ve just been a good person,” Foster said. “That’s who I am, and that’s how I was raised. I’ve been put in a position to be a leader on and off of the field.”