Illinois cruises to victory over Iowa 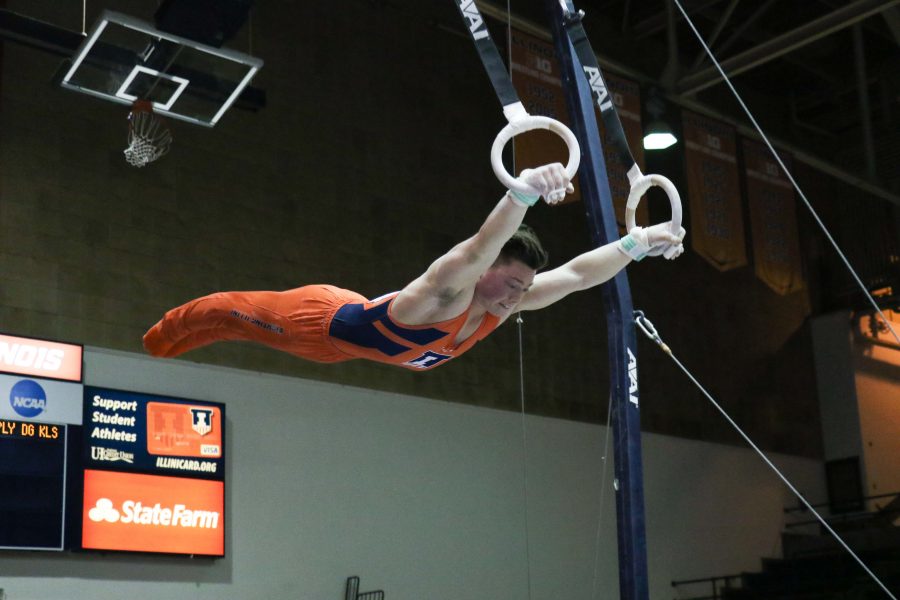 Illinois’ Alex Diab works the still rings at the meet against Minnesota in Huff Hall Saturday. His score tied the season high.

After two rotations, the Illini led 135.400-123.100 due to technical errors from the Hawkeyes during their floor routines. Iowa finished with a total of 63.900 in the team’s second event, which was well short of the 70.100 Illinois scored to begin the meet.

“I just talked to the coach [from Iowa]. They kind of had a meltdown on their first two events which gave us a huge buffer we held through the meet,” Head Coach Justin Spring said. “Had they not had that [start], they could’ve gotten the better of us.”

Illinois finished the meet with the top individual performance in five of the six events.

Sophomore Alex Diab, who most recently competed in the Winter Cup Challenge, took home event titles on the floor and rings. Diab’s 14.900 on the rings tied a season-high, earning him his fifth title in the event this season.

Graham received word he would compete after showing improvement during the team’s past three weeks of training.

“I felt a little bit nervous but definitely super excited,” Graham said. “All the hard work in the gym paid off, and I definitely feel like I earned it.”

Iowa senior Andrew Botto helped narrow the margin as he claimed an individual title on vault. Botto finished far ahead of the field with a 14.950, followed by teammate Dylan Ellsworth’s 14.600.

For the Illini, freshman Jacob Light and junior Bobby Baker led the way as both received 14.450 on vaults. Light’s career-high score was the result of a choice to take a chance on an upgraded routine.

“He had done his old lesser valued vault once before but he did the upgraded vault,” Spring said. “He didn’t land it in warm-ups but he had he had been hitting it all week … and that was maybe one of the more explosive emotional moments of the night.”

In the final rotation, Illinois concluded the meet with junior Tyson Bull on the high bar. Bull finished the meet on a high note with a score of 14.250, earning him his fourth title in the event this season.

After the meet, Spring briefly played with his son, one of many children present at Huff Hall for the competition.

“We’re a family-friendly event,” Spring said. “I think we’ve got a pretty strong gymnastics community despite our small town … there are quite a few gyms in the area. It’s great for little gymnasts to come out and watch some very high-level and close to Olympic level gymnastics right in their backyard.”

The Illini will next compete in San Juan, Puerto Rico, for The Puerto Rico Gymnastics Challenge on Saturday. No.11 Michigan, No. 18 Temple and host Puerto Rico are competing in the event.