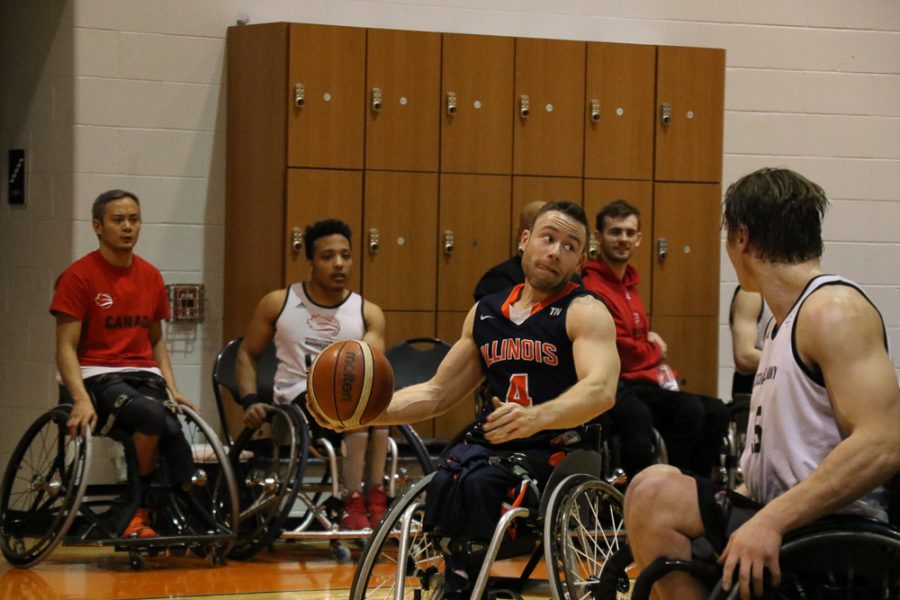 Illini’s Ryan Neiswender takes the ball down the court against the Canadian National Team at the ARC on Jan. 28th.

Now, he is leaving with even more.

“We’re peaking at the right time, which is what’s important,” Neiswender said. “I don’t think our mindset or thought process of what we can achieve has changed.”

The Illini opened the tournament with their loss in a game that head coach Matt Buchi said was riddled with turnovers and bad shooting. Afterward, he said the team picked up its level of play.

“We definitely had a full-circle look of, ‘What are we actually going to play like at nationals?’ after playing that UT-A game,” he said with the National Wheelchair Basketball Tournament next weekend. “We didn’t play to our potential.”

After a key shot by junior Spencer Heslop at the end of the game, Illinois ended the tournament by defeating Alabama on its Senior Night — one week after the Crimson Tide did the same to Illinois.

“If we have close games at nationals, we know that we’re going to come out on top,” he said. “We’ve been there before, we’ve done that. I think that’s a moral booster — confidence booster — and our guys are hungry.”

At 9-8, the Illini finished fourth overall in the NWBA men’s intercollegiate standings. The team is ranked third in the postseason, behind rivals University of Wisconsin-Whitewater and UT-A, respectively.