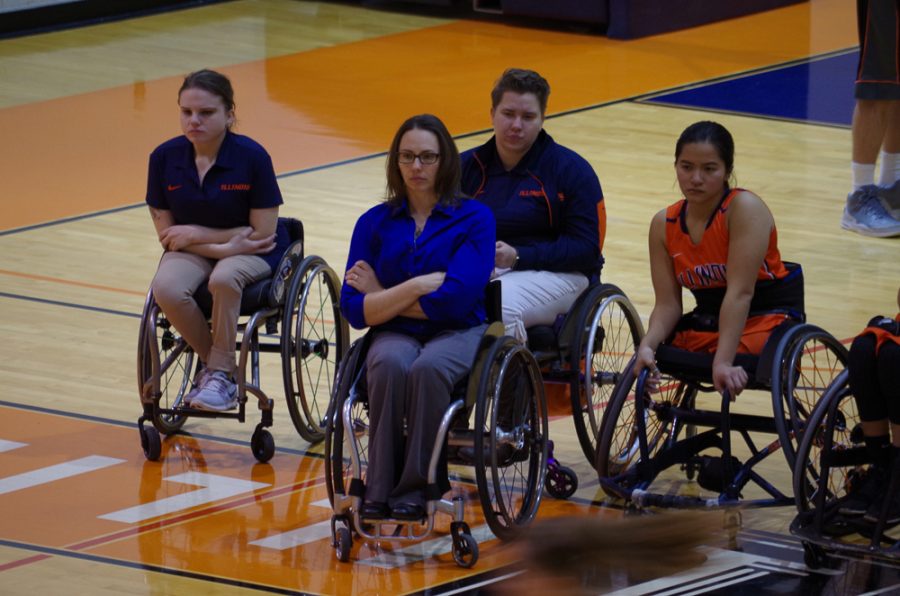 Coach Stephanie Wheeler watches as the womens team plays against Canadian National Academy in the ARC on Friday, Jan. 27th.

For Kaitlyn Eaton of the Illinois women’s wheelchair basketball, breathing exercises are essential.

“I’m a very aggressive player out on the court, and I know that about myself,” she said. “Before games … I just have to take some time and be with myself, focus my breathing and keeping myself calm.”

Eaton was referring to the Illinois women’s wheelchair basketball team’s 1-2 outing in Alabama last weekend. It was the Illini’s last regular season tournament, and they finished the season at the bottom of the intercollegiate standings at 1-11.

“We did not end playing our best this weekend,” head coach Stephanie Wheeler said. “That’s the reality of it.”

Wheeler said there were moments when Illinois was performing at its best, but it was not consistent. She said she felt the players were getting caught up aspects of the game that were “uncontrollable,” such as the score, the other team or the referees.

“When we let our minds kind of float into things that we couldn’t control, then we weren’t focused, we weren’t disciplined and we weren’t confident,” Wheeler said. “That’s when we didn’t play well.”

Illinois only won 39-30 over Wisconsin-Whitewater. The Illini will head to Whitewater in less than two weeks for the National Wheelchair Basketball Tournament. Since Illinois is guaranteed in last place, it is guaranteed two games there instead of three.

Prior to the playoffs, Eaton said Illinois will continue to talk about how to prepare for games.

“We talked a lot about that throughout the season,” she said. “That’s part of it.”