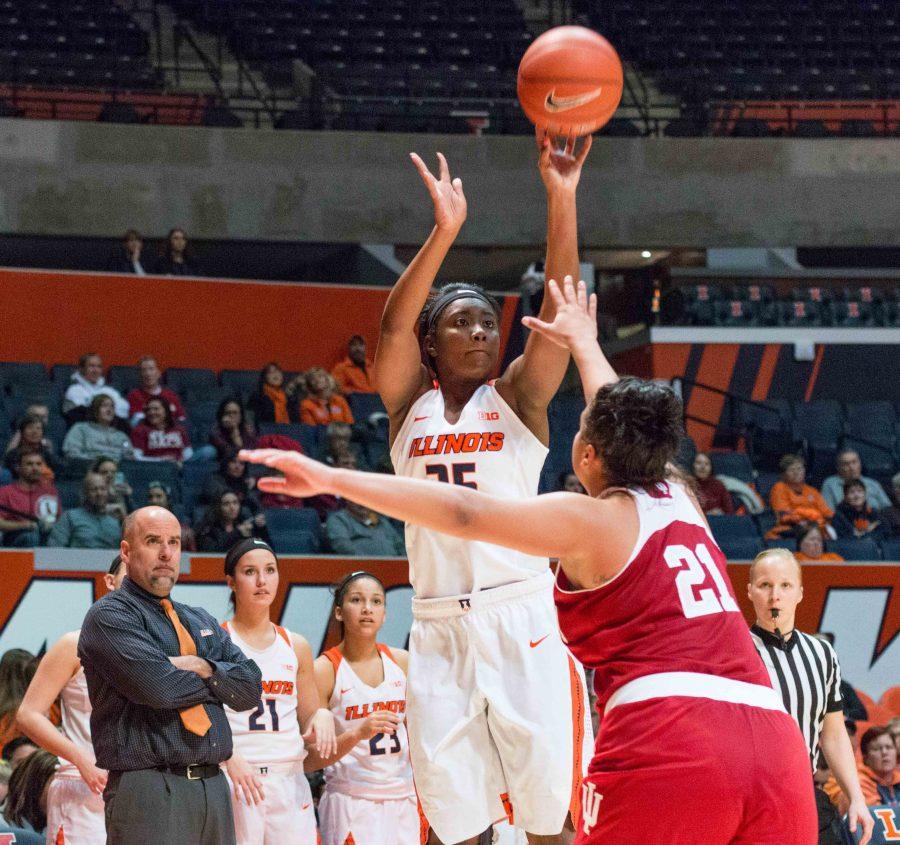 Illinois’ Kennedy Cattenhead shoots a three during the game against Indiana at the State Farm Center on February 10. The Illini lost 70-68.

The record-setting afternoon the Illinois women’s basketball team had against Nebraska did not translate over to its second-round matchup with Purdue.

Against the Cornhuskers, the Illini knocked down a Big Ten Tournament record 14 three-pointers. Freshman Ali Andrews led the way for Illinois, shooting 60 percent from beyond the arc and racking up a career-high 24 points.

Andrews struggled to find an offensive rhythm against Purdue. The Boilermakers are ranked No. 1 in scoring defense in the Big Ten, and they made it clear that they wouldn’t give Andrews any chance to repeat her performance.

She finished with 10 points but was held scoreless in the first half of the Illini’s 72-58 loss.

“I thought Ali (during) the second half was really good,” head coach Matt Bollant said in a post game radio interview with Illinois Athletics’ Dave Loane. “She didn’t have a very good first half, but she stepped up and made plays. It showed a little bit today (that) we missed Alex (Wittinger).”

Wittinger, Illinois’ leading scorer, sat out her second consecutive game with an injured left pinky finger. The Illini masked her scoring absence against the Cornhuskers with an unprecedented shooting display, but the team was 7-for-24 from behind the arc against the Boilermakers.

Junior Kennedy Cattenhead was the Illini’s main low-post threat. After going scoreless against Nebraska, Kennedy scored a team-high 15 points – shooting 6-for-9 from the field – and also snagged four rebounds.

Bollant said that he was proud of the resiliency Cattenhead and the rest of the team showed throughout the game, but added that the Illini’s slow start cost them in the long run. The Illini only scored eight points during the first quarter and trailed by 12 points entering the second period.

“We showed a lot of fight,” Bollant said. “(I’m) disappointed in the first quarter. We didn’t play great there (and) didn’t make shots. But after that I thought we really fought and did the right things.”

Illinois clawed back into the game and tied things up at 25 with 1:21 left in the first half after a three-pointer from freshman Courtney Joens. But a few plays later senior Ashley Morrissette responded with an individual 5-0 run to put the Boilermakers ahead 36-32 going into the break.

Aside from that brief scoring outburst Morrisette, Purdue’s leading scorer, was held in check. She scored just 13 points and missed 10 of her 15 field goal attempts.

Junior Andreona Keys stepped up and led the way for the Boilermakers. Her offensive versatility was on full display throughout the game. Keys tallied a career-high 26 points and also chipped in six rebounds and five assists.

Freshman Brandi Beasley ended her first season with the Illini by scoring in double figures for the 12th consecutive game. Her 14 points were highlighted by a four-point play from the top of the key in the third quarter. She ends her freshman campaign averaging 13.6 points and 5.3 assists.

Purdue improves to 20-11 and will move on to face Indiana, but Illinois ends its season at 9-22. The Illini did earn their first Big Ten Tournament victory since 2011 but lost 12 of their last 13 games. Despite the disappointing end, Bollant is optimistic about the future of his team.

“We’ve got an unbelievable point guard in Channise Lewis coming in,” Bollant said. “Addaya Moore is just a really good player as well (and) will add some physicality. We gotta grow up and just take a big step, and I really believe we’re going to do that.”