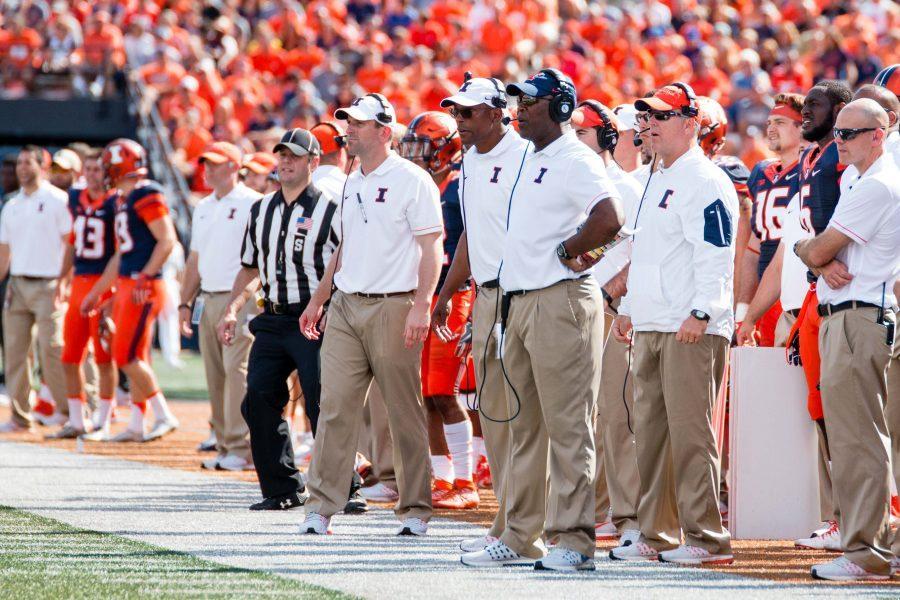 Illinois head coach Lovie Smith watches his team from the sidelines during the game against Murray State at Memorial Stadium on Sept. 3. The Illini’s 12th spring practice will be open to the public on Saturday.

The only expenses a college-bound student-athlete may receive from a college during an unofficial visit are three tickets to a home sports event, according to NCAA recruiting guidelines.

Second year Illinois football head coach Lovie Smith may be fairly new to college recruiting procedures, but he is aware this is not the only type of “unofficial” he has come across at the University.

“What’s Unofficial? I thought all of the official and unofficial visits were taken care of,” Smith joked.

He is aware of what is considered an event that “glorifies underage drinking, the abuse of alcohol and negative alcohol-related behaviors,” according to an e-mail from University Housing.

Smith, however, has not had much of an opportunity to speak up on the issue in the weeks leading up the Friday celebration.

The Illini have been participating in their 15 spring practices. The 11th practice will be held from 4:30 to 6:30 p.m. on Unofficial.

“We haven’t been talking a lot about it right now,” Smith said. “We’ve been talking football as much as anything. We practice Friday evening, and we have an early workout the next day. Our guys know what’s at stake, and all of that is a little bit bigger than one day.”

The Illini do not just have a workout on Saturday. They have their 12th spring practice, which will be open to the public and the media inside Memorial Stadium.

While Smith puts trust in his players to act responsibly on Unofficial, he has acted a disciplinarian in his first year at Illinois.

He banned players from riding around campus on scooters last June.

Offensive lineman Gabe Megginson said several members of the coaching staff have spoken up about the dangers of alcohol and the consequences making poor decisions can have on the program as a whole.

“(Offensive line) Coach (Luke) Butkus and (Smith) talk about protecting this team,” Megginson said. “If you embarrass this team, you embarrass your family. Nobody wants to have that on their back. I think a lot of guys really take that seriously.”

While University students begin hitting campus bars and parties Friday morning to celebrate, athletes like Megginson will be attending class and football practice.

“Our guys are smart enough to put (Unofficial) out of the way,” Megginson said. “We came here to play football and be students. That is going to be our priority.”