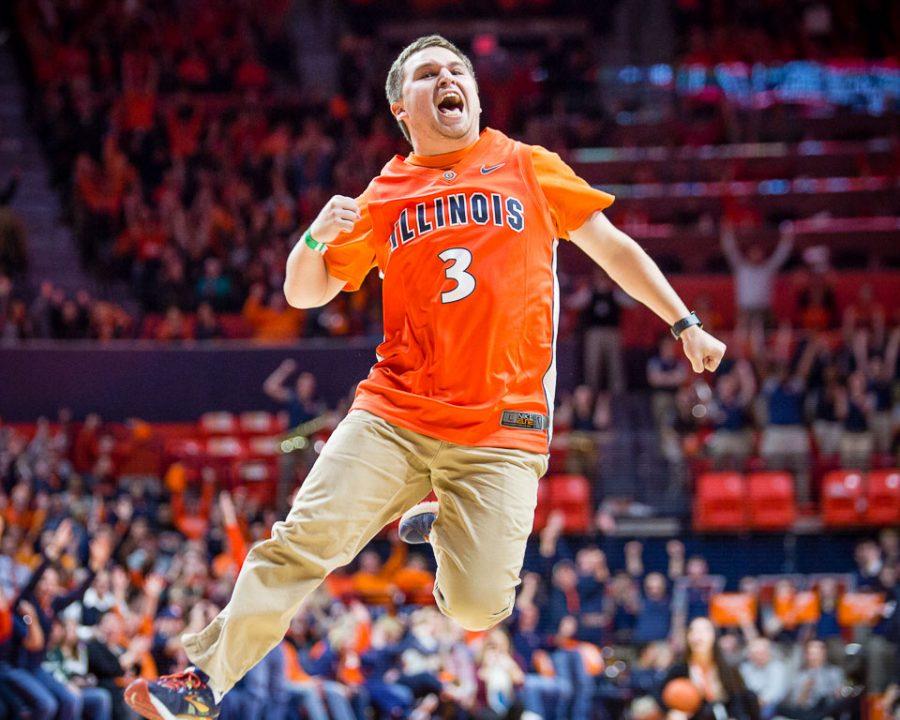 Illinois student Drake Kurtenbach celebrates after hitting a shot from half court to win ten thousand dollars during a break in the game against Michigan State at State Farm Center on Wednesday, March 1.

The senior in accounting was one of two students to make a half-court shot with a $10,000 payout each, as part of a promotion during the Illinois men’s basketball 73-70 win over Michigan State on Wednesday.

Dowling’s friend told him about the promotion: By downloading and checking into the Illinois students’ Oskee Rewards app, students would be entered for the chance to shoot.

Dowling already had the app so he showed up to the game on time and checked in.

But he didn’t realize he got a notification telling him he had the chance to shoot until 7:13 p.m.

His deadline to meet over by the marketing table — 7:15 p.m.

He ran and just made it over to the table to sign some forms, leaving the rest to chance.

Dowling went behind the line, shot the ball and followed through. He then started to run, unsure of what was to happen, his arm still perched in his follow-through formation.

The crowd went wild as the ball soared through the net, and Dowling realized he just hit the jackpot.

“It was unreal,” Dowling said. “I think about it; how did I even get in that position?” Dowling said. “Just to be given that opportunity was a blessing. I’m so thankful I made the shot.”

Kassidy Brown, Illinois’ Assistant Director of Marketing and Fan Development, said the idea for the half-court shot came last week during a brainstorming session. Her team knew the game would be a big one, and wanted to make sure students not only claimed tickets, but also showed up.

Using Oskee Rewards, an app that launched in August, allowed Brown and her team to pick at random. Brown said every 10th person who checked in was sent a notification.

She said their percentages of check-ins went up 20 percent with the game.

With all the hype her team created, Brown said it didn’t cross her mind that no one would make it. But she was happy that two students made the shot.

“It was awesome, especially (Dowling) hitting that in the pregame, the stands weren’t quite as full,” Brown said. “You definitely heard people talking it. Seeing footage, now everyone’s hands are up.”

Brown said she noticed the energy kept the crowd engaged and added that “anything we can do from a marketing standpoint, we’ll do it. And hopefully that keeps going throughout the game.”

The next and final winner made his shot in the first half, once again feeding the crowd’s energy.

Drake Kurtenbach, a senior in mathematics, also said he had to run once he got the notification, but he was shocked that he was even picked.

He wasn’t too worried, as he said he didn’t have anything to lose.

As his shot sailed in, Kurtenbach ran up the sidelines and jumped into the Orange Krush fan section.

“It was an incredible moment,” Kurtenbach said. “I felt like I jumped really high, but later watching I didn’t jump as high as I thought. I’ve had so many great memories in Orange Krish so just running over to celebrate was an awesome experience. It felt like my heart stopped and my whole body was shaking the whole time.”

Kurtenbach said he plans for the money to go to bills and then he’ll save and invest some.

Dowling said he plans to save some and also donate some to charity.

Both Dowling and Kurtenbach said they’re big basketball fans, but didn’t play in high school. Instead, they’ve just messed around, but both said they’ve made half-court shots before.

But they’ve been Illini basketball fans since they were freshmen, and both agreed that Wednesday’s game, including their shots, was one for the ages as it was their senior night too.

“It’s something I’ll never forget,” Kurtenbach said. “What a way to go out.”