Illinois begins to improve, now 2-1 in the Big Ten 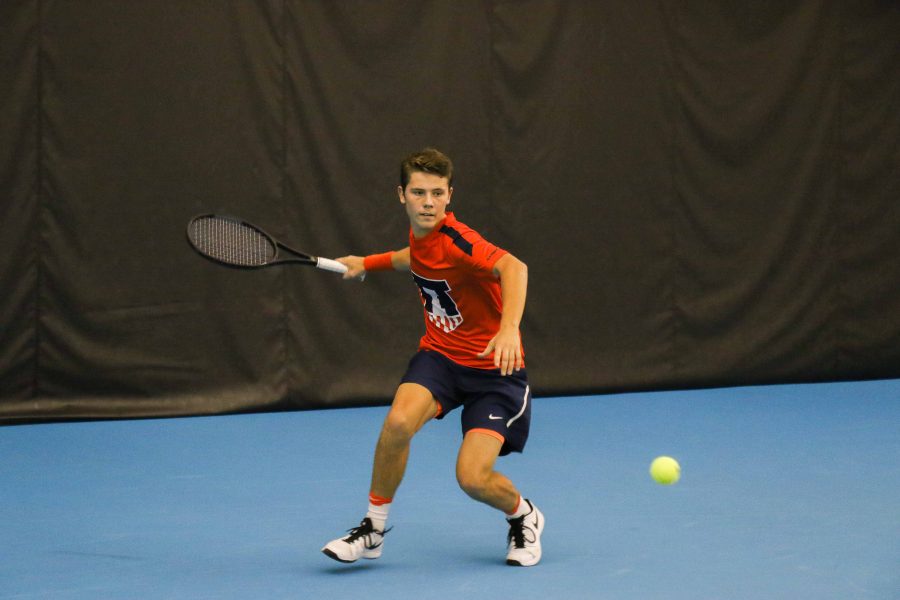 Illinois’ Aleks Kovacevic prepares to strike back the ball in the match against University of Kentucky on Friday, Feb. 24 at the Atkins Tennis Center in Urbana. The team is starting to improve now, being 2-1 in the Big Ten and 9-5 overall this season.

The No. 23 Illinois men’s tennis team didn’t begin its conference play the way it had wanted, falling 4-3 to Purdue on Wednesday.

However, the team responded with dominant performances against No. 16 Northwestern and Texas Tech this weekend.

“Credit to Purdue for playing better than us at certain spots,” head coach Brad Dancer said. “Tonight, we had some guys really step up and rise to the occasion. But that’s three guys, and it wasn’t enough.”

The Boilermakers took the doubles point early on and continued into singles with a 3-0 lead. Junior Aron Hiltzik scored the Illini’s first point of the match against Gregely Madarasz.

The fate of the match was in the hands of Illini freshman Noe Khilf. Purdue’s Athell Bennett stole an early advantage in the first set but fell to Khilf in the second, forcing a tiebreaker. However, Purdue took the match in the last set.

The Illini had better luck at home Friday.

After sweeping Texas Tech earlier in the afternoon, Illinois gave up an early advantage to Northwestern later in the evening.

Senior Alex Jesse and freshman Aleks Kovacevic lost in doubles, but the pair of Hiltzik and Vukic defeated Konrad Zieba and Sam Shropshire. The point was decided by a tiebreak between Northwestern’s Chris Ephron and Michael Lorenzini and the freshman team of Zeke Clark and Gui Gomes. The Illini lost the set, and Wildcats earned the doubles point.

Later on in singles, the Illini retaliated.

Wins from Vukic, Kovacevic and Clark boosted the Illini to a two-point lead. Hiltzik clinched the match for Illinois by defeating Konrad Zieba in three sets.

“Northwestern is a great team,” Dancer said. “They have great players up and down the lineup, but I think we can play better than we did tonight, but at least our competing was back.”