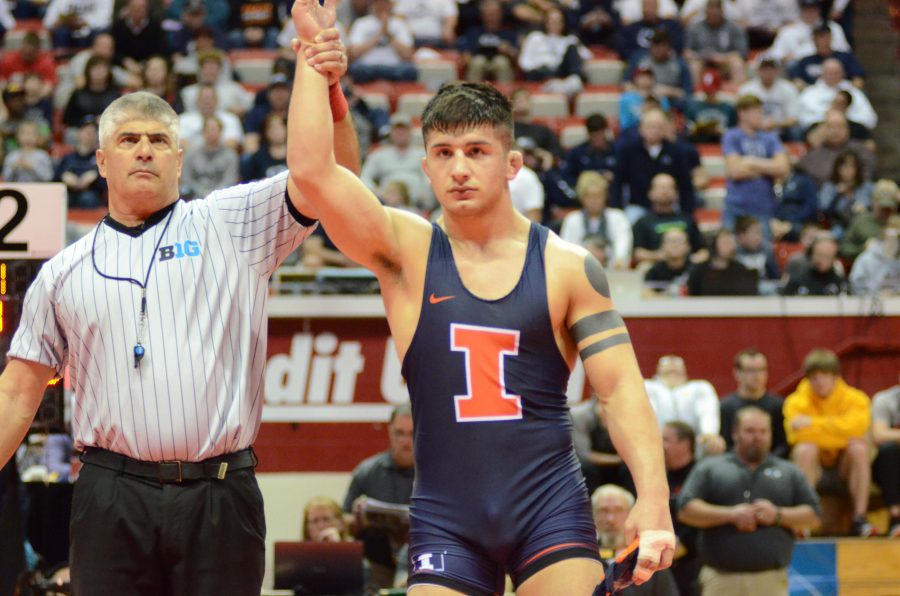 Isaiah Martinez wins his third Big Ten title 10-4, and will likely be the No. 1 seed going into the NCAA tournament.

It didn’t take long for the now three-time Big Ten champion to assert himself against Michigan’s Logan Massa, jumping out to a 6-0 lead after the end of the first period, following a takedown and four-point near fall.

Martinez cruised the rest of the way, with Massa never getting within four points and claiming his third Big Ten title in as many tries, 10-4.

Martinez remains undefeated this year at 165 pounds and will likely be the No. 1 seed going into the NCAA tournament.

“(I’m) embracing who I am becoming, and that’s one of the greatest wrestlers to ever wrestle in college,” Martinez said in an interview with the Big Ten Network.

Martinez became the third Illini to win three Big Ten wrestling titles and the fifth from the school to win in two different weight classes.

Piotrowski became the first Illini true freshman to qualify for the NCAA tournament since 2011.

Eric Barone took eighth at 149 pounds, but only the top six wrestlers get guaranteed bids at that weight class.

Black and Barone will both have to wait until March 8 when the NCAA releases the full bracket for its tournament.

The seven Illini who qualified will be in St. Louis for the NCAA tournament on March 17.