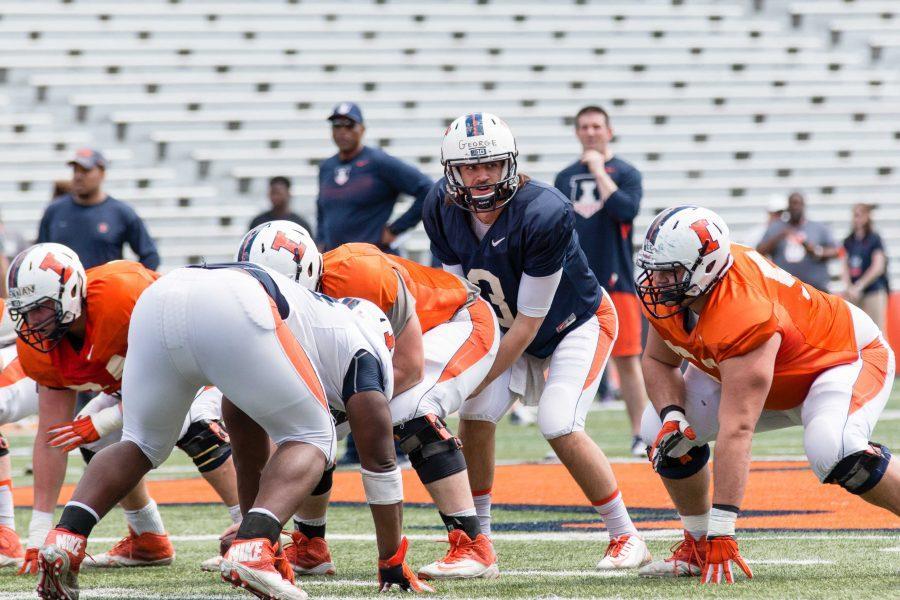 The Illini are certainly not the Buckeyes.

Almost one year to the date after Illinois Director of Athletics Josh Whitman hired former NFL head coach Lovie Smith, the hype seems to have worn off.

Fewer than 100 fans and six media members lined the stands at 11 a.m., the advertised start time for the team’s only open spring practice.

After a three-win campaign last season, many Illinois fans said they have reason to be less than optimistic about the upcoming season.

But Illini fan and spring practice attendee Paul Mogged is not like most of those fans.

“I’m excited for the future of this team,” Mogged said. “We feel like we got a steal with Lovie Smith, and we see nothing but upside coming this way. We’re not battling for (Mid-American Conference) players; we’re going after big players, and Illinois football is on its way back.”

Fans, like Mogged, were sparse and spread out among the west stands and awaited the team to take the field at 11:15 a.m. to begin stretching.

Dylan Westemeier was another one of the fans occupying the west stands. The current Eastern Illinois linebacker transferred from the University of Dubuque (Iowa) after last season.

Westemeier said he could not miss watching a Division I team run drills, especially when former All-Pro linebacker Hardy Nickerson heads its defense.

“(The Illini) really thrive to do their best, and their technique is almost perfect,” Westemeier said. “There is so much at the linebacker and running back positions at Illinois that you just have to admire.”

The EIU linebacker said he is optimistic for Illinois football’s 2017 season because of signs of growth from the Illini last year, highlighted by a win over 2016 College Football Playoff participant Michigan State.

Smith, who took pictures and signed autographs for fans following the open practice, is also excited to begin looking ahead to next season. Illinois opens its slate against Ball State on Sept. 2.

“With how we structured spring ball, it will be an easier flow (this year),” Smith said. “After next week, it becomes about recruiting. Then we’ll be focused on Ball State and our Big Ten opponents.”

Despite all of the high hopes inside the stadium Saturday, the crowd still seemed smaller than the same event one year ago. The excuses could be that Saturday was the day after Unofficial St. Patrick’s Day, and it was only 44 degrees.

It may also be that Lovie Smith is no longer new to the University.

Whatever it is, Mogged is not concerned about a slim turnout for spring practice.

“I just don’t think (the Illinois coaching staff) is as into bringing the fanbase into spring practice as other coaches in the past,” Mogged said. “I think what they’re focused on is putting a product together in the spring and having it ready for the fall when they can fill this stadium.”