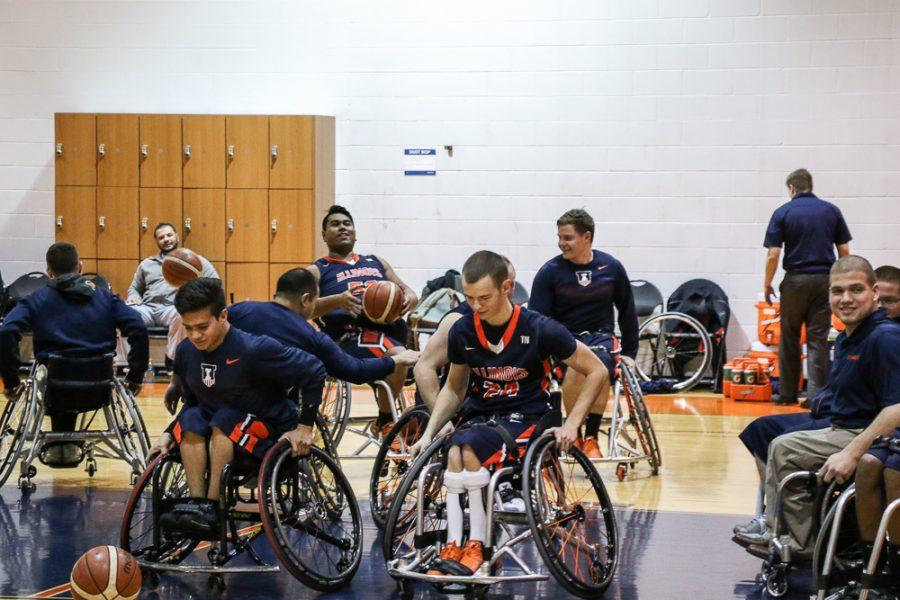 Illinois men’s wheelchair basketball practices during halftime in the match against Canadian Academy on Jan. 28. The team will head to the National Intercollegiate Wheelchair Basketball tournament this weekend.

“Mike is one of those guys that’s going to go out of control at a circus,” Nong said.

Cracking jokes is natural for Mitchell, a junior forward. He usually pumps his fist and jumps in his chair when learning what drill to run.

“Basketball is nothing to me if I’m not having fun,” Mitchell said. “I don’t play well; I don’t enjoy coming to practice. Nothing about it is what it should be. So, as you see, (having fun) is my top priority all the time.”

At a time when the Illinois men’s wheelchair basketball is eyeing a title run, the team will have to control the fooling around this week.

The Illini will play in the National Intercollegiate Wheelchair Basketball tournament against Edinboro on Thursday at the University of Wisconsin-Whitewater.

The Illini want to end their season — the last with leader Ryan Neiswender and five other graduating players — on a high note. That won’t be an easy task, knowing that this year’s teams are evenly matched.

Pat Tomic, another one of those graduating players, was quick to point out what Illinois needs to work on.

“When we say box out, we actually box out,” Tomic said. “It’s not just like, ‘Oh, are we going to box out?’ Everyone knows what’s going to happen.”

Mitchell said he is confident in Illinois’ chances against Edinboro.

Illinois needs to beat Edinboro, and Whitewater needs to win its game against Southwestern Minnesota State for the Illini to get a rematch Friday in the semifinal round against Whitewater.

“We have better leadership than they do,” Mitchell said. “We have more speed than they do.”

In their last matchup in Wisconsin, Whitewater jumped to a quick lead and capitalized on its height.

“If we come out and punch them in the face right away so to speak, I think we could take control of the game,” Mitchell said. “That’s the biggest thing.”

But for Mitchell, no matter the outcome, fun is probably in the equation.

“I think that helps me bring energy to the team,” Mitchell said. “It helps me bring up my teammates all the time. If they are having frustrations or whatever, I’m always there to help them out.”