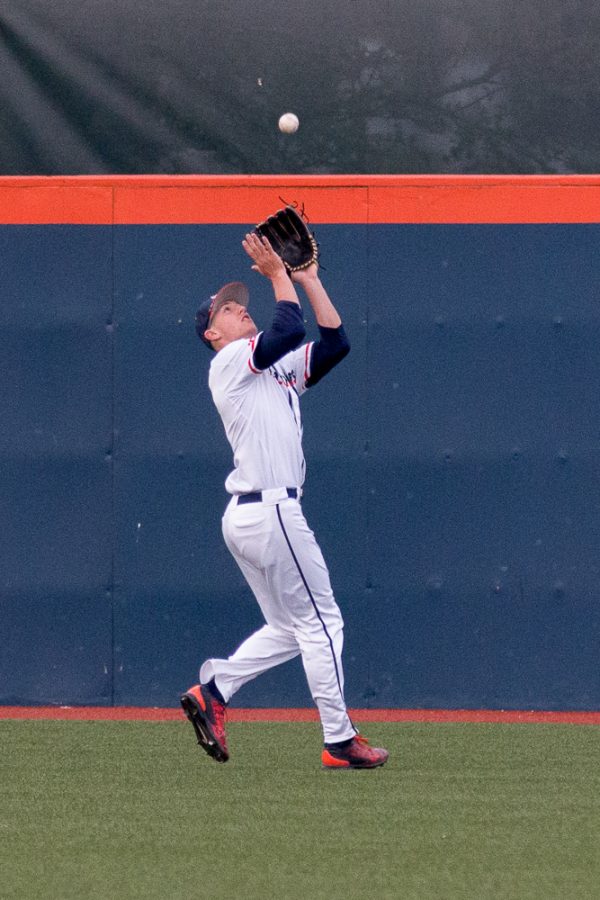 Illinois center fielder Doran Turchin gets ready to catch a fly ball during the game against Eastern Illinois at Illini Field on Tuesday, April 5. The Illini won 9-7.

The team was up against Arizona in game three. The Chanticleers had a 4-2 lead when Cunningham ran in from the bullpen to try to preserve the lead.

After putting two runners on and recording only one out, Cunningham induced a 6-4-3 double play to end the inning. The then-junior pitcher had no trouble in the eighth inning.

Then came the ninth inning; the championship was in Cunningham’s hands.

He found himself in a pressure-packed situation after giving up a run and allowing two other runners to reach second and third with two outs.

However, Cunningham came through and struck out the Wildcats batter to clinch the Chanticleers’ first national title in program history.

Cunningham and many of his teammates from the championship team will host Illinois this weekend for a three-game series in Conway, South Carolina.

The No. 21 Chanticleers have posted a 9-5 record this season and are on a five-game winning streak entering their matchup against the Illini.

Illinois will try to respond to last weekend’s performance that had its pitching staff give up 30 runs over three games.

“We are very confident in ourselves,” sophomore Doran Turchin said. “We know offensively, defensively, pitching — we’re going to get it together, and when we do, we can be scary good.”

Head coach Dan Hartleb said he sees this as a nice challenge for his team to get back on track early in the season. Even though his team has been losing, Hartleb is confident in his players and looks forward to taking the field every game.

“I’m excited every day to come to practice. I’m excited to go out and play,” Hartleb said. “We need to play as many innings as we can so that we can grow as a club, and I feel good about these guys.”

The two teams met last year in the Coastal Carolina Invitational. The Chanticleers jumped out to an early 5-0 lead and did not look back, topping the Illini, 10-4.

The following day, Coastal Carolina again began with an early 5-0 advantage. Illinois cut the lead to three in the fourth but could not keep up the offensive pressure, losing 12-4.

The offense has remained consistent for the Chanticleers this season with three of their batters hitting over .300. Sophomore catcher Peyton Isaacson is batting .382 in 34 plate appearances.

Cunningham leads the top of the rotation with a 2.75 ERA in three games started. The Illini may also have to face Zack Hopeck or Jason Bilous, who are a combined 2-1 with one complete game.

“It’s not a must-win series, but it’s getting close,” freshman Ty Weber said. “We have to handle them like any other team. We can’t ever be backed down by how good they were last year.”