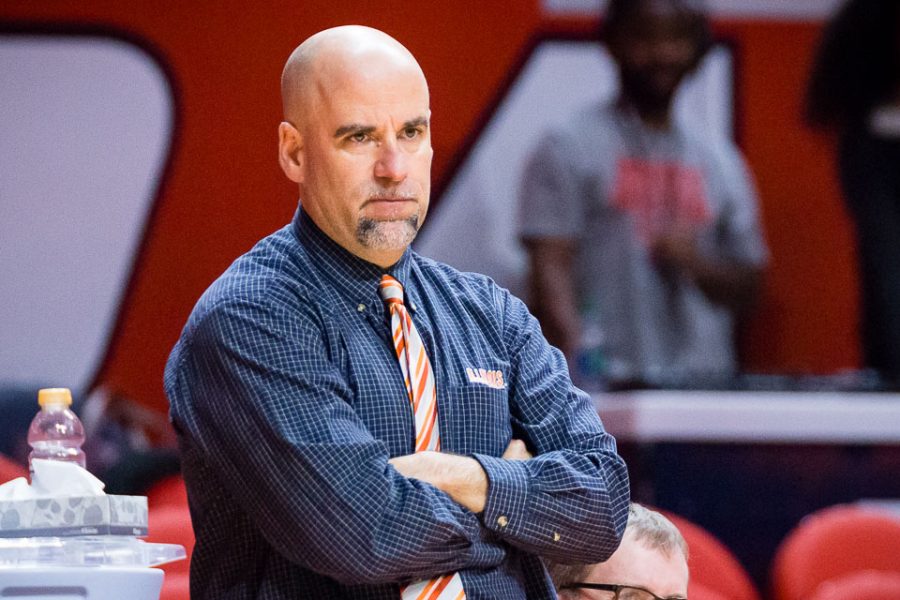 Illinois head coach Matt Bollant watches his team from the sideline during the game against Maryland at State Farm Center on Thursday, January 26.

Matt Bollant has been fired as the head coach of the Illinois women’s basketball team.

Illinois Director of Athletics Josh Whitman announced the decision Tuesday after Bollant finished his fifth season with the program. He lost his fourth season in row.

The Illini ended the year on a 11-game losing streak with just one win in the Big Ten tournament to break that streak. Illinois didn’t find any success away from the State Farm Center, losing all 12 away games, and finishing 3-13 in conference.

“Without question, the program is in a better place today than it was when they arrived,” Whitman said in a press release. “Our expectations for women’s basketball, however, match those that we have for many of our other sport programs: to compete at the highest level, year in and year out. I am excited to embrace a future for Illinois women’s basketball where we realize the program’s full – and virtually unlimited – potential.”

Bollant had his only winning season during his first year as head coach. The Illini finished 19-14 overall and 9-7 in conference play. The team also earned a spot in the Women’s National Invitation Tournament before being bounced out in an 18-point loss to Kansas State in the quarterfinals.

The Illini haven’t been invited to a postseason tournament since.

A national search for the next head coach will begin immediately, and Bollant will receive the remaining balance of his contract, which is approximately $450,000 for his one remaining year.

Before Bollant was hired in 2012, he experienced a successful career at his previous schools.

Bollant’s first season as a head coach was in 2002-03 at Bryan College. He led the Lions to a 29-7 record and a berth in the NCCAA tournament. In his final season at Bryan College, Bollant led his squad to 25 victories and the best record in the Appalachian Athletic Conference at 16-2.

Bollant’s success garnered the attention of bigger schools, and in 2007 he left Bryan College to become the head coach at Green Bay.

During all five years he led the program, the Phoenix finished with the best record in conference. In 2010-11 he reached the peak of his head coaching career, helping the Phoenix make it all the way to the Sweet Sixteen in the NCAA Tournament.

But the milestones Bollant reached at Bryon College and Green Bay would not transfer over to Illinois.

He finished his career in Champaign with an overall record of 61-94 and 22-62 record in Big Ten play.

In addition to his poor performance as head coach, Bollant’s struggled with his reputation off of the court at Illinois.

The players claimed that both coaches were racially discriminatory towards players on the team. Five of the seven players eventually transferred from Illinois.

After an investigation, the University found no wrongdoing on the part of the coaching staff, but Divilbiss still left the program in May of 2015.

In April of 2016, the University reached a settlement of $375,000 with all players involved in the lawsuit.