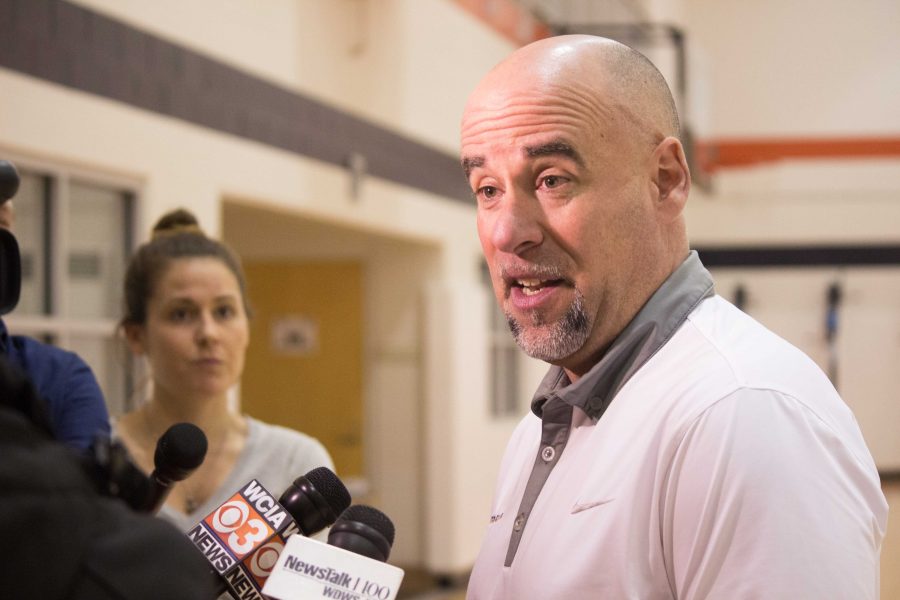 Matt Bollant addresses the press after being fired as head coach of Illinois’ Women’s Basketball team on Tuesday.

A day after his birthday, Matt Bollant was relieved of his duties as the head coach of Illinois women’s basketball.

“A lot of the same emotions that I was experiencing on Saturday, I continue to feel today,” Whitman said. “Another group of really wonderful people. But at the end of the day I have an obligation to put or student athletes in the best position to be successful on the court.”

The Illini haven’t made the NCAA tournament since 2003, so Whitman said it was time to take the program in a new direction.

In the same unusual fashion as Groce, Bollant took the time to speak to the media at Ubben Practice Facility about his tenure coming to an end.

“Obviously, (I’m) disappointed,” Bollant said. “To turn around a program especially a program that has bad culture you have to have a lot of things go right. And for whatever reason we just didn’t have enough things go right here to get it done.”

Bollant led the Illini to an overall record of 9-22, including a 3-13 record in conference. The team started off 3-2 in Big Ten play before going on an 11-game losing streak to end the regular season.

The team’s season came to an end against Purdue. Without their leading scorer Alex Wittinger, the Illini fell 72-58 to the Boilermakers. Bollant said that if Wittinger and sophomore guard Cierra Rice, who suffered a foot injury early in the season, had been healthy, the outcome of the season may have been a lot different.

In 2015 Bollant and his coaching staff were sued by seven former players. The five black players and two white players in the $10 million lawsuit said that the women’s basketball coaching staff was being racially discriminatory towards the team.

The University launched an investigation in which Bollant was found of no wrong doing, but his reputation took a hit, players transferred and he believed it definitely affected the direction of the program.

Whitman said that it is not ideal to have to search for two new coaches at the same time, but that he’s been a part of a similar process before. He added that a lot of evaluation went into his decision to shake up the men’s program and the women’s program deserved to be treated with the same respect.

The Illini only had one senior this past season, and will return with all three of their leading scorers. Wittinger averaged a team-high 14.4 points per game, freshman Brandi Beasley was named to the All-Big Ten Freshman team and freshman Petra Holesinska led the team in three-pointers.

Bollant wishes he could have stayed and helped develop his young core, but said that regardless of his departure he still wants to see the team succeed.

Whitman said that he doesn’t enjoy days like today, but he won’t be bashful in his role as athletic director.

“We expect competitive excellence from Illinois athletics,” Whitman said. “When we feel like we’re not on the appropriate track to achieve that, we will make changes when necessary.”