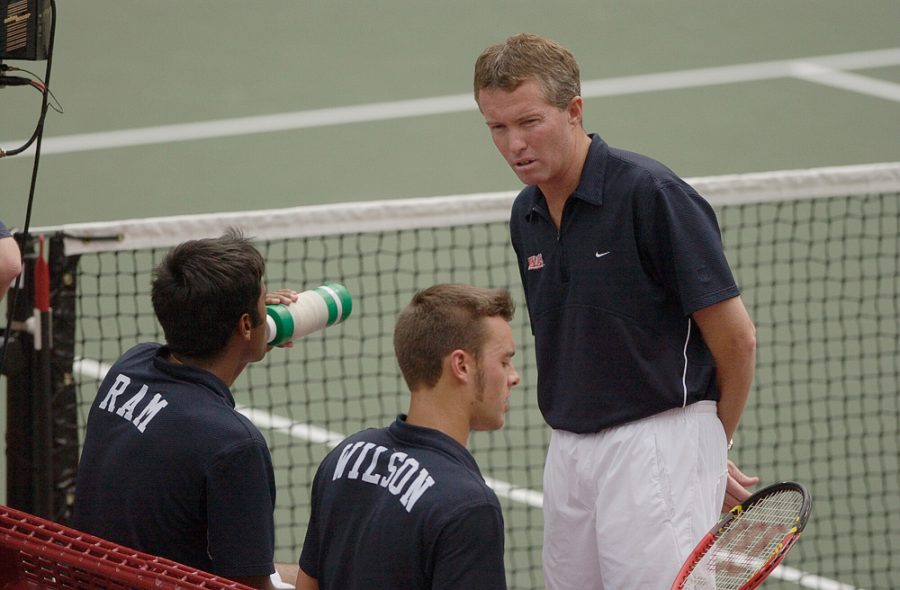 Former Illini tennis head coach Craig Tiley was recently inducted into the the inaugural class of the Illinois athletics Hall of Fame for revitalizing the team and making it a national contender.

This plan explicitly laid out every step Tiley would take as head coach of the Illinois men’s tennis program. But Tiley also had a short version.

And it was this moment that completely turned around the Illini, helping the team to become the perennial powerhouse that it is now and helping Tiley become a member of the inaugural class of the Illinois athletics Hall of Fame.

The final step, which guaranteed a national title within 10 years, would have seemed absurd at the time.

There was a power scale in college tennis drastically favoring schools in warmer climate.

A handful of schools had a total stronghold on the college tennis crown with the title alternating between Stanford, UCLA, USC and Georgia since 1977 when the current tournament structure was put in place.

Then there was Tiley’s inexperience.

He played on the pro circuit for three years, but he had never coached college tennis.

But Illinois’ program was at a low point.

For 15-straight seasons before Tiley entered Guenther’s office, the Illini were at the bottom of the food chain in the Big Ten, going 53-76 over that span.

Illinois was about as far away from a national championship as a program could be.

But Tiley sold Guenther on his plan, and the Director of Athletics was ready to take a chance on him.

“I don’t think it was his intent to get involved at the level that they had him involved,” Guenther said. “But after a series of meetings, I challenged him, and asked him if he would be interested in something like this. Then he came back with a plan, and we both looked at it, and I told him I was going to give him the opportunity to do this.”

Tiley saw the Illini tennis program as a challenge. He knew his teams would have plenty of doubters and critics, but he only wanted to use them as motivation for his team.

“I had been told by many Big Ten people that Illinois would never be a tennis powerhouse,” Tiley said. “It wasn’t a tennis school. It was in the middle of the Midwest, and it was too cold. I liked that. I liked that people said that. It was motivating.”

The 10-year plan wasn’t the only promise Tiley made in his time at Illinois.

He specifically remembers the Ohio State head coach coming up to him to tell him his doubts. Tiley challenged himself and his program then.

“Give us one year, and we will never lose to Ohio State,” Tiley said.

And they never did.

The Illini won their first Big Ten regular season title in over 50 years in 1997.

Then in 2003, Illinois won its first national tennis title in school history. His 2003 team went undefeated on its way to the title, and that winning streak reached 64 matches across multiple seasons.

Tiley’s last season as Illinois’ head coach was in 2005.

By his final year, the Illini were dominating the Big Ten year-in-and-year-out, winning eight-straight regular season titles. In the past three seasons, Illinois had a national title, a semifinal finish and a Round of 16 finish.

All of those records and milestones made him an Illinois legend, and in February, Tiley was announced as a member of the inaugural class of the Illinois athletics Hall of Fame.

After that 2003 season, Tiley knew he needed to try something different. He had reached his goal, and he felt like it was time to move on.

That new challenge came in the form of a phone call from Australia.

He accepted a job as CEO of the Australian Open and eventually took over as CEO of Tennis Australia, too.

It was a massive jump, going from coaching the college game to running one of the biggest pro tournaments in the world and the sport for an entire country.

But Tiley faced that challenge head on.

“I like coming in when things are in the worst possible shape,” Tiley said. “And in 1993-94, tennis at the U of I was in a terrible shape. So I liked coming in, and I liked the challenge.”

While the Australian Open was still one of the four grand slam tournaments on the professional circuit, Tiley said it was the least popular when Tiley got there.

But after 10 years, Tiley has made his mark.

The 2017 Australian Open, which finished up in January, was the most-watched tennis tournament in history.

While he may be geographically as far away from possible from his former program, Tiley still keeps up-to-date with Illinois athletics.

He and his wife — a graduate of the University — closely follow the Illini, and he has kept in touch with former players.

Tiley made it a goal and soon enough a habit to bring in some of the best players in the country to the University during his tenure. Some of those players went on to have careers on the pro circuit, and Tiley will often cross paths with them at his tournaments.

“I was very close to the people I worked with,” Tiley said. “The thing I get a big kick out of is seeing a person accomplish something that they didn’t think was possible. I feel a big sense of pride when that happens.”

In his first year running the Australian Open, there were five of his former Illini — Rajeev Ram, Amer Delic, Brian Wilson, Kevin Anderson and Graydon Oliver — in the main draw.

Ram, Wilson and Delic were members of the national championship team, and they were integral to its success. Ram and Wilson took home the doubles championship, and Delic brought home the singles title at the National tournament.

Ram and Tiley will talk occasionally, and Ram said he still looks back at the lessons he learned from Tiley when he struggles.

Tiley, on the other hand, thinks of his former players more as peers now that they are professional. He credited all of his success as a coach to his players.

“(This honor) is a celebration for the success of all the players that we had at that period of time,” Tiley said. “While I may have been presented the award, it is the players we have that deserve it.”

Ram said nobody deserved the honor of being inducted in the Hall of Fame more than Tiley. He said Tiley had the unique ability to make every single player seem like the most important on the team, adapting his coaching style to each player.

In a sport like tennis, where players often find themselves on the court by themselves, that sense of individualism is paramount.

“He had a special talent to tap into people and get the best out of them,” Ram said. “He taught me things about myself that I didn’t even know. Whenever I struggle with something now, I think back to try and remember how he would’ve taught me.”

Ram has had a solid professional career, mainly in doubles. He has 10 career doubles titles, as well as a silver medal in mixed doubles at the 2016 Olympics in Rio de Janeiro.

But he said what the Illini did in 2003 is something he will never forget.

And Tiley said he won’t forget it either.

He knew his plan would work out and expected to win the title. But even with all of Tiley’s confidence, Guenther had a hard time feeling the same way when he was watching the Illini play in the National Championship match in person.

“I can’t really describe it,” Guenther said. “If you’ve never watched tennis before, it is like a root canal. It is a long event. So many matches go into so many situations that could go either way. It was a long day and a long night, but it was very exciting.’

Tiley’s legacy as a college coach does not stop at Illinois.

After the Illini won the title, fellow coaches came up to Tiley, not only to congratulate him, but to also thank him for proving that it was possible for a team to win other than the four who ruled over the sport for so long.

After 2003, Baylor, Pepperdine and Virginia all won national titles.

Tiley will be returning to the U. S. this summer to attend one of the events scheduled to honor the inductees.

Despite the success that he has had all over the world, he will never forget where it all started — with a plan and the right people in 1992.