Fahey hopes to accomplish even more with Illinois women’s basketball 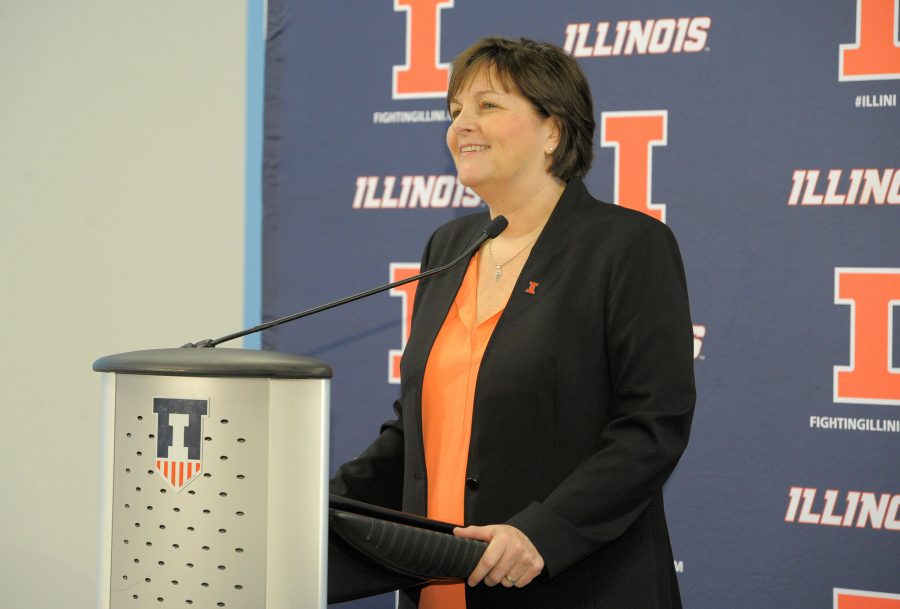 Over the course of its 43-year history, Illinois women’s basketball has won 604 games.

The Illini’s new head coach, Nancy Fahey, is the quickest coach to reach 600 wins in NCAA history. She accomplished the feat at Washington University, a Division III school in St. Louis, during her 31 years as head coach.

Since becoming Illinois’ Director of Athletics back in February 2016, Josh Whitman has coined the phrase, “We Will Win.” The standard of excellence Fahey put on display at WashU certainly fits the mantra, and her winning ways were not something Whitman had to become familiar with.

Like Fahey, Whitman’s previous job was at WashU. As Director of Athletics for the Bears, he got a first-hand look at how Fahey operated and said that she was someone he hoped to work with again in the future. At the end of the 2016-17 season, Whitman had the perfect opportunity to reach out to his former co-worker.

“This was one of my bigger selling jobs,” Whitman said. “It’s hard to take someone who’s been some place for 30 years, had the kind of success that she’s had, built the kind of relationships that she has built, and then to make a change like this one is not easy.”

Fahey is one of the winningest coaches in NCAA history. At WashU, she led the Bears to 737 victories, 10 Final Fours and five national titles – including four-straight from 1998-2001.

She is also credited with having the third-longest winning streak in women’s college basketball history at 81 games. The only coach to win more consecutive games is Geno Auriemma at UConn. The Huskies won 90 games in a row from 2008-2010 and are currently on a 110-game win streak.

“I’m grateful to Nancy for her trust in us,” Whitman said. “(I’m thankful) for her vision (in) what Illinois women’s basketball can be and for making the decision to come be a part of the Illini family. We have an unbelievable opportunity here.”

Fahey will bring a résumé to Champaign full of accolades. Winning 23 University Athletic Association titles at WashU, Fahey has received a number of awards.

But despite all she has accomplished, Fahey still believes there is a lot more to achieve before her coaching days are over.

“I hadn’t necessarily thought about retirement at this point,” Fahey said. “I think I got a little more juice in me. I want to work.”

Fahey said that she was proud of all she and her players accomplished at WashU and added that it hurt to leave the Bears behind.

In 1982 Fahey began her first season of coaching at Johnsburg High School in Johnsburg, Illinois. As head coach of the Skyhawks, her squad finished 5-17, but by her third and fourth seasons, she turned the program around. The team finished with back-to-back 20-win seasons, and in 1986, she was named the Coach of the Year by the Northwest Herald.

Over 30 years later, Fahey will take over an Illinois program that has gone without a winning season in four years and has not made an NCAA tournament appearance since 2003.

Along with the struggles on the court in recent years, the Illini’s problems failed to cease off of it.

Nearly two years ago, seven former players filed a $10 million lawsuit against the University. The players claimed that the women’s basketball coaching staff was verbally and emotionally abusive, as well as racially discriminatory towards certain players on the team.

No members of the coaching staff were found of any wrongdoing, but the University did eventually settle with the players for $375,000.

Fahey was not oblivious to what took place during the last head coach’s tenure, but is not interested in reflecting on the past.

“I understand it was tough,” Fahey said. “But I’m looking forward. My hope is (that) five years from now we’re going to be talking about what this team did. I owe those kids that, and I plan on giving it to them.”