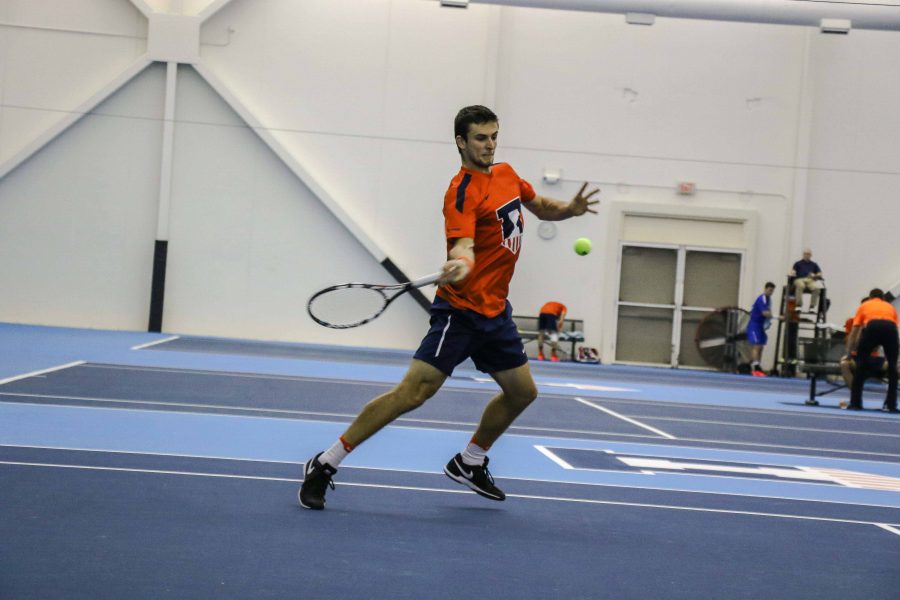 Illinois’ Aleks Vukic strikes back the ball in the meet against University of Kentucky on Friday, Feb. 24 at the Atkins Tennis Center in Urbana.

The No. 25 Illinois men’s tennis team wrapped up its west coast road trip Monday by falling to Stanford, 4-2. The Illini also dropped their contest to the Golden Bears in a 4-3 match Saturday.
California’s No. 4 doubles pair of Filip Bergevi and Florian Lakat toppled Illinois’ No. 23 duo of juniors Aron Hiltzik and Aleks Vukic, 6-2. The doubles event closed with Golden Bears clinching their second victory over senior Alex Jesse and freshman Aleks Kovacevic.
Despite the setback, Illinois came back strong early in singles.
Hiltzik collected a close victory over Andre Goransson on court two, followed by Vukic’s sweep over Lakat on court one. Freshman Zeke Clark also won over Bjorn Hoffmann on court five.
But, freshman Vuk Budic fell to California’s J.T. Nishimura, and Kovacevic and Julian Childers  also suffered losses, resulting in the team’s defeat.
The Illini then took a trip to Palo Alto, California to take on Stanford.
The Cardinals gained momentum in doubles, clinching two out of the three points.
Freshman Vuk Budic and junior Aleks Vukic secured Illinois’ only doubles win over Sameer Kumar and Michael Genender.
In singles, Vukic defeated Tom Fawcett, but the Illini came up short.
Kovacevic followed behind Vukic and earned the other Illini win over Genender in two sets.
“For our program and for the standards we set, this is a disappointing road trip,” head coach Brad Dancer said in a press release. “I do think we are learning and growing in areas but then we sometimes take steps back. As a team, we have the players. We have to find the right combinations for doubles play and the coaches have to get more out of our guys.”
[email protected]
Leave a Comment
MOST READ
1