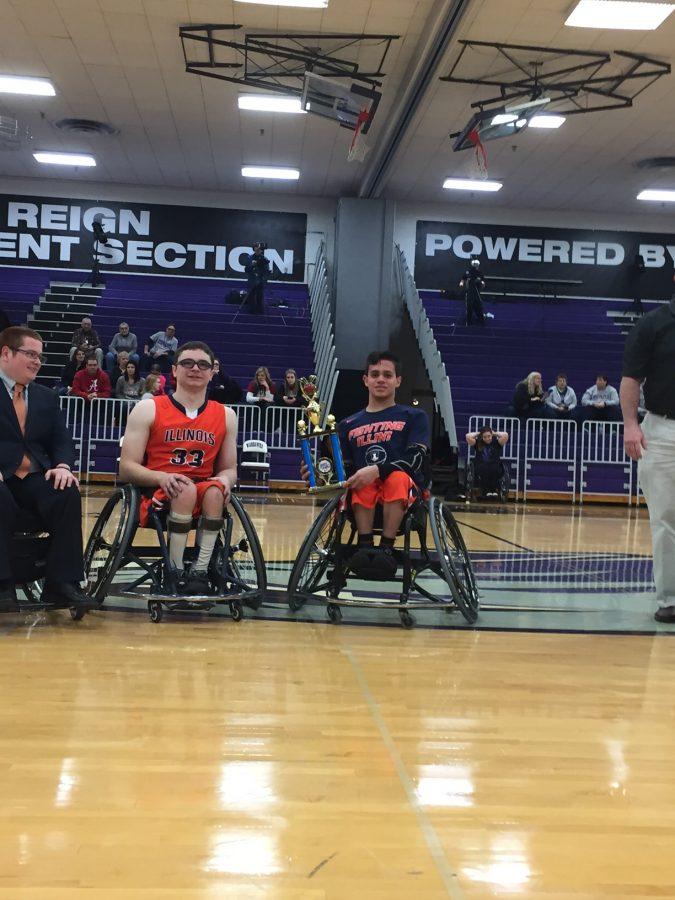 Freshman Dago Saenz and, from left to right, Colin LaFon and Tim Culbertson, holds on the fourth-place trophy after losing to Alabama in the National Intercollegiate Wheelchair Basketball Association. The loss came after defeating Edinboro in overtime and falling to rival Whitewater over the weekend.

Before Dago Saenz hit the basketball court at the 2017 Youth Parapan American Games, he had to learn parts of a language.

Saenz, who was born in Colombia and can speak fluent Spanish, is used to speaking English when playing for the Illinois men’s wheelchair basketball team. When he joined the Colombian National Wheelchair Basketball team, he had to teach himself how to say basketball words such as steal, pick and block in Spanish.

“Once I learned that I was able to communicate well in Spanish, (I was able) to help my teammates that way,” Saenz said.

Saenz, a freshman at Illinois, joined Colombia over spring break for the fourth edition of the Parapans. It ran from March 20 to March 25 in Sao Paulo, Brazil, at the site of the Brazil Paralympic Committee’s new multi-sport facility.

Saenz said he found out he made the team last fall after sharing some videos and pictures with the team’s coach.

“He was very impressed with the chair movement (and) chair skills that I’ve learned here,” Saenz said.

After hearing of his acceptance to the team, he connected with his teammates via group chat on Facebook and WhatsApp.

A week before competing, the team met for the first time in Bogota, Colombia, before flying out to Sao Paulo the next night. The teams were given a couple of days to practice together.

“It took me like one or two practices to adjust to how they played,” Saenz said. “But one, being able to remember names and two, being able to learn how each player plays on the court and how I am able to interact with them.”

On Colombia, he said the team played a more “concept-based” strategy in which players had their own roles. Saenz’s was to set picks on the opponents’ bigs or create space for his own team’s bigs. Colombia also ran plays and looked for basketball reads by searching for an open shooter and setting picks.

Despite finishing second in the overall medal count, Colombia finished fourth in wheelchair basketball after falling to Argentina, 60-38. The game started close, but Colombia fell behind after its players got into foul trouble.

“They (Argentina) are more physical than we are,” Saenz said. “So they are all up in our face, right, with the balls and stuff like that.”

He said he would be interested in competing in the next Parapans in four years. He left Sao Paulo with more knowledge of Spanish and the physicality of the game.