Top in-state quarterback for class of 2018 commits to Illinois 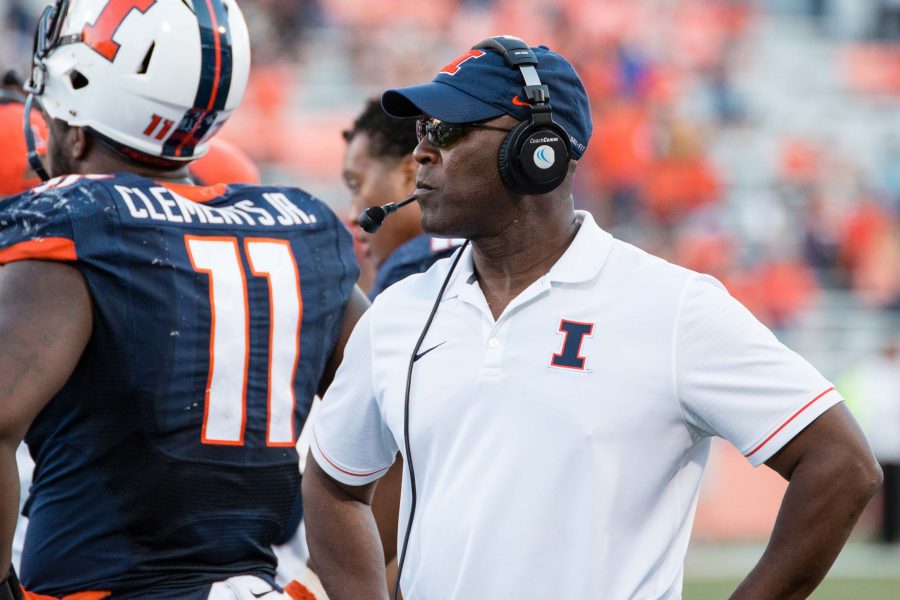 Illinois head coach Lovie Smith walks down the sideline during a timeout in the the game against Western Michigan at Memorial Stadium on Saturday, September 17. Smith made his first signing of the class of 2018, Peoria Quarterback and three-star recruit Coran Taylor, Monday.

Illinois football now has its first commitment for the class of 2018: three-star quarterback Coran Taylor of Peoria.

Scout.com ranks Taylor as the No. 1 quarterback in Illinois and No. 29 in the country for the 2018 class, ahead of former target Quincy Patterson — who chose Virginia Tech — and Wisconsin’s new signee, Ben Bryant.

Taylor put on a display at Memorial Stadium in the 5A state title game, leading Peoria High School to a 62-48 win over Vernon Hills. In the game, the 6-foot-3, 205-pound quarterback was 14-17 for 215 yards and threw two touchdowns. He added three rushing touchdowns on 18 carries for 134 yards.

It was a milestone season for Taylor, throwing for 17 touchdowns and 1,542 yards, while only throwing three interceptions. He threw 174 times, completing 97 of them for a completion rate of 56 percent.

Taylor rushed for 22 touchdowns and 1,671 total yards on 180 carries last season, about 9.3 yards per carry on average.

He helped the Peoria offense score a historic total of 807 points on the season, which was the first time a team had scored more than 800 points in IHSA history. The Lions averaged 57.6 points per game with Taylor — who told the press he knew he wanted to go to Illinois for a while — at the helm.

His commitment puts Illinois’ class of 2018 in motion. Northwestern already has five in-state players of its nine total commits and is ranked No. 12 by Scout.com.

There is a long way to go before the class of 2018 will even begin to take shape, but it’s a start for the Illini, who will look to build on Taylor’s commitment and continue to vie for future talent.