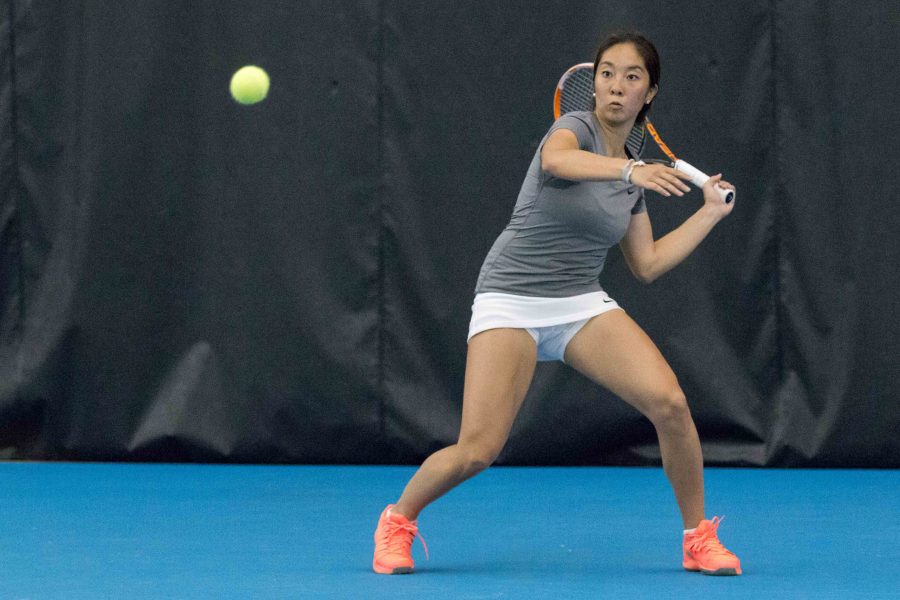 Illinois' Louise Kwong gets ready to return the ball during the match against Nebraska at the Atkin's Tennis Center on Sunday, April 3.

The Illinois women’s tennis team will continue its Big Ten road trip this weekend when it faces Indiana on Friday and Purdue on Sunday.

After losing the doubles point against Iowa and Nebraska, head coach Evan Clark said his team needs to play with more urgency this weekend.

“In both matches (last weekend), I feel like we wasted opportunities,” Clark said. “We had leads early on and let them get away from us. We have been preaching that once we get an opportunity, we have to be aware of the situation and take advantage of it.”

Illinois had a 2-1 lead against Nebraska, but the Cornhuskers scored four points in a row to win the match. Senior Madie Baillon said the loss has motivated the team to improve this weekend.

“We had a nice, long practice, did a bike workout, and lifted,” Baillon said. “That loss put us in a position that we did not expect to be in. I think it is good that everybody on the team understands that and is ready to work hard the rest of this week for Friday when we play Indiana.”

Indiana (11-9, 2- 3) lost its last match against Marquette, 4-2 and has had four matches this year where it has failed to record a point.

Clark said that since this is a road Big Ten matchup — especially since it’s on a Friday night — the Hoosiers will have an energetic crowd behind them. Their recent struggles are not indicative of the quality the Illini are expecting to face in Bloomington.

“Everyone gets up for us in the Big Ten, as you saw with Nebraska on Sunday,” Clark said. “I think Indiana will be a different team against us. They are a good team, so we have to approach each match separately and if we play well, then we will be in a position to win.”

Indiana has struggled in doubles, losing four of its last five doubles points. Despite that, Baillon said the teams needs to remain focused.

“We need to move our feet well, pump each other up and be aggressive,” Baillon said. “It is a Friday evening match at home for them so they will probably have a lot of fans there. We will need to go out there and take the energy away from them.”

After the Illini face the Hoosiers on Friday, they will travel to West Lafayette to play the Boilermakers.

Sophomore Ines Vias said the Illini are prepared for a close match against the Boilermakers.

“Purdue is a good team; last year when we played them they were really tough,” Vias said. “But we have been playing a lot of top-ten teams and have been losing 4-3 or 5-2 to a lot of them. If we can compete like that against teams of that caliber, we feel like we are prepared for Purdue and any other team in the Big Ten.”

Including this weekend against Indiana and Purdue, there are only six matches left in the regular season for Illinois.

Clark said that his team is going into this weekend with a chip on its shoulder.

“The mindset going in for our girls is that we still have a lot left to prove,” Clark said. “We certainly feel like we are a better team than our record. But at the end of the day, we have to prove ourselves in these last six matches. The end is near, so we need to be really sharp and take care of business where we need to.”