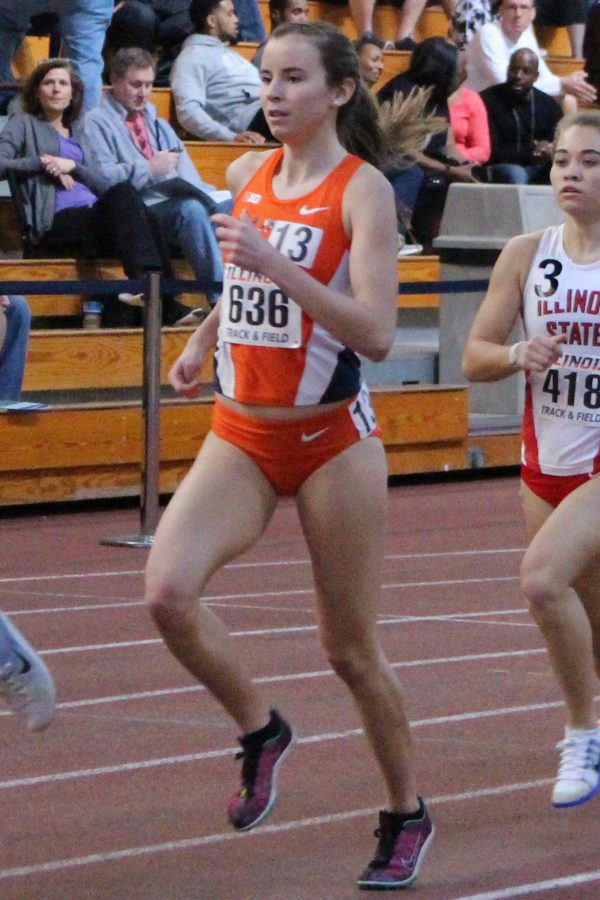 Illinois’ Valerie Bobart running in the Orange and Blue meet at the Armory on Saturday, Feb. 20, 2016

The Illinois women’s track and field team will head to the Houston Alumni Invite on Saturday after top performances from junior Pedrya Seymour and the 4×100 meter relay last week.

Multiple Illini finished in the top three last Saturday at the Big Blue Classic in Charleston, Illinois and will look to continue their momentum into this weekend.

“I’ve been pleased with the first three weeks of the season,” head coach Ron Garner said. “Over spring break, we were able to get two meets in, one at UNC-Charlotte and South Carolina. We had a productive 11 days of training, and developmentally there were some good things that took place.”

The Illini are three weeks out from NCAA Indoor Nationals and are using their Houston trip to cut down times and reorganize relays – especially the 4×100.

“Over the next few weeks, we’ll be running a few different configurations of the 4×100 that made it to NCAA nationals last year,” Garner said. “Our goal is to be in the top nine in the country. If we do that, then I think we’ve put ourselves in a position to contend for the Big Ten title.”

In Charleston, she clocked a 13.06 and broke EIU’s facility record. The coaching staff said Seymour will be added to the 4×100 later this season.

Seymour said she was happy to get her first meet out of the way.

“I was pleased, but not satisfied, I really wanted to open up faster, but it was the first meet,” Seymour said. “It was a good meet to get the jitters out, and I’m ready to compete this weekend.”

Senior Kortni Smyers-Jones trailed Seymour in the 100 hurdles with a 13.96 Saturday.

The members of the 4×100 relay are hopeful that they will record faster times in Houston, especially with different competition.

“I think the competition this week will be a bit more tough,” sophomore Jayla Stewart said. We’ll have people competing with us that run the same times that we run, so I think it’ll be really good competition going in, and I think we’ll run some fast times.