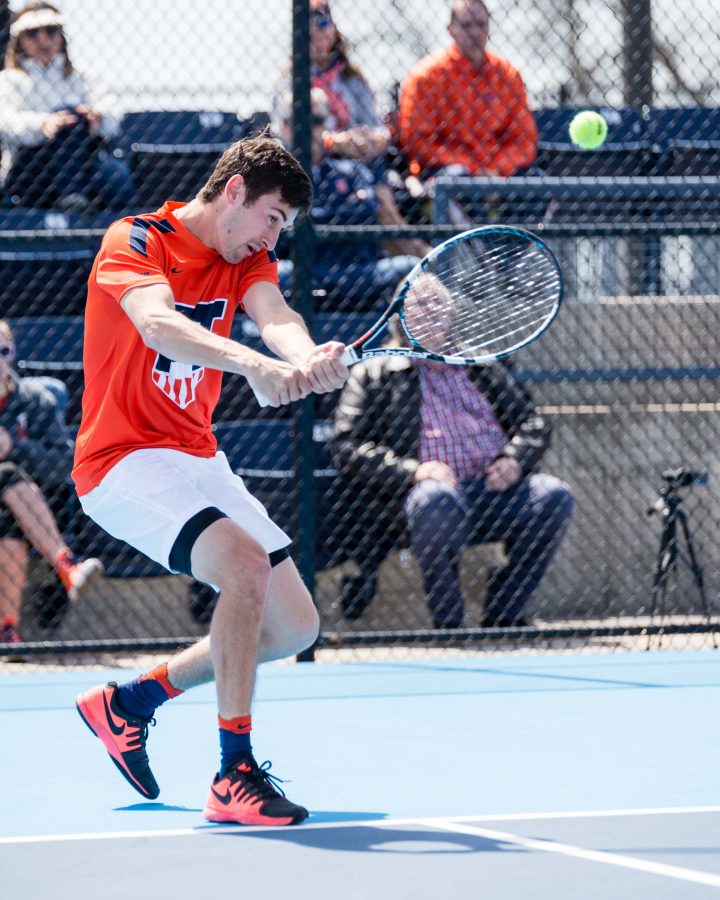 Illinois’ Alex Jesse returns a ball against Iowa at the Atkins Tennis Center on Saturday. Illinois is on a three-game win streak after defeating Iowa and Nebraska.

Aleks Vukic and Vuk Budic went to a tiebreaker with the doubles point on the line for the second time in two days.

The two had a similar performance as they did against Iowa, defeating Nebraska’s doubles pair with a huge run at the end of the tiebreaker, winning the last five points to take it 7-3.

And for the fourth match in a row, the Illinois men’s tennis team earned the doubles point going into singles play.

“Vukic and I, we just try to stay calm,” Budic said. “We’ve been in this situation before.”

Much like Saturday, Illinois never relinquished the lead after that, defeating Nebraska 4-0.

Vukic, Noe Khlif and Pablo Landa picked up wins in straight-sets to quickly shut down the Cornhuskers. It was Illinois’ first shutout since it defeated Texas Tech on March 3.

Vukic extended his singles winning streak to 15 matches, but his performance on the doubles court caught the attention of head coach Brad Dancer and his doubles partner, Budic.

“Doubles is the antithesis of his specialty,” Dancer said. “He was outstanding today; he single-handedly won that doubles point.”

Budic has relished the opportunity to play alongside the junior All-American.

“He’s a guy I look up to and the way he carries himself in his daily life,” Budic said.

While Vukic has been steady for the Illini, there were many new faces in new spots Sunday with freshmen starting in the No. 2 through No. 6 spots.

“We had a couple of guys who had too many dates they played, so they needed to sit a match,” Dancer said. “We were able to take advantage of that today and fortunately got through unscathed.”

One of those freshmen was Aleks Kovacevic, who made his first start of the year at the No. 2 singles spot along with the No. 2 doubles spot. Kovacevic and fellow freshman Zeke Clark dominated their doubles match, 6-0. Kovacevic then won the first set of his singles match before the second was cut off by the early stoppage.

It’s been a period of adjustment for Kovacevic, but he said it is nothing he can’t handle.

“I struggled a bit at the beginning,” Kovacevic said. “I’m getting better and better every day.”

This marks the Illini’s third win in a row, and Dancer was happy with the weekend results. However, he will not be satisfied with just beating the Hawkeyes and Cornhuskers. “It’s never good enough unless we’re ranked No. 1,” Dancer said.

The Illini moved to 12-9 with three wins in a row in Big Ten play, pushing their record to 5-2 in conference.

Illinois takes to the road again this weekend, competing against Michigan and Michigan State on Saturday and Sunday.