Illinois men’s tennis reveals the secret of the grunt 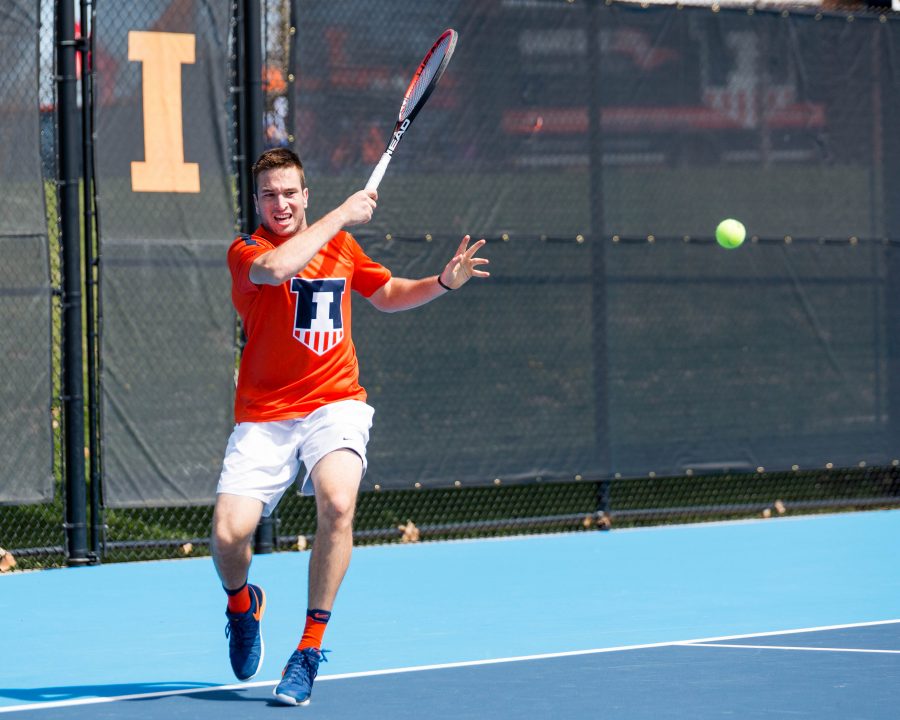 Illinois' Vuk Budic returns the ball during the match against Iowa at Atkins Tennis Center on Saturday, April 8.

There are certain sounds that go along with different sports. The swish of a basketball dropping through the hoop, the crack of a baseball flying off a bat or the smack of football players crashing into each other are all commonplace sounds in those sports.

However, in tennis, there’s a sound that rises above the racket hitting the ball or the squeaking of shoes on the court.

Whether it’s both players or just one, it is hard to watch a college or professional tennis match without hearing the guttural release of air coming from players after they strike the ball.

“I try not to think about it,” junior Aleks Vukic said. “It makes me a bit more physical and into the match; I probably unconsciously do it a lot.”

“(Grunting helps) me use my physical energy and be more focused,” Khlif said.

While both Khlif and Vukic use the grunt to help themselves, Vukic didn’t rule out that other players may use the grunt as a form of mental warfare.

Players have their own grunt, most based on the difficulty of shots. If players run and stretch to hit the ball, there’s a good chance they let out a grunt.

Vukic said he has his own preference for grunting.

“For guys I’d go for a deeper grunt; a high grunt for guys might sound a bit weird,” Vukic said.

Khlif said that there’s no such thing as a perfect grunt and that everyone has their own style. He said he believes he has the best grunt.

Vukic went with a grunt that he’s heard a lot this year — his doubles partner Vuk Budic’s.

The grunting has been working for the pair, winning two matches in a row and four of its last five doubles matches, helping the Illini to three-straight wins.

Khlif has also reaped the benefits of his grunting, winning in straight sets in each of his last three singles matches.