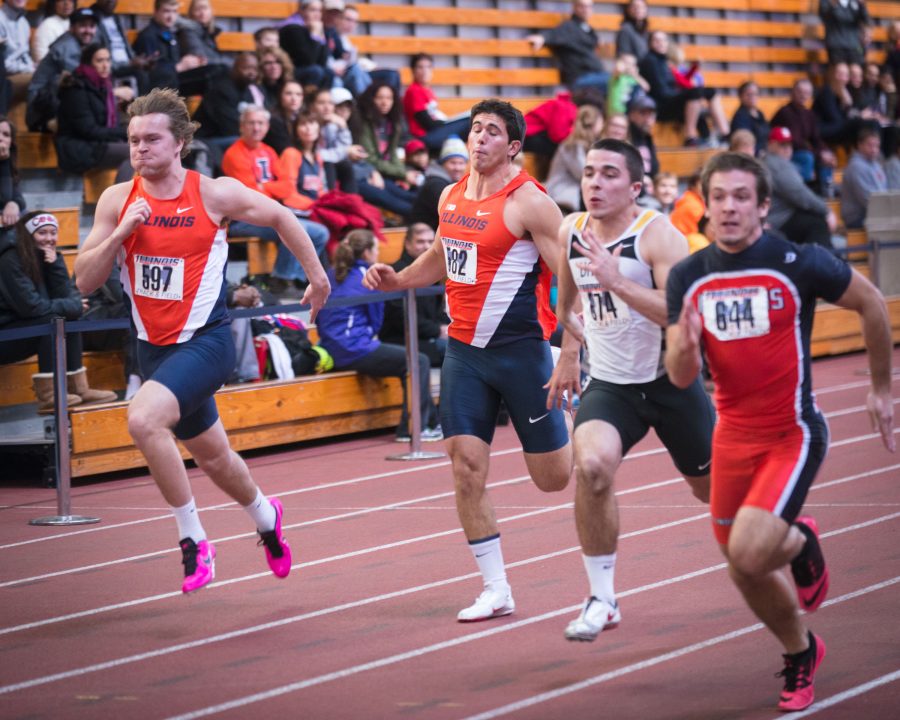 The Illinois men’s track team took second place over the weekend at the Redbird Invitational, finishing with 156 points. The Illini were 30 points behind hosts Illinois State and 23 ahead of third-place Eastern Illinois.

Illinois emerged as winners in nine individual events, with four coming in field events and five on the track.

Senior javelin thrower Aaron Wilks shattered his personal-best by 10 feet, winning the event. Wilks threw for 67.17 meters, which was good for third-best in Illinois history. The Bothell, Washington native’s previous-best was 64.04 meters, a mark he achieved at last year’s Illini Open.

Results on the field

Redshirt freshman Jacob LaRocca cleared 4.85 meters in the pole vault, which was good for a .254 meter margin of victory over Illinois State freshman Luke Nelson.

Back in hammer throw action for the first time since besting his personal record by 10 feet at the Big Blue Classic, junior Matsen Dziedzic came within a quarter inch of duplicating the feat.

He threw for 54.43 meters, close to the 59.436 meter score that he won with his last time out. Despite narrowly falling short of tying his personal record, Dziedzic’s effort was sufficient to take first, comfortably ahead of teammate Michael Hyc’s second-place distance of 55.04 meters.

Hyc followed up his runner-up finish with a title of his own, winning the shot put with a mark of 17.3 meters on his second throw. The junior reversed roles with Dziedzic in the shot put, who placed third after a third-attempt throw of 16.269 meters.

Illini get wins on the track, too

The Illini swept the relays while in Normal, Illinois. The 4×100 meter event saw Josh Eiker and Cole Henderson team up with sophomores Devin Quinn and Joe Haight. The group won the event, earning a time of 40.30 to win by more than half of a second.

Illinois won the 4×400 meter relay with the team of Haight, David Kendziera, Doug Wilson and Kenneth Allen coming in at three minutes and 15 seconds.

Haight was given Turk’s Special Award of the Week for his role in the relay victories and in setting two personal-best times in the 100-meter dash, clocking in at 10.57 seconds in the finals to take third place.

Eiker and Quinn also found success in the 200-meter dash, recording wind-aided times fast enough for the second and third-best times in Illini history, placing first and second. Eiker ran a 20.45 second total to win it, and Quinn followed behind at 20.49 seconds. Eiker’s performance caught Turk’s attention, and he named him Sprints Athlete of the Week.

Kendziera followed that with a 400 hurdles title to the Illini total, running 52.39 seconds in the event.

Other big Illinois performers were junior distance runner Tony Zea, who was the highest finisher on the team in the 1500m race — taking fourth with a time of 3:55.06 — and freshman high jumper Noah Adams, who cleared 2.01 meters to take fourth as well in his best outing of the outdoor season. Turk named Zea the Distance Athlete of the Week and Adams Rookie Athlete of the Week for their respective productions.

Next on the agenda

The Illini will split the team three ways as it heads to the west coast from April 13-15. Illinois will compete at the Mt. SAC Relays, the Bryan Clay Invite and the Beach Invite over the three-day stretch.