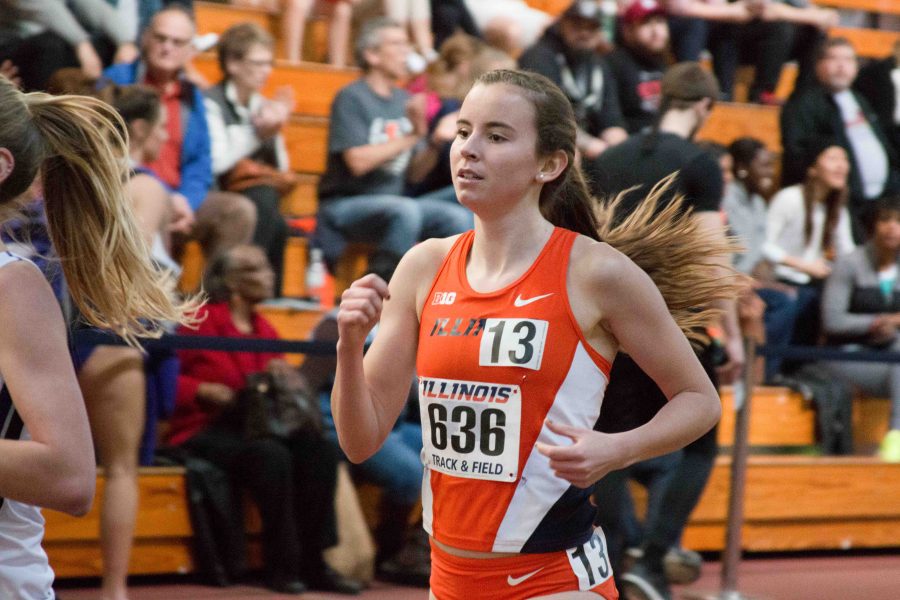 Valerie Bobart competes in the one-mile event during the Orange & Blue meet at the Armory on Feb. 20.

Four Illinois women’s track athletes will head to South Carolina and California for a chance to compete in the Gamecock Invitational and the Bryan Clay Invite, respectively.

“This will be all of our first experiences at this particular sequence of meets. Other people from this University have done it in the past, but I haven’t taken people to those particular settings,” said distance coach Scott Jones.  “There will be a number of Big Ten schools there, and I suspect that we will be matched up in the same heats with them.”

Bobart will kickstart the weekend in the 3,000-meter steeplechase Thursday night, while Choquette is set to race in the 800-meter run Friday.

Bobart is excited to run with girls who have recorded similar times to hers this season.

“The thing about this race that’s going to make it so fast is that all of the girls are running around the same time as me,” Bobart said. “I’m going to stay towards the front and hope they pull me along.”

“For each individual, our emphasis will be on their first performance, and we really want to attain clarity of purpose in that regard,” Jones said. “What we have immediate control over is going to be our primary focus.”

After a strong finish at the Big Ten and NCAA Indoor championships this year, the two are taking full advantage of the competition in California.

Rogers and Driver are also ready to face top competition this weekend at the Gamecock Invitational. Rogers said she will look to Driver to motivate her before her jumps.

“I feel like I do well with pressure, and I’m just really looking forward to it because it’s so individual,” Rogers said. “I think that competition-wise, it is really around our level standard; I think there’s some people who have jumped really high there but that’s something we’re also capable of doing and have done.”

Rogers landed a 5.84-meter jump last weekend, her best performance of the outdoors season, while Driver leaped an outdoor best of 6.06 meters. This week the pair focused on fine-tuning their approaches and jumps — something they haven’t spent a lot of time on this season, Driver said.

“In long jump, it’s all about how you feel. I like to go into competition feeling calm, relaxed, instead of hyped up,” Driver said.