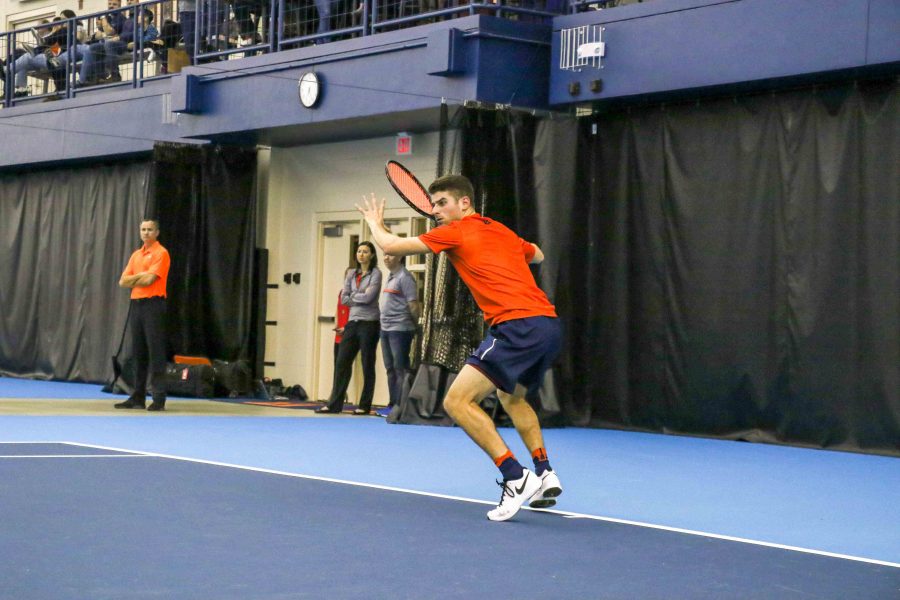 Illinois' Aron Hiltzik prepares to hit a forehand against Kentucky on Feb. 24 at the Atkins Tennis Center. The team will take on Michigan and Michigan State on the road this weekend.

The Illinois men’s tennis team understands how inconsistent it has been this year.

The Illini haven’t had a record of four or more games over .500 all year and suffered a four-game losing streak after they reached 9-5.

After the Illini won their last three matches, head coach Brad Dancer said his team has not turned a corner yet.

“We’re not where we need to be,” Dancer said. “(Right now) it’s Vukic, and it needs to be everybody else.”

Aleks Vukic is currently on a 15-match win streak in singles and has risen to No. 6 in the country. He was named the Big Ten Tennis Athlete of the Week last week, pushing his total to four this year.

As far as the rest of the team is concerned, the Illini have relied on several freshmen at both singles and doubles. In its win against Iowa last week, Illinois chose freshmen to play in the No. 2-6 singles spots with the exception of Vukic as the lone non-freshman.

Vukic has noticed the growth of the group of young Illini.

“We’ve put a lot of pressure on the freshmen to perform, and I feel like the guys have stepped up,” Vukic said.

One of the players Vukic mentioned was Noe Khlif. Khlif, a freshman from Marseille, France, has won his last three singles matches in straight sets.

“It’s not easy when you’re a freshman,” Khlif said. “Especially for me where I’m from France.”

Khlif said the freshmen have become increasingly confident on the court and more focused on themselves as opposed to what’s happening on the other courts.

If the Illini want to continue their win streak, they’re going to have to do something they haven’t done all year — defeat a top-25 opponent on the road. In fact, the Illini have only two road wins this year with just one in their last seven road games.

The Illini have had recent struggles winning the doubles point. Illinois has only lost one game all year in which they’ve been leading going into the singles matches.

“The doubles point helps,” Vukic said. “It gives us confidence going into singles.”

Illinois starts the weekend at Ann Arbor facing No. 14 Michigan, then travels to East Lansing to face Michigan State. The Wolverines have a record of 17-4 on the year and are 9-1 at home.

Michigan doesn’t quite have the star power that other highly ranked teams do with its best singles player ranked at No. 69. The Wolverines haven’t let that stop them from collecting a 6-1 conference record with their lone loss coming to No. 2 Ohio State.

Michigan State will be looking for its first conference win, and has no ranked players.

“This season hasn’t been up to expectations,” Dancer said. “Everybody can do better.”

The Illini have just four more matches before postseason play.