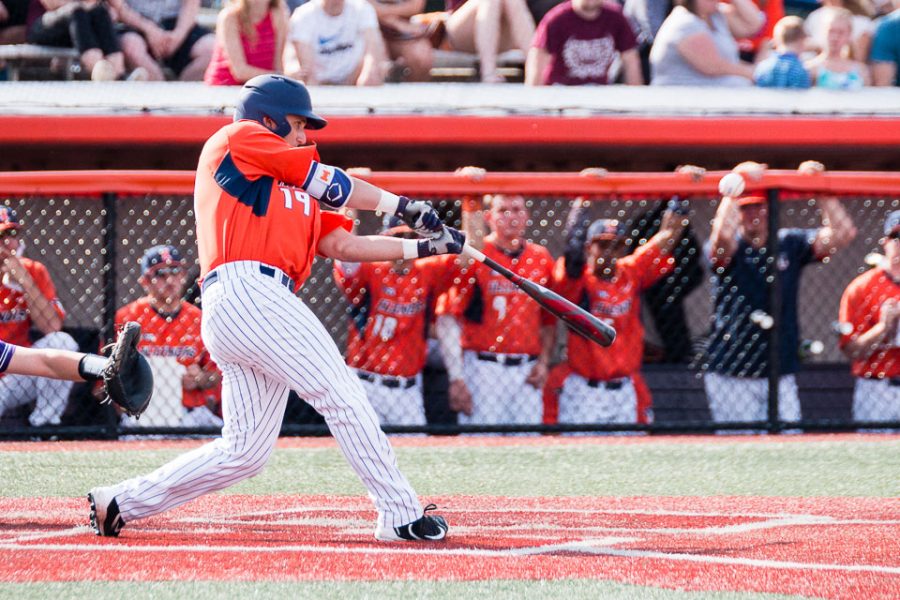 Northwestern mustered five hits through 11 innings in its 4-3 loss to Illinois on Friday.

The Wildcats doubled that total through 3 1/3 innings off Illini starter Cyrillo Watson in an 11-4 victory Saturday.

Watson attacked Northwestern hitters with his breaking ball early in the game, but control issues got him in trouble.

“We didn’t have good fastball command today, and when you go all breaking balls and hang a couple of them, you get hurt,” Hartleb said. “I felt like we were going to come back the entire game, but their pitchers put a lot of balls down in the zone.”

The elements were a problem for Illinois’ outfielders in the early innings.

Northwestern (13-21, 3-5) plated three runs before Illinois even had a chance to bat. Left fielder Dan Rowbottom battled the wind on a fly ball, and Alex Erro led off the game with a double. Right fielder Matt Hopfner hit a three-run inside-the-park home run on a fly that carried over center fielder Doran Turchin later in the frame.

Illinois right fielder Jack Yalowitz could not handle a pop fly, as it dropped in play. Northwestern first baseman Willie Bourbon continued the inning with a two-RBI triple to extend the Wildcat lead to 5-2.

“As an outfielder, it’s a little tough to play the wind,” Rowbottom said. “We have practices where the wind is like that too, and we have to make sure we’re running at any ball possible.”

Watson and two relievers hit five Wildcats and walked one in the loss.

Illinois threatened to make a comeback down 10-3 in the seventh inning with runners on the corners and no outs. First baseman Pat McInerney hit one of his three singles to drive in Yalowitz, but designated hitter Casey Dodge grounded into a double play to squash the rally attempt.

Hartleb’s team finished with 11 hits but left seven men on base.

“We hit some balls hard right at people,” Hartleb said. “If they kept the ball up more, we may backspin some out of the ballpark. We got more hits today, but we didn’t hit with men on base.”

Saturday was the 10th time Illinois allowed 10 or more runs in a game this season. The Illini are 1-9 in those game.

The rubber match for the in-state rivals is Sunday afternoon at Illinois Field. Matt Gannon is the probable starter for Northwestern. Illinois’ starter is yet to be determined. The Illini are looking to win their first Big Ten series of the season.