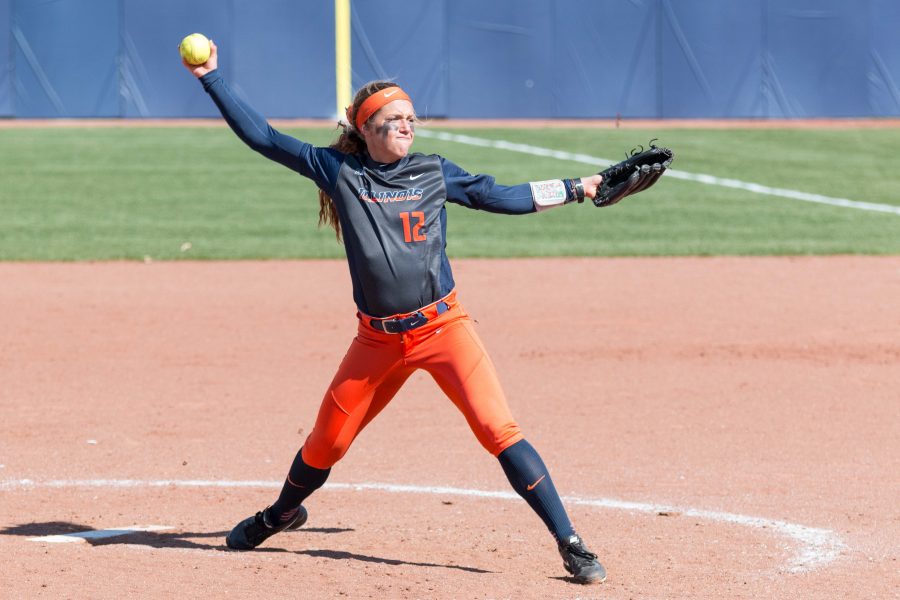 Illinois relief pitcher Taylor Edwards delivers the pitch during game two of the series against Nebraska at Eichelberger Field on Saturday, April 2. At last weekend’s LSU Invitational, the Illini won against ISU, Florida Atlantic and Troy. They lost one game to LSU.

Junior Leigh Farina had a big weekend for the Illinois softball team.

The 5-foot-5 shortstop had 10 plate appearances in three games against Michigan State and made the most of her opportunities. She batted just over .300 and recorded seven hits against the Spartans, helping lead the Illini to their third Big Ten series sweep of the season.

In the first game of the weekend, Illinois jumped out to a 2-0 lead behind RBI singles from senior Alyssa Gunther and junior Maddi Doane in the third and fourth innings, respectively. But the fifth frame was when the Illini found their offensive rhythm.

With the bases loaded and one out, senior Ruby Rivera doubled to right center field, clearing the bases and bringing in three more runs. Junior Sam Acosta was next up to bat and singled to advance Rivera to third. Farina capped off the inning by bringing Rivera home on an RBI single.

Michigan State finally got on the board in the bottom of the fifth inning thanks to an RBI single from Melanie Long and two Illinois errors. The Spartans scored again in the sixth, but the Illini would go on to win 6-3.

Senior Breanna Wonderly pitched a complete game and improved her record to 14-9. Despite giving up three runs, she tied her season-high with five strikeouts.

The following afternoon, the Illini and Spartans were back for a double-header. In the first game, Illinois jumped out to a quick 1-0 lead behind a sacrifice fly by Rivera. But unlike in the previous outing — in which Michigan State trailed the entire game — the Spartans responded by scoring three unearned runs in the bottom of the first to take a 3-1 lead.

Michigan State extended its lead to three runs in the bottom of the second inning and led 5-3 heading into the game’s final inning. But before the Spartans secured their 22nd victory of the season, the Illini proved that the game was far from over.

With the game on the line, redshirt freshman Veronica Reulius stepped up to the plate. The Illini had two runners in scoring position, and the outfielder delivered by doubling to right center field. Illinois tied the game at five and went on to win by one in eight innings.

The final game of the series proved to be a lot less dramatic than the second. The Illini used a trio of pitchers against the Spartans, but sophomore Taylor Edwards recorded the win in Illinois’ 9-5 victory. She pitched 4 2/3 innings and improved her overall record of the season to 13-1.

Rivera was the first to strike, crushing a two-run home run in the first inning. Senior Nicole Evans joined in on the scoring by recording her 14th long ball of the season. The home run also marked the 49th of her career, which is two away from tying the all-time program record.

The Illini have now won seven-straight games and are 10-2 in conference play. The series sweep also moves the team to 6-3 on the road and 31-10 overall.

Illinois will have a few days off until it plays at home Wednesday against Butler.