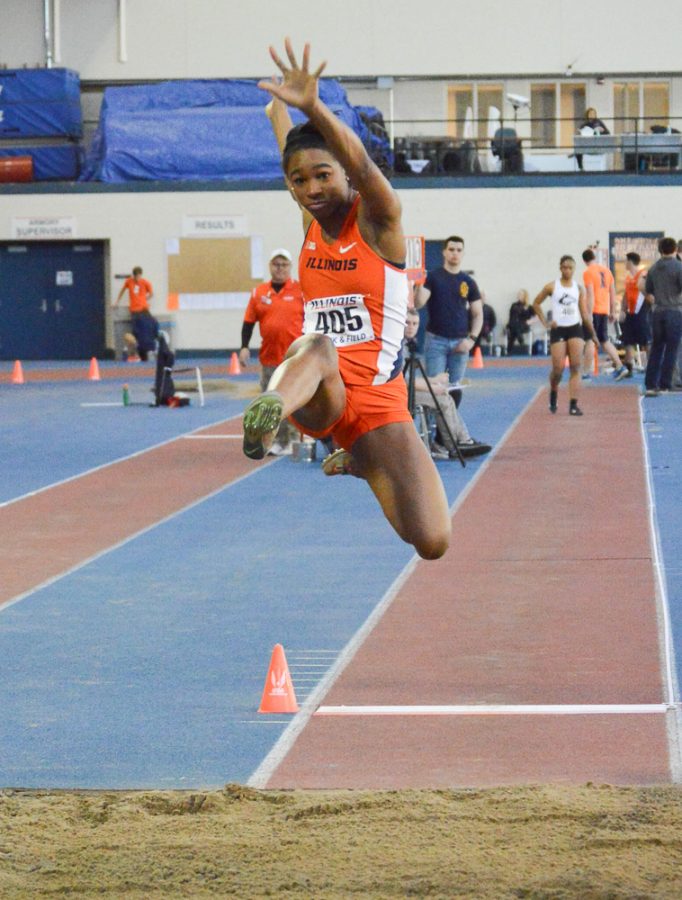 Illinois’ Janile Rogers competes in the long jump at the Illinois Orange and Blue Open in the Armory on Feb. 20, 2016. Rogers set a personal record in the 200-meter dash this weekend..

Bobart finished with a time of 10:27.46 in the 3000-meter steeplechase at the Bryan Clay Invitational. The veteran runner finished seventh in the 53-athlete field, shaving three seconds off her previous best of 10:30.70, which she set at the Drake Relays last year.

Bobart was the second Big Ten runner to cross the finish line behind Michigan’s Claire Borchers, who won the event.

Choquette cut down on her personal record time, too. She clocked a 2:06.56 in the 800-meter run at the Bryan Invitational following Bobart’s performance. The time was two-tenths of a second better than her previous record of 2:06.70, which she set at the Rankin Invitational in 2015.

“This past weekend was for (building speed); we’re happy it worked out in the sequence. It’s all part of the jigsaw puzzle of overlapping meets,” said distance coach Scott Jones. “I think we want to have balanced training, especially for a middle distance runner, which is a blending of both speed and endurance, so we’re not too far on either side of the spectrum.”

Choquette said she has focused heavily on the 800-meter race, even while competing in other distance events. Jones thinks this weekend’s personal record may be attributed to training emphasized on stamina rather than shorter speed work.

“Nicole (Choquette) was blessed to be hard-wired to run fast, so we really haven’t spent as much time focusing on that this season,” Jones said. “Doing things that are a little more stamina-based and 800-specific rather than shorter and faster.”

Choquette said she has worked on performing well through the entire race, especially with the postseason less than a month away.

“The difference is that she’s an experienced athlete now,” said head coach Ron Garner. “She just needs to get some competitions under her belt so that she can run different rhythm of races depending on how the particular race goes out.”

The distance duo aimed at running fast times, and Garner said the progress is putting the athletes in a good place.

In South Carolina, Rogers clocked a 200-meter personal record of 23.90 seconds. Garner said Rogers is ahead of schedule and also shows promise for the postseason.

“We now have two people that have run sub-24.00 second 200 meters with Pedrya (Seymour) and Janile, which is a month ahead of schedule from last year,” Garner said. “We didn’t have anyone do that until Big Ten Championships.”

Sophomore Briana Driver also accompanied Rogers in South Carolina. Although the pair’s primary focus was to jump in South Carolina, they found more success in the running events. Driver finished in 11.86 seconds in the 100-meter dash but faltered when it came to her jumps.

“We didn’t quite get accomplished what we came to do. They did everything I asked of them,” Garner said. “The thing that I’m most pleased with is the process. We came up a little short from a performance standpoint, but our effort was there.”

Rogers leaped a 5.68-meter jump, while Driver nailed down a 5.81-meter effort on her final attempt.

The Illini host the Illinois Twilight meet on Saturday. The first event is set to begin at 3 p.m.