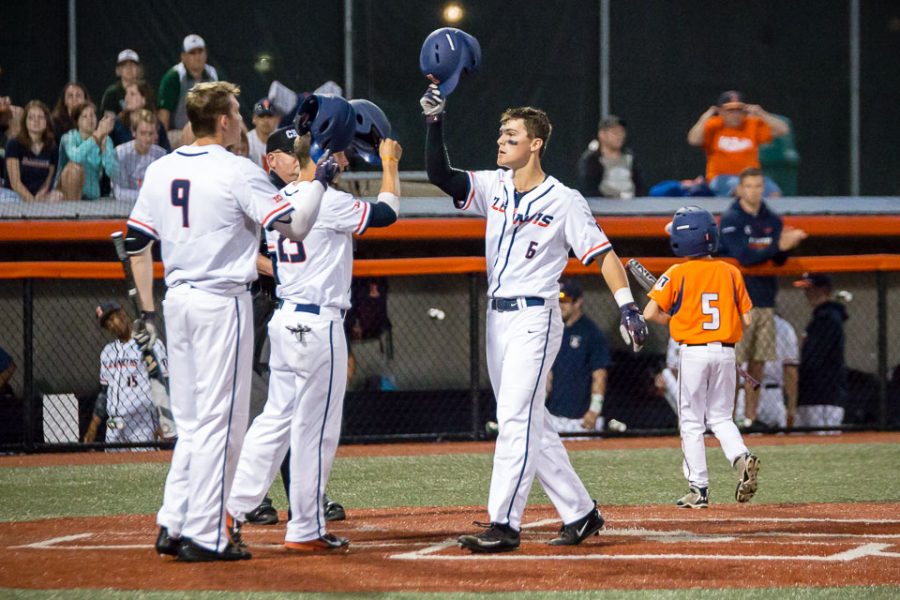 Fifteen different Illini stepped up to the plate in the non-conference matchup, but none will remember the night more than Mark Skonieczny.

The junior hit his first-career home run in the six-run third inning for Illinois (15-19). Skonieczny finished the night 2-for-3 with three RBIs and a walk.

Skonieczny said the home run was not what he was most excited about after the game, which was Illinois’ ninth win in its past 12 games.

Skonieczny was one of three Illini with a home run against the Broncos. Third baseman Trent Hammond hit Illinois’ first inside-the-park home run since 2013 in the third inning. Second baseman Michael Massey hit his fourth home run of his freshman campaign in the fifth inning.

Massey, who finished a triple shy of a cycle, said Hartleb has been looking for a different approach from his hitters lately.

“Coach (Hartleb) has been on us about trying to look for balls up in the zone,” Massey said. “Hitting home runs is a lot about getting your pitch and being on time with it, so I think we did a good job of swinging at balls in the zone.”

Illinois’ offense finished with 14 hits. The Broncos, however, assisted the Illini by committing five errors. Eight of the 13 runs Western Michigan pitchers gave up were unearned.

Bellair faced four hitters or fewer in five of his six innings pitched.

“Cole did great of having quick innings and not keeping us out on the field,” Massey said.

“I found out I was starting an hour-and-a-half before the game,” Engel said. “I’m always ready because you never know.”

Seven of Illinois’ nine starters recorded at least one hit. Left fielder Dan Rowbottom and first baseman Pat McInerney did not record a hit, but they each scored at least one run.

Illinois does not return home to Illinois Field until May 5 against Maryland. The Illini travel to West Lafayette, Indiana, this weekend for a Big Ten series against Purdue.

“The game tonight was just great momentum going to the weekend,” Engel said. “It’s a big weekend coming up, and we need to take at least two out of three (games). Having a game like this can get us really prepared for the weekend.”