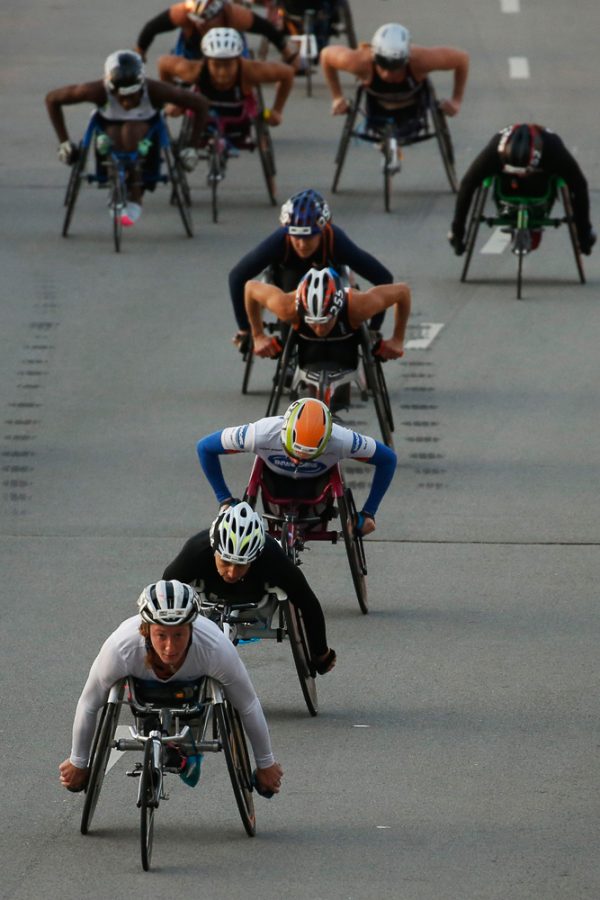 Women's wheelchair participant Tatyana McFadden (251) leads the women participants at the start of the race down down Columbus Drive in Chicago, Ill during the Bank of America Chicago Marathon on Sunday, Oct. 9, 2016. (Jose M. Osorio/Chicago Tribune/TNS)

Illinois alumna Tatyana McFadden made her return to wheelchair racing Monday with a fourth-place finish at the Boston Marathon.

The result ended her four-year streak of winning the race, but she still pulled away with the World Marathon Series X crown.

The series started last year around the same time and is a tabulation of racers’ finishes in such marathons as Boston, London, New York and Chicago. McFadden, two weeks removed from nursing a pair of blood clots in her legs, won those races last year to clinch her title with 116 points. She was 20 points ahead of Switzerland’s Manuela Schar, who won this year’s Boston Marathon.

Illinois’ Amanda McGrory and Susannah Scaroni finished third and fourth, respectively, in the World Marathon Series. McGrory, a grad student, won the Tokyo Marathon and finished second in Boston with a time of 1:33:13. Scaroni, an alum, finished fourth in the race and was four seconds behind her teammate.

Alum Josh George led the men’s side for the Illini, finishing sixth. Aaron Pike was in seventh, James Senbeta in 12th, Brian Siemann in 17th and the team’s coach, Adam Bleakney, in 21st.

The Boston Marathon was the conclusion of the Abbott World Marathon Major Series X. The next series will start Sunday, April 23 in London.

The Baltimore Sun reported that McFadden will not travel to London to give her more time to recover from her surgeries.