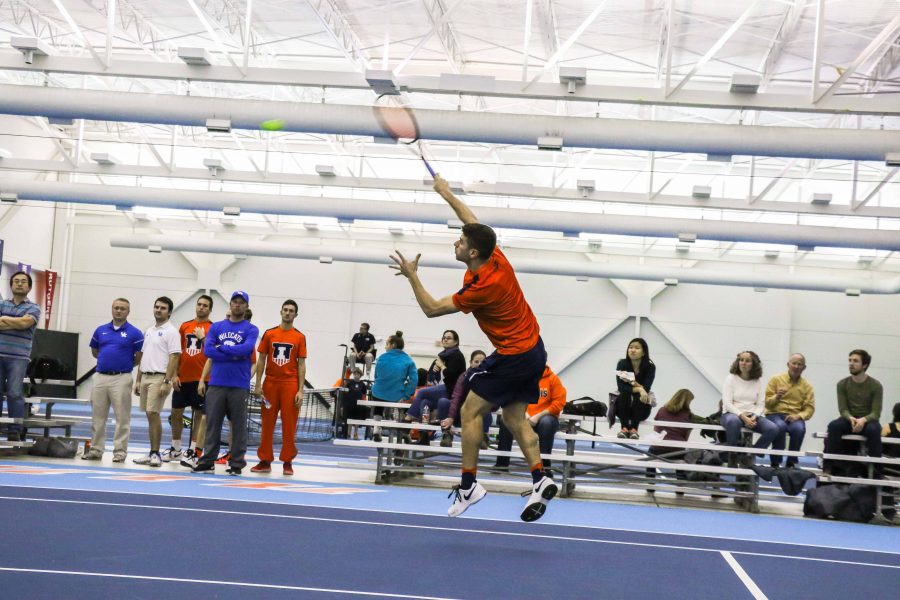 Illinois’ Aron Hiltzik hits an overhead against Kentucky on Feb. 24 at the Atkins Tennis Center. The Illini take on Penn State and Ohio State this weekend. While the team has been inconsistent this season, it is currently riding a winning streak.

It has been a season of inconsistency for the Illinois men’s tennis team.

Heading into the final weekend of the regular season, the Illini are riding a season-high, five-match winning streak.

Despite the success, head coach Brad Dancer continued to say what he’s said all year whether his team wins or loses.

“I don’t think there’s any such thing as momentum in sports because it can stop any time,” Dancer said. “I’m obviously pleased with the team getting the road wins, but sports is always ‘what have you done for me lately?’”

Illinois will have another chance to prove itself after defeating No. 14 Michigan last weekend when it takes on Penn State and No. 2 Ohio State this weekend at home.

Penn State has a record of 11-9 with a 1-3 conference record. The Nittany Lions are on a two-game winning streak after beating Minnesota last weekend. This will be Penn State’s first time away from home since April 2, when it played at Iowa, winning 4-3.

While Dancer wants to make sure the Illini don’t overlook the Nittany Lions, the task on Sunday will likely be a much more difficult one.

Ohio State has a 24-3 record and is 9-0 in Big Ten play. No team from the Big Ten has earned more than one point on the board against the Buckeyes, leading them to the No. 2 spot in the ITA rankings.

The Buckeyes also boast the No. 1 and No. 8 ranked singles players, Mikael Torpegaard and Hugo Di Feo. Both players also make up part of the Buckeyes’ two top-30 doubles teams.

For the Illini, the return of junior Aron Hiltzik should help against the star-studded Buckeye lineup.

“Aron’s an integral part of our team,” said freshman Zeke Clark. “To have him out four or five matches was not easy.”

Even though Hiltzik won, he still is in the process of getting back to where he was before.

“I don’t think I was playing my best tennis,” Hiltzik said. “I wasn’t nervous … I was proud of myself for competing hard.”

Dancer praised Hiltzik’s mental toughness and said that he’s doing well to meet both the team’s and his own high expectations.

Hiltzik’s return is just another factor pushing the team on this winning streak after a mid-season swoon that saw its record dip to 10-9.

“Midway through the season was a little rough for us,” Clark said. “To get two road wins last weekend was big.”

Another factor for the Illini is lineup consistency. While they have been enjoying the success, it’s been a rotating cast of faces — mostly freshmen — who have contributed to the winning.

“One thing that we’ve been cursed and blessed with is depth and trying to figure out where we are with things,” Dancer said. “There’s some guys that have really solidified themselves. I think we’ve got an idea where our starting six is at the moment.”

As Dancer has said, “every week is unique.”

The Illini hope this week is not that unique from the last two.