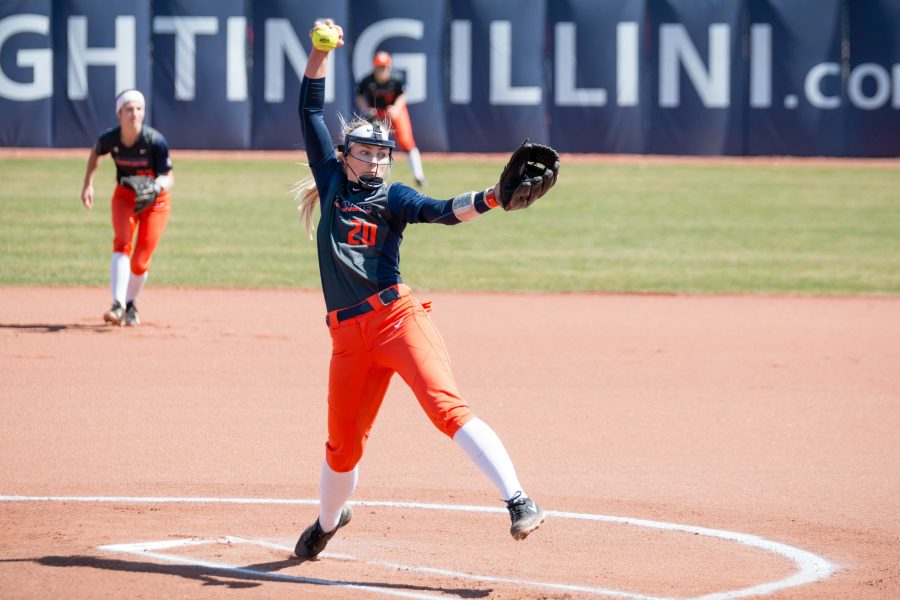 Making history was on the horizon for the Illinois softball team.

After defeating Nebraska on Friday and Saturday, a win Sunday would have pushed its win streak to 11 games — one away from the program record set back in 2010.

But instead of picking up a victory, Nebraska  shut out  Illinois in the team’s worst loss of the season. The Cornhuskers scored 14 unanswered runs, and the Illini only played five innings after the NCAA mercy rule was implemented.

Sophomore Taylor Edwards started the game but only played one inning after giving up four earned runs, three walks and one hit. It was her second loss on the mound this season and also the second of her career.

On the other side, Nebraska’s Cassie McClure recorded her first shutout of the season and improved her record to 8-7. The Cornhuskers are now 20-25 overall, while the Illini drop to 34-11. Head coach Tyra Perry said that Sunday’s game simply got away from her team.

“It was just (one of those) off days,” Perry said. “(The) team played great Friday and Saturday. It was two really tough matchups, and we were able to come away with the win, so we’re just going to focus on that.”

Prior to Sunday, Illinois hadn’t been shut out in a game since its loss against No. 6 Minnesota on April 2. Perry said that her team can learn a lot from the loss, and with nearly a week off until its next game, it will have time to regroup on and off the field.

“We have a lot of takeaways from today’s game,” Perry said. “I think we need to break some things down. (Not playing) will give us time to watch film. Also, it’s getting pretty hectic as far as the academic part of our players’ lives, so this will give them a chance to catch up and hopefully get ahead.”

Senior Breanna Wonderly was a key factor in both of the Illini’s weekend victories, despite the their not securing their fourth Big Ten series sweep of the season. She pitched a complete game shutout and only gave up three hits in Illinois’ 1-0 victory Friday. The following afternoon, she notched her 17th victory of the season.

Earlier this season, Wonderly threw the 12th no-hitter in school history, and Perry said that she has been an instrumental part of the team’s success all year long.

“Breanna is just an awesome competitor,” Perry said. “She continues to work through situations. She’s throwing with speed. She’s changing speed, so she’s doing an excellent job. We really trust her.”

Wonderly said she doesn’t contribute much offensively, so in turn she welcomes the challenge of being one of the players trusted to take the mound for her team.

Illinois’ 34 wins are two away from its total last season and more than any single-season total during Wonderly’s freshman and sophomore seasons. She recognizes that a lot has changed within the program since 2014, but also made it clear that the team wants to go places it has never been before.

“Last year, we were challenging ourselves to get to the postseason and just believing in ourselves,” Wonderly said. “This year, we believe in ourselves, so now we’re just taking the next step forward to get to where we want to be at the end of the season.”