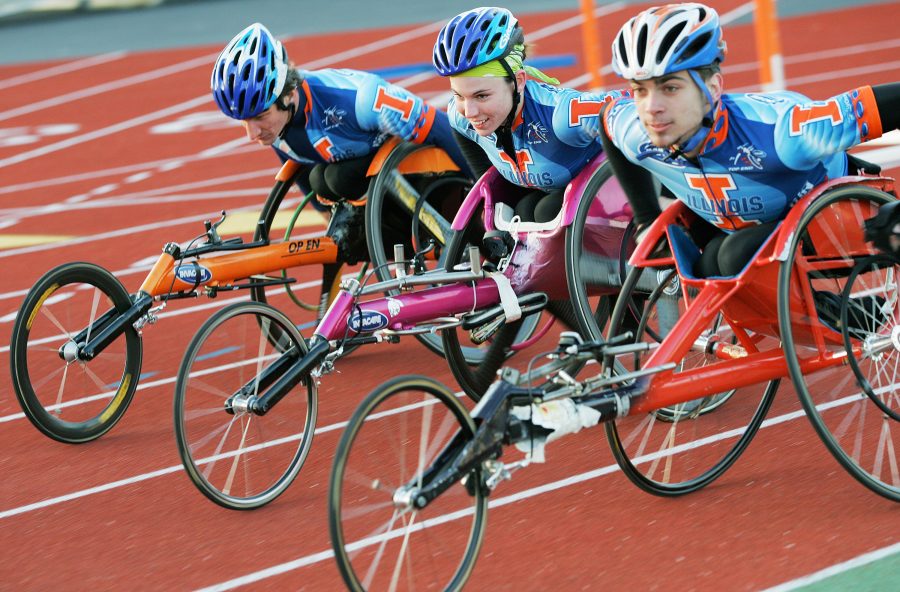 Amanda McGrory, center, who placed second in the women’s wheelchair division of the Boston Marathon on Monday, practices at the Illinois Track Stadium on Monday, April 9, 2007, with teammates Cully Mason, right, and Josh George, left, who placed 10th in the marathon.

With Tatyana McFadden out again, Amanda McGrory and Susannah Scaroni continue to set the pace for Illinois.

The two came in second and third, respectively, at the 2017 London Marathon on Sunday — mirroring their finishes from the Boston Marathon six days prior.

Like Boston, Swiss racer Manual Schar, who finished in 1 hour and 39 minutes, won the women’s wheelchair division by five seconds ahead of grad student McGrory.

This was Schar’s first time winning the London Marathon. McFadden, who competed in the Boston Marathon on April 17 while continuing to tend to a pair of blood clots in her legs, won last year’s marathon in the city. McGrory has done so in 2009 and 2011.

On the men’s side of this year’s London Marathon, racers were grouped together toward the finish line with about four-hundredths of a second separating the winner, David Weir (1:31.06) of Great Britain, and eighth-place finisher and Illinois alum Josh George (1:31.10). Illini Aaron Pike (1:31.10) was also in that cluster of racers, placing seventh.

The 2017 London Marathon was the first race of the World Marathon Major Series XI. The next major marathon in the series will the Berlin Marathon on Sept. 24.

Pair of Illini win in Champaign

As the Illinois Marathon was underway in Champaign on Sunday, Illini students Christian Clemmons and Jenna Fessemeyer won the Half Marathon. Fessemeyer (1:06.17) finished two seconds in front of teammate Yen Hoang.