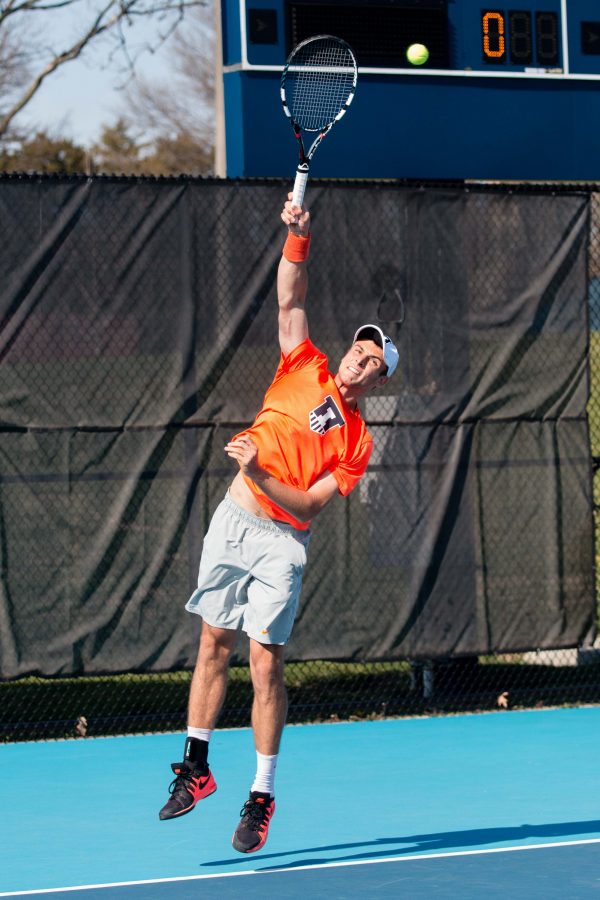 Aleks Vukic serves against Michigan State at on April 15, 2016. Ohio State defeated Illinois this past weekend 4-2.

The Illini were ready to go from the first serve, winning the doubles point behind strong performances from the doubles partners Aleks Vukic and Vuk Budic at the No. 2 spot and Gui Gomes and Aron Hiltzik at the No. 3 spot, giving them a 1-0 lead that held until the last match.

Illinois continued its strong start into singles play, as Vukic jumped all over the Intercollegiate Tennis Association No. 1 Mikael Torpegaard, winning five-straight games to take a 6-1 lead.

“I don’t think he was playing his best, so to get that first set behind me kinda gave me some confidence going into the second,” Vukic said.

A large and loud crowd — who weren’t shy to voice their support for the team — fueled the Illini.

“I wouldn’t have been able to do it without them,” Vukic said. “(I was) fighting my nerves.”

Vukic didn’t have quite as smooth of a second set but again finished strong, toppling Torpegaard 6-3. As Torpegaard’s final lob flew long, Vukic fell to his knees, letting out a passionate yell.

“These are the matches you think about after you’re done,” Vukic said.

“I’ll probably be thinking about this for a while now.”

Right after Vukic’s victory, the Illini picked up another straight-sets win behind Aleks Kovacevic, who defeated his opponent on Court Four to put them up 3-0.

The match came down to No. 2 singles, and Hiltzik, after winning the first set in a tiebreak, lost the second after being up 4-3. The third set was a thriller, with neither side pulling away.

After Hiltzik evened the score at three in the third set, the match had to be stopped to remind the crowd not to be negative toward Ohio State players.

The win gave Ohio State its 10th conference victory with no losses.

“This has been our season,” Dancer said.

“We had guys come out and play well, and just way too many courts where we’re not strong enough down the stretch.”

The loss snapped a six-match win streak for the Illini.

Illinois ended the regular season with a 15-10 record, going 8-3 in conference.

“I think we are better than what we showed today,” Dancer said.

The Illini begin postseason play at the Big Ten tournament in West Lafayette on Thursday.