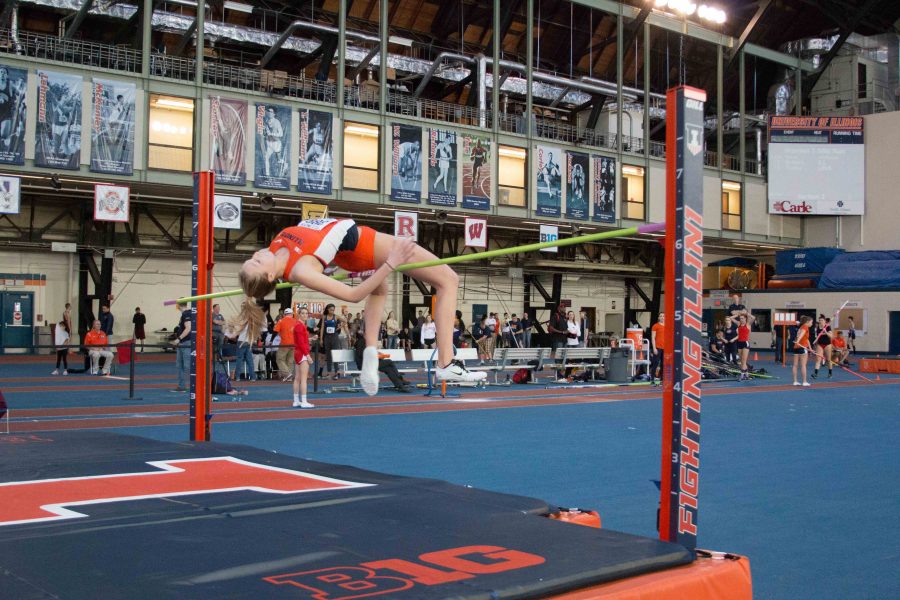 Illinois’ Kandie Bloch-Jones attempts the high jump during the Orange & Blue Meet at Armory on Feb. 20, 2016.

“With the conditions today being blustery, I thought everyone warmed-up well and took care of their business today,” head coach Ron Garner said. “The team took good leadership today. I think over the last few weeks we’ve seen improvements in multiple facets moving us forward to Drake (Relays) next week.”

The team wanted to use the home meet as an opportunity to prepare for the Drake Relays this weekend. Although the Illini will graduate seven seniors this spring, only one earned an event title Saturday.

The senior is sitting among the top 48-ranked high jumpers in the NCAA, guaranteeing her a slot in the regional competition.

“I have been practicing focusing on my approach and being aggressive to the bar, basically focusing on my last three steps has been helping to get me to the bar,” Bloch-Jones said. “High jump is so mental; honestly, how I think of it is that nothing matters until you get to the actual meet.”

In addition, Hargrove clocked an 11.93 in the 100 meter dash. She finished just tenths of a second away from her PR of 11.82 set early this season in Houston. Hargrove was the only athlete to break 12 seconds in the event Saturday.

Seymour also clocked a season personal record of 13.14 in the 100 meter hurdles, which still rivals her Olympic race result of 12.76 last year. In the 200 meter dash, she finished alongside teammates Hargrove and sophomore Jayla Stewart to sweep the event for Illinois.

In the 400 meter dash, Chisom Nwoko clocked a 56.85 after placing third in pole vault as well.

In the conclusion of the multi-title meet, head coach Ron Garner said that the team has momentum moving toward the postseason.

“This has been the trend so far, and I hope they can continue to build on it,” Garner said. “It’ll be good for them going forward to get this experience with a tailwind in case they have that at Big Ten championships next month.”