Illini Of The Week: Aleks Vukic 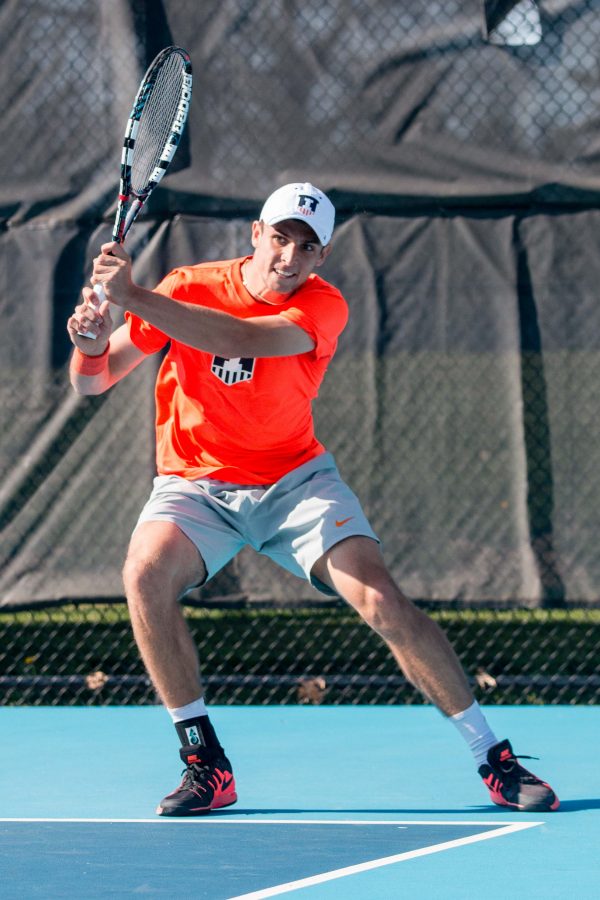 In fact, the first time Dancer ever saw Vukic play, he lost.

“I watched (former Illini) Jared (Hiltzik) beat up on him pretty good,” Dancer said. “I gave him a business card and said ‘hey, if you’re ever interested let me know,’ and he called me up a couple months later.”

Not exactly the prototype for the All-American, top-5 ranked singles player Vukic has become in three years on campus.

Dancer said that while at 6-foot-2, Vukic passed the eye test. The head coach said his height meant very little compared to the character that Vukic showed him.

Senior Alex Jesse was a sophomore when Vukic first came to the University and can vouch for the junior’s work ethic.

“From the moment he got on campus, he immediately made an impact leading by example,” Jesse said. “First one on the courts, last one to leave, always taking care of his body, even if it meant staying an extra hour here at night.”

That work ethic has paid off in full for Vukic this year with an 18-match winning streak that stretches all the way back to the start of February. His latest win came against the previously No. 1 ranked Mikael Torpegaard of Ohio State in straight sets.

Vukic has been recognized for the Big Ten Tennis Athlete of the Week five times this year, building on a program record he set earlier in the year when he won his fourth.

He has been the constant No. 1 for the Illini, who have been forced to rely on a number of different lineups and freshmen.

Dancer said Vukic’s ability to learn has both surprised him and has helped the Sydney, Australia native develop into the player he is today.

“Watching him play against Jared, I didn’t think he had good court sense,” Dancer said. “It was remarkable to me (how quickly he picked things up).”

“He’s a shark in the water,” Jesse said. “When he smells blood, he pounces.”

Vukic isn’t just a shark on the court; he’s also pounced on the opportunities off the court.

Dancer said Vukic is getting everything he can out of both tennis and his finance classes, as well as by meeting alumni and students. The No. 5 singles player was an All-Big Ten Academic selection last year, along with winning a team MVP award, an All-American selection and a First Team All-Big Ten recognition.

“He’s both a nice guy and incredibly good,” freshman doubles partner Vuk Budic said. “He’s someone I look up to.”

Vukic hasn’t just impressed the freshman; he’s also made an impression on Jesse.

“I think the world of him as an athlete and a guy,” Jesse said.

Vukic has already proven himself as one of the top players in the Big Ten and in the country, but Dancer said there’s still another level he can reach.

“He’s got so much (room) to grow,” Dancer said. “He’s obsessed about those things every single day… he’s dragging me out to the court.”