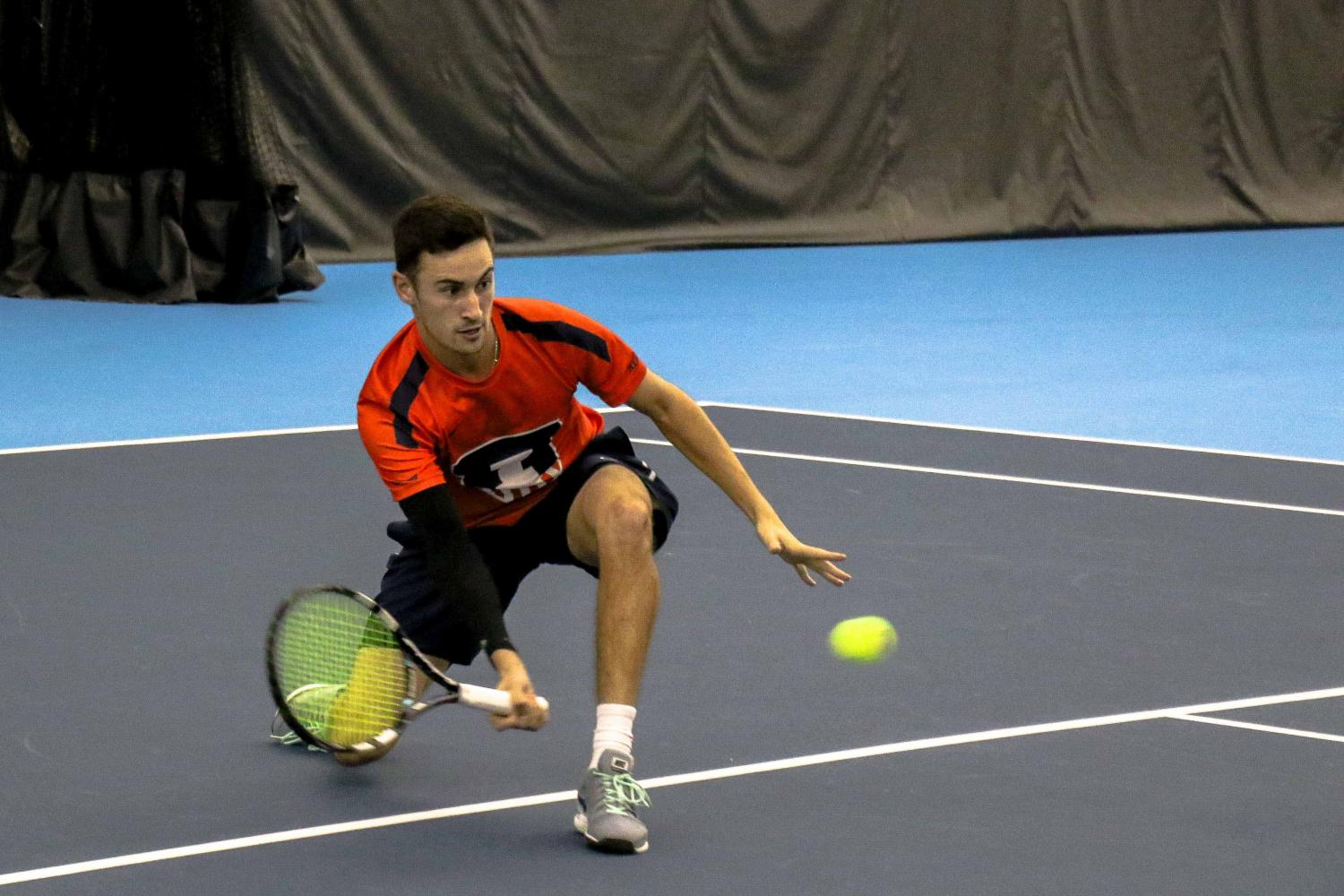 Illinois' Alex Jesse goes low to return the ball in the match against University of Kentucky on Friday, Feb. 24 at the Atkins Tennis Center in Urbana.

The Big Ten tournament starts Thursday, but for the Illinois men’s tennis team, it doesn’t start until Friday.

The Illini earned the third seed in the tournament, good enough for a first round bye, meaning they will await the winner of No. 6 seed Purdue and No. 11 seed Nebraska in the quarterfinals.

While both senior Alex Jesse and freshman Vuk Budic said they were happy for the bye, head coach Brad Dancer is wary of the rust that the Illini may have to shake off.

“In some ways, I don’t know if it’s an advantage,” Dancer said. “I think getting into a tournament and getting a match under your belt is sometimes a big advantage.”

Dancer said the team should be wary of whoever wins the match between Nebraska and Purdue because it may be more prepared due to the extra match.

The Illini have familiarity with both teams, facing both earlier in the regular season.

Illinois lost to Purdue early in March — 3-4 in West Lafayette — where the Big Ten tournament is being held. The Illini lost the doubles point and could not rally in singles play against the Boilermakers.

However, the Illini had less trouble with Nebraska, sweeping them 4-0 on April 9. The win over the Cornhuskers was part of the six-match winning streak that improved the team’s record to 15-9 with all six wins coming in conference play.

While the Illini have played their fair share of indoor and outdoor matches, Dancer said he’s keeping an eye on the weather.

“One of the biggest challenges for us this week is just looking at the forecast to figure out if we will be more inside or outside,” Dancer said. “Some guys are gonna be different with that.”

Dancer wasn’t ready to talk about Purdue, even though Nebraska has one win within the last month. Instead, he said Illinois will continue to stay focused on itself.

“Anybody in the Big Ten right now is (dangerous),” Jesse said.

The Mequon, Wisconsin, native is one of just four non-freshmen on the team, and he is ready to take on a leadership role this weekend.

“I think the message (to the young guys) is to take it one match at a time,” Jesse said. “Survive and advance.”

Budic also isn’t quite feeling the pressure of the tournament yet. He said he is excited for the opportunity to compete in the high-level competition this weekend.

The freshman isn’t worried about the health of the team, despite some of the injury problems the Illini have faced over the year.

Dancer thinks that despite the bye, Illinois still has something to prove.

“It’s a bad taste in their mouth,” Dancer said. “This is the worst position we’ve been in heading into the Big Ten tournament in my time.”

Dancer said he wasn’t sure that a tournament win this weekend would give his team a home match during the NCAA tournament due to its regular season struggles.

“It doesn’t matter; we have a great tournament in front of us,” Dancer said. “If you’re not excited to play that, then you shouldn’t have come to Illinois.”