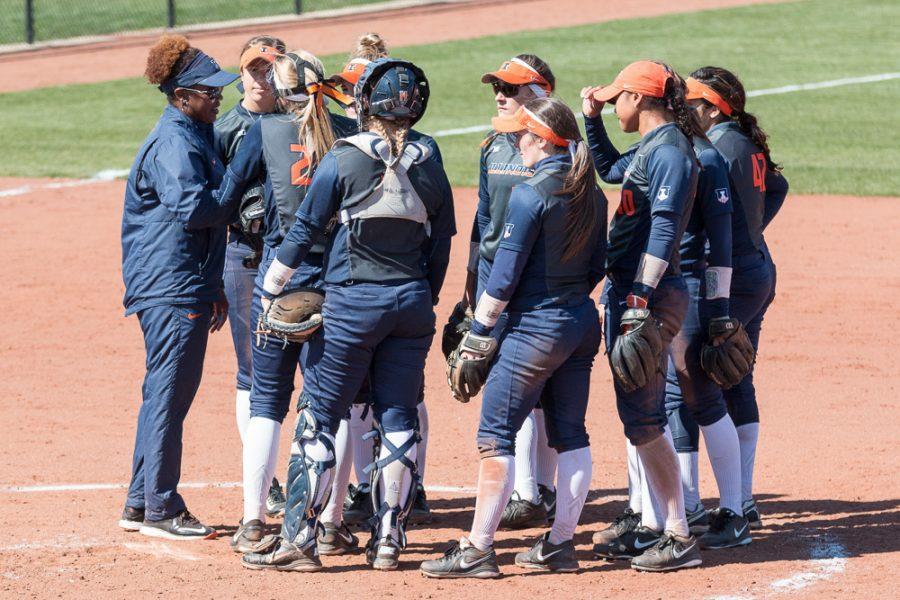 Head coach Tyra Perry talks to her team during a doubleheader March 26. Illinois’ coaches are changing the program and their methods to fit team members’ personalities, goals and skillsets.

In its last outing, the Illinois softball team left Nebraska’s Bowlin Stadium with its 11th loss of the season.

The game ended in just five innings as the Illini couldn’t find a way to stop Cornhuskers’ offensive onslaught. Seven different players recorded hits for Nebraska — totaling 13 RBIs and 14 runs. The loss dropped the Illini to 12-3 in Big Ten play and was their first loss in 11 games.

Senior Breanna Wonderly was on the mound to help the Illini secure their first two wins on the road against the Cornhuskers. But despite the wins, she was not satisfied with how her team closed out the weekend.

“We’re going to use it as motivation to bounce back,” Wonderly said. “We’re coming back (this) weekend even stronger, and (we’re going to) learn from it.”

Illinois will begin its series against Wisconsin on Friday at Eichelberger Field. The Badgers are 28-12 this season but have struggled in conference play. Wisconsin is on a two-game losing streak and is 7-10 against other Big Ten opponents.

Despite all of the ups and downs the Badgers have had — warranting a team to possibly overlook them – head coach Tyra Perry expects her team to be locked in. She said that her team’s last outing was a reminder of just how hard it is to win against any team in the Big Ten.

“(The blowout) was kind of like the perfect storm,” Perry said. “We’ve had a few of those this year, and each time we’ve come back and we’ve responded. We had a pretty tough loss against Minnesota with a pretty big score. And every time, we’d rattle off and get ourselves together and refocus.”

With no game until Friday, the team had plenty of chances to break down what it did wrong against Nebraska. But the time off also served as an opportunity for the Illini to take a step back and reflect on all they’ve accomplished.

On Tuesday, the entirety of Illinois Athletics was invited to the State Farm Center for the Fighting Illini Oskee Awards Celebration. Over 500 student-athletes, managers and cheerleaders were honored for their accomplishments in their respective sports as well in the classroom and in the community. While all sports were honored, it was clear that one team was being recognized far more than others.

“It was fun to come out and help remind our young ladies of just how hard they’ve worked and just how much they deserve success,” Perry said.

In total, the softball team took home five awards, including the Life Skills Team Competition Award — given to the team that shows the most dedication to community service during the academic school year.

Senior Nicole Evans added to her lengthening list of accolades by being presented with the Big Ten Medal of Honor, awarded for excellence on and off the field. Sophomore Kiana Sherlund was also named a finalist for Female Newcomer of the Year.

“It was fun getting all dressed up with everyone,” Sherlund said. “We’ve just been showing up at weights at 6 a.m. and waking up and going on long bus rides, and no one is wearing makeup.”

Sherlund said that everywhere she looked in the State Farm Center she saw orange and blue. And even though Eichelberger Field and her softball uniform share the same colors, she said the change of scenery was nice.

Adding to their accomplishments, the Illini also cracked ESPN’s top-25 rankings for the first time this season. Illinois comes in at No. 22 after losing only two games in the month of April. Perry has had a firsthand look at her team’s success and made it clear that the ranking is not a coincidence.

“I don’t even check (the rankings) most of the time,” Perry said. “But I think when you work hard and you focus on being a good team (and) being good players, good things happen.”