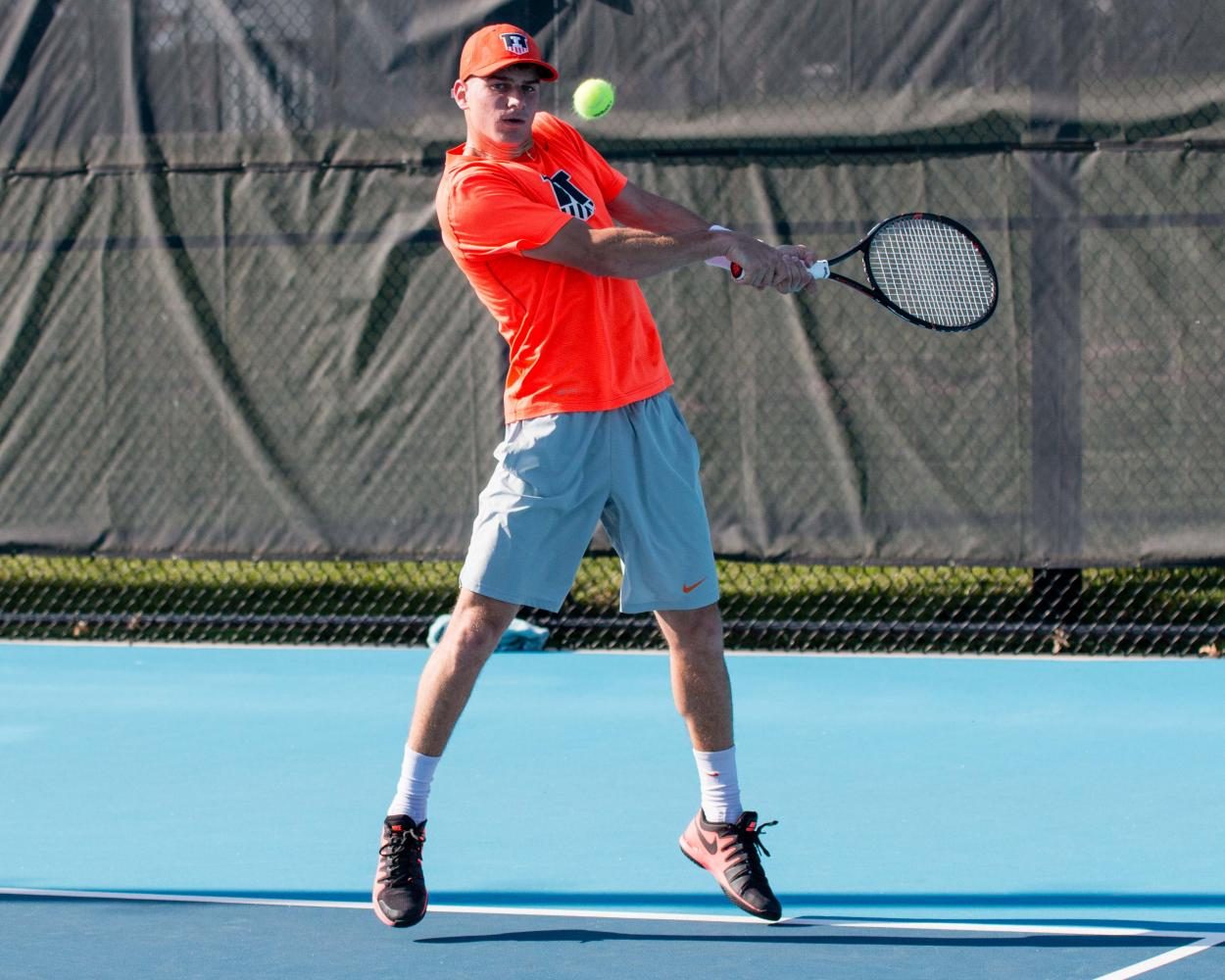 Aron Hiltzik hits a backhand against Michigan State on April 15. Michigan eliminated Illinois from the conference tournament this past weekend. They have 10 days to recuperate before NCAA.

In a span of two days, the Illinois men’s tennis team experienced an all-too-familiar swing of emotions.

The Illini avenged their regular season loss to Purdue in the quarterfinals, but could not complete a season sweep of Michigan — losing in the semifinals of the Big Ten Tournament.

“We’ve had way too many matches like this during the season and at some point, we have to get more courageous and make different types of errors,” said head coach Brad Dancer.

In both the Purdue and Michigan matches, Illinois found itself down early, losing the first doubles point in both contests.

The Illini recovered from the early deficit against the Boilermakers, winning four-straight singles points to clinch the win. The Wolverines proved a much more stout test; only junior Aleks Vukic and freshman Zeke Clark picked up wins before the Illini dropped the contest.

Dancer said he knew the Purdue match would be tough early due to a lack of playing time, but he didn’t sugarcoat the early deficit against Michigan.

“This is the second time in two weeks that Michigan has completely outplayed us in doubles,” Dancer said. “They are proving that they are better than us in doubles this year.”

Vukic has won 20 matches in a row and Saturday’s win gave him sole possession of the second-longest streak in team history. Clark also went undefeated on the weekend at the No. 5 singles spot.

Clark also went undefeated during the weekend in the No. 5 singles spot.

Dancer said he felt Clark got a bit of his mojo back after losing in straight sets against Ohio State in the regular season finale.

Junior Aron Hiltzik also provided a spark after a tough defeat against Ohio State. He was the first Illini off the court against the Boilermakers, winning in straight sets. He was ahead in the third set against Michigan before the match was stopped.

“I thought Aron was an absolute star today,” Dancer said after the Purdue win. “When he plays like that, we are a different team. He was a big leader for us today.”

Illinois is still looking for the consistency that has evaded the team all year. The Illini will have a short break for rest and practice before the start of the NCAA tournament.

Earlier in the week, Dancer said he did not believe the Illini would host a home match during the NCAA tournament.

The loss to the Wolverines did not help the team’s resume.

After the weekend, Illinois has a 16-11 record overall.  The Illini came into the weekend ranked No. 25 by the Intercollegiate Tennis Association. It was the first time the team had appeared in the Top-25 since March 21.

The Illini will learn their next opponent during the NCAA Selection Show on May 2.