Wonderly picks up 18th win in series split against Wisconsin 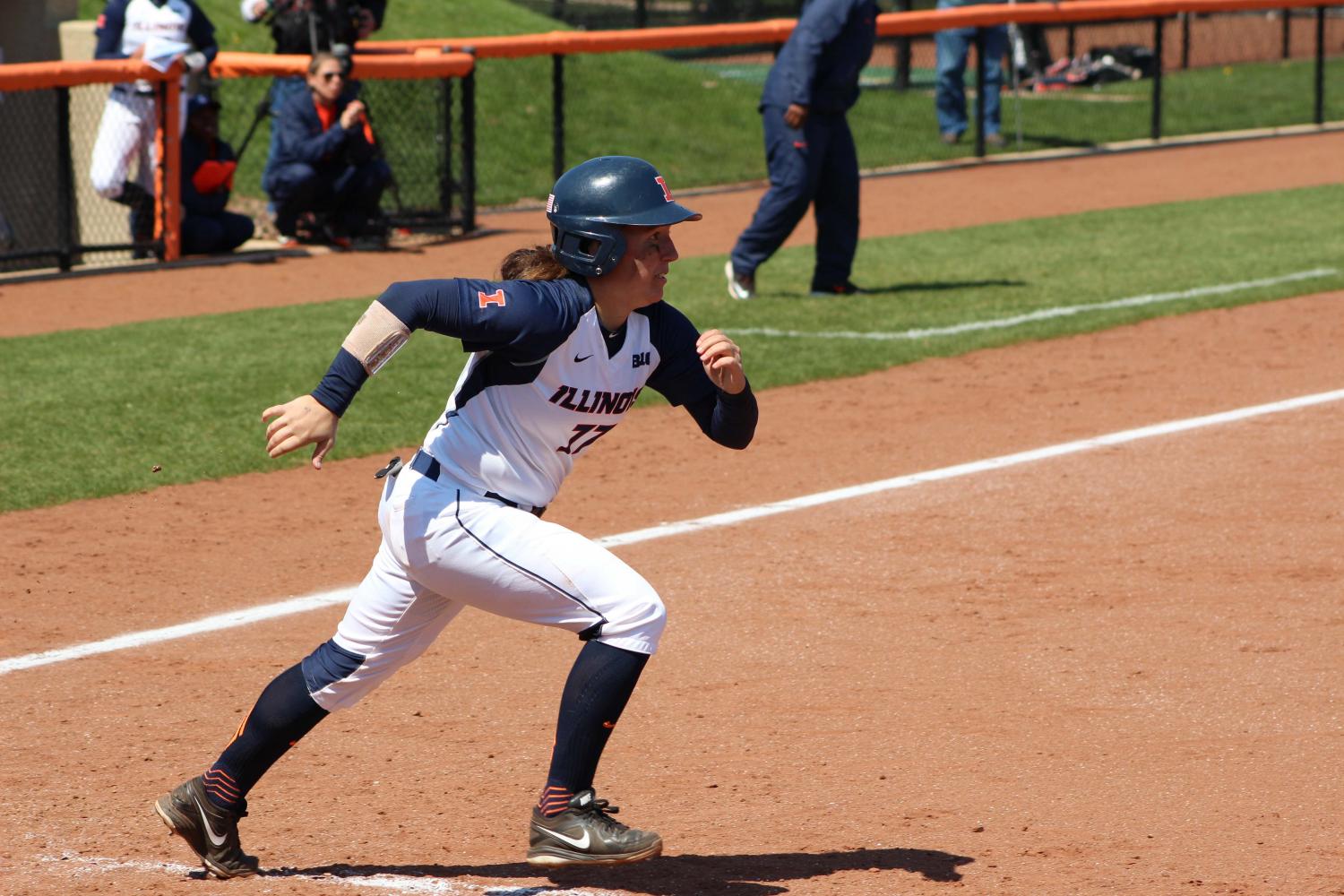 Illinois’ Stephanie Abello tries to beat out a groundball against Rutgers at Eichelberger Field on April 3, 2016. The Illini split a series against Wisconsin this past weekend.

Illinois softball had two very different performances in its weekend series against Wisconsin.

Game One was a display of the offensive powerhouse the Illini have been all season, while Game Two showed the team that sometimes disappears at the plate and cannot buy a run.

Wisconsin struck first in the contest, getting two runs on a double in the first inning. However, those were the only runs it would score the rest of ballgame.

Sophomore Stephanie Abello got the Illini on the board with a RBI double of her own in the first inning, tying the score at two.

“I’ve been struggling at the plate a little bit lately, but my coaches and teammates have stuck by me through the whole thing,” Abello said. “I’ve been getting back into the mindset of playing for them and winning as a team.”

Abello struck again in the third inning with another RBI double, giving the Illini a 3-2 lead.

Illinois increased its lead to four in the fifth frame. Sophomore Emily Brodner got hit by a pitch with the bases loaded, and junior Leigh Farina hit an RBI double the following at-bat.

After suffering a 12-0 loss to Nebraska last weekend, Illinois head coach Tyra Perry felt like her team responded well against Wisconsin on Friday.

“We just really wanted to play because when something like that happens, you can’t wait to wipe the slate clean,” Perry said. “We did a really good job of doing that.”

In Game Two, the Badgers shut out the Illini, 3-0.

Illinois appeared to have scored in the fifth inning when it loaded the bases. Junior Annie Fleming was hit by a pitch, but the home plate umpire called her back saying she was not in the batter’s box when hit.

Perry was not happy with the call the umpire made.

“It’s tough when your batters are hit in the box and don’t get the base,” Perry said. “It’s in the rulebook, and I don’t understand what happened there.”

The Badgers broke the tie with a double to left field in the sixth frame.

A hit-by-pitch with the bases loaded and a RBI single in the seventh inning gave Wisconsin a 3-0 lead over Illinois, which Illinois would not rally from in the bottom of the frame.

Senior Ruby Riveria went 2-for-3 from the plate, but it was not enough to get the Illini on the board.

Wisconsin freshman pitcher Kaitlyn Menz picked up her 20th win of the season after going seven innings, giving up no runs on four hits and striking out two at the plate.

The series finale scheduled for Sunday was canceled due to rain. The game is not getting rescheduled.

After splitting the series with Wisconsin, Illinois’ record now stands at 35-12 and 13-4 in Big Ten play. The Illini next play May 2 as they host Eastern Illinois

“We have to go out and play our game,” said senior Nicole Evans. “They’re a good team, tip our hats to them, but they are not better than us.”