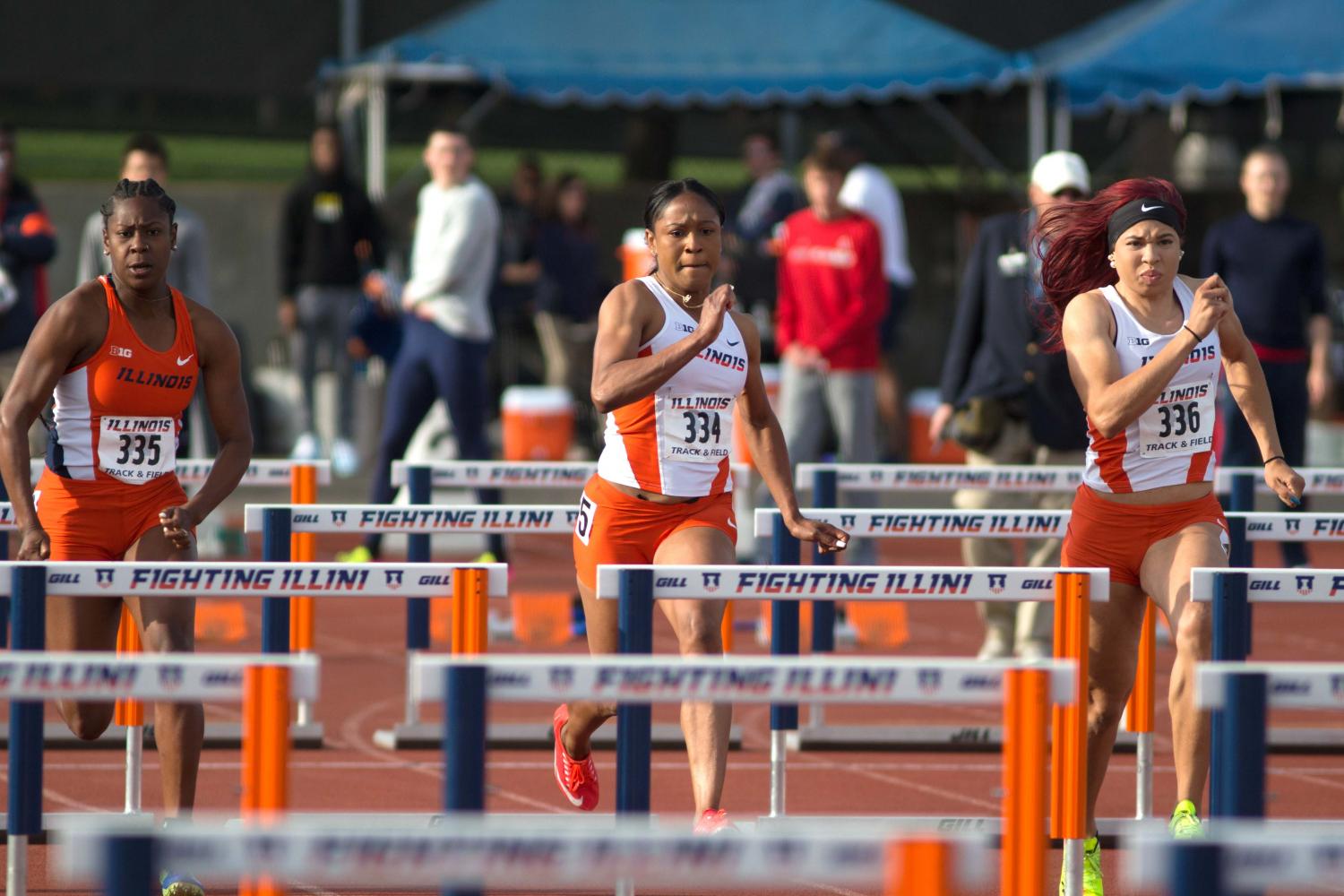 Kortni Smyers-Jones (left), Pedrya Seymour (middle), and Jayla Stewart (right) race down the track in the 100 meter hurdles at the Illinois Twilight at the Illinois Track Field on April 22. Illinois will compete in the NCAA championships this weekend.

Coming off a successful weekend at the Drake Relays, the Illinois women’s track team will compete in the Big Ten championships this weekend.

Despite dreary conditions, Illinois set personal records and put itself in a better position for the postseason.

“It’s part of execution going in and dealing with the conditions,” said head coach Ron Garner. “Our young people will have demonstrated that they’re ready to go no matter what. We’re improving; the team is committed to what needs to be done; hopefully that translates to points at the Big Ten championships.”

The Illini have dominated events including the 100 meter hurdles, high jump and sprint relays this season and are events to watch at the Big Ten championships.

Illinois hurdlers are leading the pack with two of the three top athletes in the Big Ten. Junior Pedrya Seymour sits at No. 2 with a time of 13.06, while sophomore Jayla Stewart is at No. 3 with a 13.14 personal best — a time she ran last week at Drake.

“The Big Ten conference is the most powerful hurdle conference in the country right now, even above the SEC,” Garner said. “In the conference, we have Jasmine Camacho Quinn being the defending outdoor champion. We still have Charlton from Purdue and the two young ladies from Minnesota, and Chantel Ray from Ohio State, so we have six of the best hurdlers in the country in our conference.”

However, Stewart said the tight competition will be an opportunity to shave off time and score points in Pennsylvania.

Although she didn’t open up the season running as fast as she is now, Stewart is celebrating her progress this season.

“When (other ranked hurdlers) opened up, they opened up fast,” Stewart said. “They started out running fast times; I gradually made my way up PRing every other meet or so. I’m just excited to see what happens when I get to Big Tens.”

Garner said that Stewart’s work ethic has fallen in line with an increase in competition as the season moves toward the Big Ten championship and NCAA Regionals.

“Jayla belongs with the best in the country in that event. It’s been a long time in the works for her,” Garner said. “She’s worked very hard with coach Gillon to get there, so we’re just kind of setting the next three meets up in a nice sequence for her.”

In addition to top-ranked individual hurdle performances, Illinois is also looking forward to junior Nicole Choquette’s performance in the 800 meter and Valerie Bobart in the 3,000 meter steeplechase at the Big Ten’s.

Choquette is No. 5 in the Big Ten with a time of 2:06.56, while Bobart is sixth with a 10:27.46. Garner said that the distance duo are capable of fast times and have shown improvement despite conditions at the Drake Relays.

“We had a tough few races. For Nicole, it was more of a waterfall start and 15 athletes in the 800 at Drake and miserable conditions, not a great situation,” Garner said. “Both should advance to the first round, so at the Big Ten they should be in there contending.”

Sophomore long-jumper Briana Driver and members of the 4×100 and 4×400 meter relays will also be competing next weekend. Events are set to begin Friday, May 12 and conclude Sunday, May 14 at Penn State in State College, Pennsylvania.