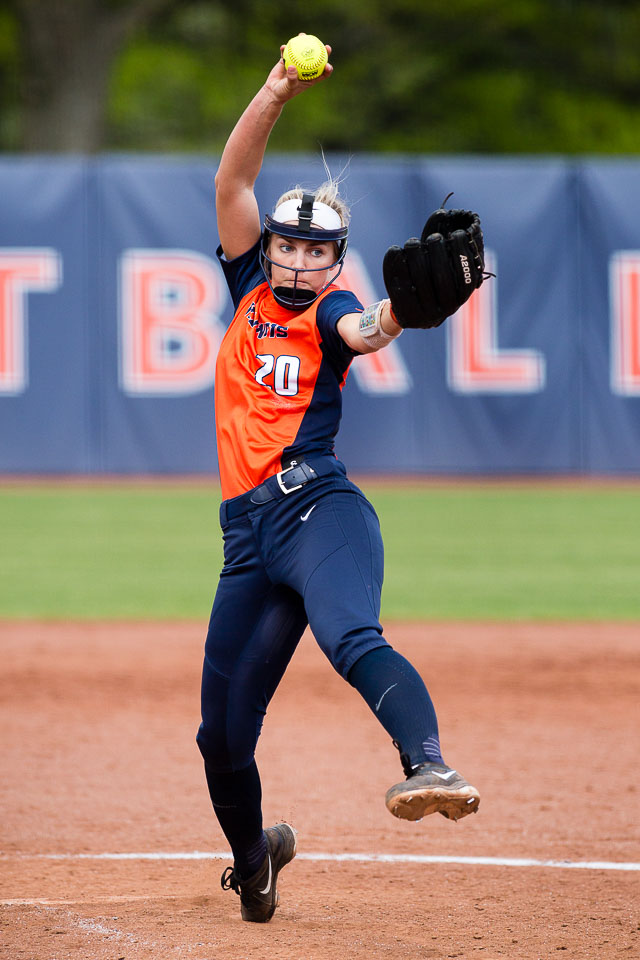 In her second year as head coach, Tyra Perry has led the Illinois softball team to 36 overall wins and 14 victories in the Big Ten.

Sherlund played 49 games for the Tar Heels before transferring to join the Illini. Perry remembers that the sophomore was very nervous the first time they met but said that she has become more comfortable since that inaugural moment.

Even still, Perry expected the matchup against the Tar Heels to bring certain emotions out of the sophomore. But when the game got underway, Perry said Illinois’ leadoff hitter – who helped with surveying the opposition – handled the moment with a lot of maturity.

“We expected her to be (emotional and nervous) maybe,” Perry said. “But she was just a professional. She told us what we needed to know and put us in the right direction as far as scouting reports and things of that nature and then came out herself and played great softball.”

Illinois defeated North Carolina 6-2 for its first victory of the season and left Puerto Rico with an unblemished record and four wins.

The Illini didn’t slow down when they returned to the United States. The team pulled off three conference series sweeps this season and went on a 10-game win streak which began April 7 against Purdue and was finally snapped two weeks later in a blowout loss to Nebraska.

Despite losing by 14 runs, Perry was proud of what her team achieved and expected it to bounce back. She said that having the NCAA mercy rule implemented during its game would help remind her squad that regardless of record, no team in the Big Ten can be overlooked.

In addition to what the team has accomplished collectively, a pair of seniors have pulled off some notable feats as well.

On March 24, in Illinois’ opening Big Ten game against Iowa, senior Breanna Wonderly threw the 12th no-hitter in school history and was one batter away from having a perfect game. The Hawkeye’s Kaitlyn Mullarkey was hit by a pitch in the first inning and was the only batter to reach base.

“You don’t focus on the no-hitter during the game because that’s when you jinx it,” Wonderly said. “I had complete trust in my defense and teammates behind me to help me out.”

Senior Nicole Evans has also made her way into the Illini history book and all season long has proven to be her team’s unquestioned leader. Evans is top-10 in the Big Ten in slugging percentage, on-base percentage, RBIs, doubles, home runs, total bases and walks.

Earlier this season, she became Illinois’ all-time leader in RBIs after a grand slam against Purdue. In an interview with the Big Ten Network following the game, Evans took a moment to talk about what was going through her mind when she recorded the fourth grand slam of her career.

“I just remember thinking in my head, ‘Crush this ball,’” Evans said, “(I was thinking), ‘It’s about time. Go after this pitch, and if you miss, you still have a few more strikes, and if you hit, great.’ As soon as I hit it, it felt pretty good.”

On Senior Day, Evans also moved past Angelena Mexicano for No. 1 on the Illinois all-time home run list after hitting the 52nd long ball of her career in the Illini’s 11-6 victory over Ohio State.

Evans’ standout senior season has garnered her attention from around the conference and country. She was awarded the 2017 Female Big Ten Medal of Honor and named the 2017 Arthur Ashe Jr. Female Sports Scholar of the Year. At the Oskees – Illini Athletics annual award ceremony – she was also named a Dike Eddleman Female Athlete of the Year finalist. This accolade is given out annually to the top female athlete at the University.

Even though Evans has accomplished a lot this year, with a 2-7 end to the regular season, Perry believes she and the team must refocus to play their best ball when it matters most.

“We had a good body of work,” Perry said. “We didn’t have a good finish. I like my team. I believe in my team. I believe we can get it back on track. I do think we have to have some serious conversations and take really serious looks at a few things.”