Smith’s first season now behind him 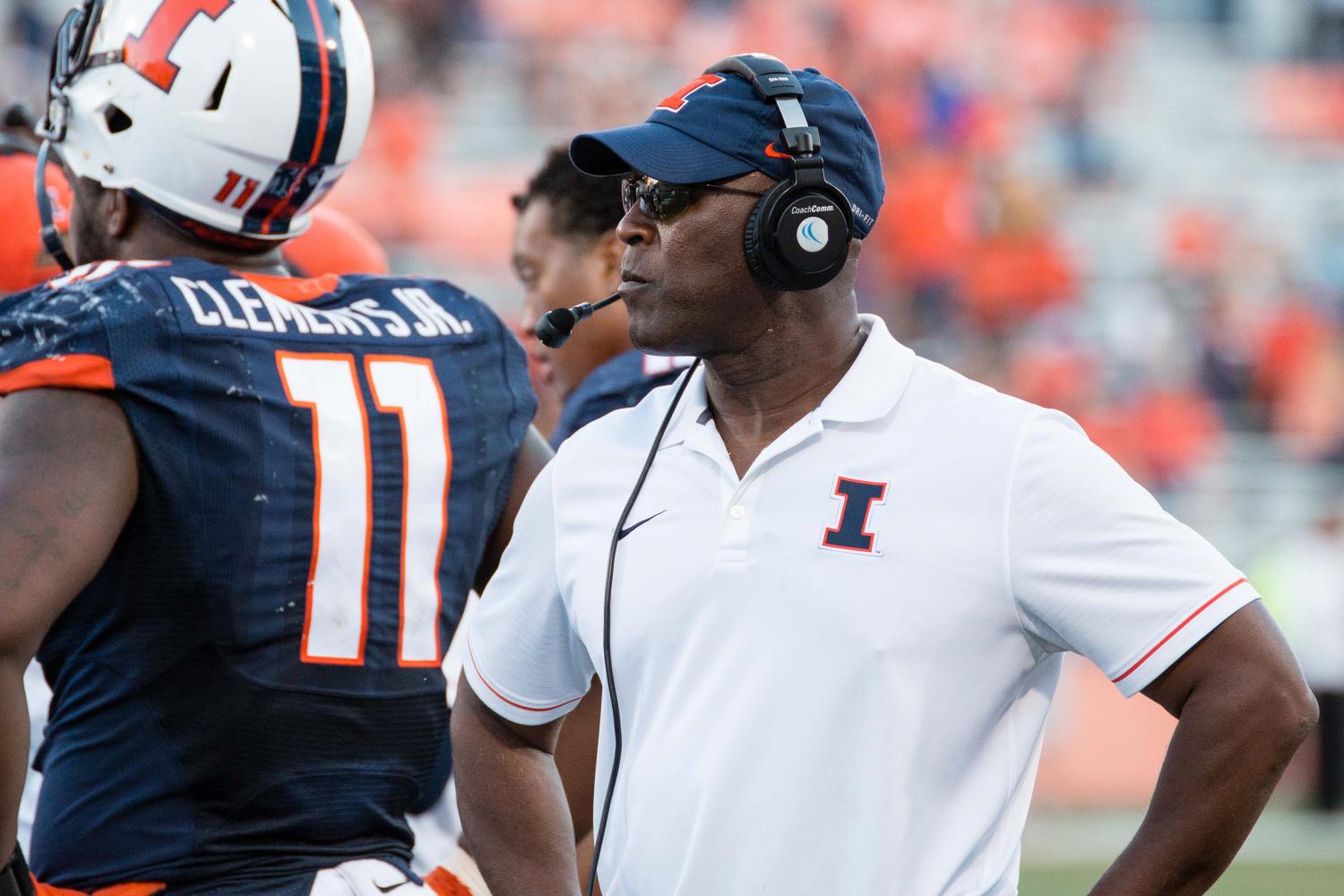 Illinois head coach Lovie Smith walks down the sideline during a timeout in the game against Western Michigan at Memorial Stadium on Sept. 17. Illinois would later end the season 3-9.

This Illinois football season will not stand out in the record books.

On paper, this season looks like a continuation of the program’s decline.

The Illini’s 3-9 record was the worst record since former head coach Tim Beckman’s first season, when the Illini went 2-10.

Illinois lost its nine games by an average of 24 points, and its two wins in the Big Ten came against the conference’s worst teams, Rutgers and Michigan State.

But despite the Illini finishing in the basement of the Big Ten, this season was not wasted. With all the hype surrounding the hire of head coach Lovie Smith, there was a renewed interest in the program.

Home attendance numbers were the highest they have been since 2011, and Memorial Stadium hit capacity in the second game of the season against North Carolina for the first time since that same season.

Fans poured into the stadium, but unfortunately, the Illini could not put the pieces together and put on the show they would have liked.

The Illini’s offense had a rough time moving the ball down the field. The Illini ranked second-to-last in the Big Ten in total offense. Running back Kendrick Foster carried the load on the offensive end.

Foster was ready to transfer from the University before Smith was hired. After he met his new coach, he decided to stay and worked his way to the top of the depth chart and became the Illini’s most potent threat on offense, leading the team in rushing yards (720), total yards (1,328), rushing touchdowns (seven) and total touchdowns (nine).

Freshman Reggie Corbin became the Illini’s second-leading rusher on the season, running for 523 yards. By the end of the season, Corbin was taking more snaps than predicted starter Ke’Shawn Vaughn.

Vaughn struggled most of his sophomore season, unable to build on the success that he had as a freshman. However, he showed flashes of the downhill speed throughout the season, which made him a credible threat for the Illini. He announced that he was transferring to Vanderbilt in January.

While the Illini had a strong running game all season, the passing game could not keep up due to injuries keeping one quarterback from being under center for too long at a time.

Senior quarterback Wes Lunt was poised to carry the Illini through the season, but a shoulder injury in the loss against Purdue sidelined him for over half the season. Backup Chayce Crouch filled in nicely for a short time, but he also fell victim to an injury that led to him getting season-ending surgery.

That left the responsibility of running the offense to Jeff George Jr., a sophomore with no on-field experience at the college level. While George did pick up his first collegiate win against Michigan State, the Illini could not build much momentum throughout the season with their offense.

Despite the struggles on the offensive side of the ball, the Illini defense did their best to keep their team in games all season.

The Illini defensive line rarely had trouble pressuring the ball, especially with defensive ends Dawuane Smoot and Carroll Phillips stacking the defensive line every snap, and linebacker Hardy Nickerson cleaning up anybody who leaked through the first line.

Lunt will also get a shot in the NFL with the Minnesota Vikings. Other Illini who were given a chance in the NFL are offensive lineman Joe Spencer, Michael Martin, wide receiver Justin Hardee and defensive end Gimel President.

With his first graduating class gone and his first recruiting class in, Smith will look to better meet the lofty expectations that he brought with him next season.