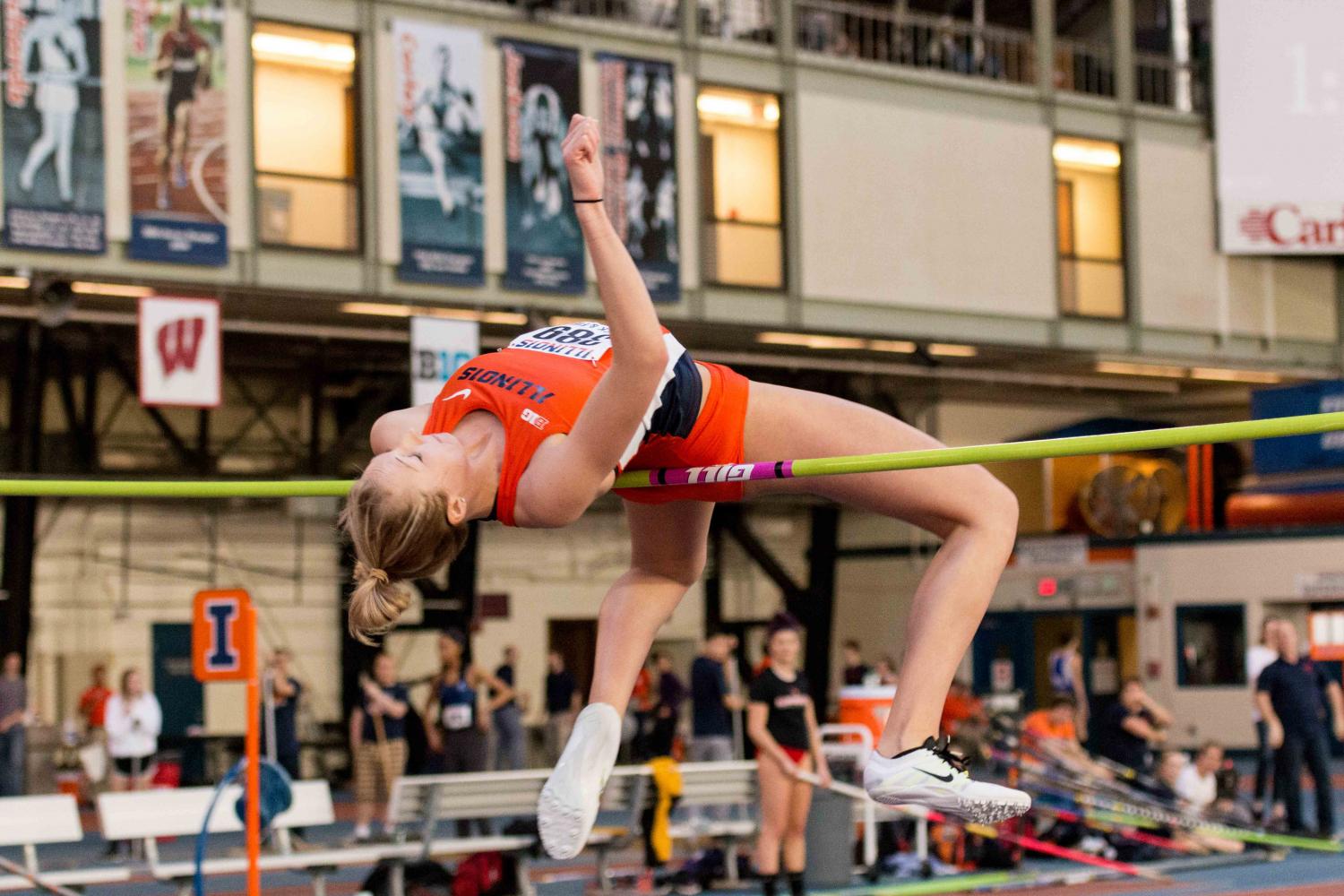 Illinois’ Kandie Bloch-Jones attemps the high jump during the Orange and Blue meet on Saturday, February 20, 2016. Kandie won the high jump with a height of 1.81 meters.

The Illinois women’s track and field team will compete at the Big Ten championships this weekend, but the season will continue with the NCAA Regionals for some of the team’s top athletes.

Sophomore Jayla Stewart, redshirt junior Pedrya Seymour and senior Kandie Bloch-Jones are a few of the athletes ranked in the top-48 in their respective events, which is the standard to qualify for the NCAA Regionals.

Head coach Ron Garner said Illinois has hopes of finishing in the upper-half at the Big Ten championships and picking up some podium performances.

“We’re improving; the team is committed to what needs to be done,” Garner said. “We have some maturity too. They’ve been to a few Big Tens.”

This season, the Illini climbed to the second and third spot in the Big Ten 100-meter hurdle rankings and clocked the fifth-fastest hurdle shuttle relay in school history.

“Those were just outstanding performances,” Garner said.“They’ve been commended two years back-to-back. Last year, we were third in the country in the relay at the end of the year. We should be in that same area again. That’s a good indicator that the program is moving in the right direction.”

The shuttle relay ran a time of 54.54 seconds to finish second at the Drake Relays this season.

Following her sixth-place finish at the Rio Olympics last summer, Seymour is holding onto a personal record of 13.06 seconds for this outdoor season. Stewart trails Seymour with a time of 13.14 seconds that earned her a first-place finish in the 100 hurdles at Drake.

Bloch-Jones also has plans to make her mark as the postseason quickly approaches. She is ranked among the top-48 for high jump in Illinois’ NCAA Regional with a season best of 1.778 meters.

After only jumping three outdoor meets, she is looking toward competing on bigger stages in the weeks to come.

“I’m just trying to stay positive,” Bloch-Jones said. “Everybody has to have some bad meets, and I’m just looking at it that way for Big Tens. It will be a big meet.”

In long jump, sophomore Briana Driver is ranked No. 12 in the Big Ten with a 6.05 meter jump she earned at the Illinois Twilight meet. Ranked at No. 23 is junior Janile Rogers with a mark of 5.84 meters.

Senior triple-jumper Kortni Smyers-Jones sits at No. 12 in the Big Ten and falls just outside of NCAA Regional qualifying with a season-best of 12.25 meters.

This season, junior Nicole Choquette ran a personal best of 2:06.56 in the 800-meter run, placing her fifth in the Big Ten and 27th in the NCAA.

The 4×100 meter relay team has also achieved qualifying times this season. At the Houston Alumni Invitational, the team of Driver, Rogers, Stewart and Seymour ran for a time of 45.01 seconds, seeding them within the top-25 in the NCAA and seventh in the Big Ten.

The last portion of the season has been full of opportunities to fine-tune technicalities and train for faster times. Garner said despite mistakes this season, the team is poised to take on the Big Tens and NCAA Regionals.

“We had some mistakes here and there, but we’re ready to improve with time,” Garner said. “That was a trial run, to be that way at the Big Ten championships will come down to who wants it the most.”