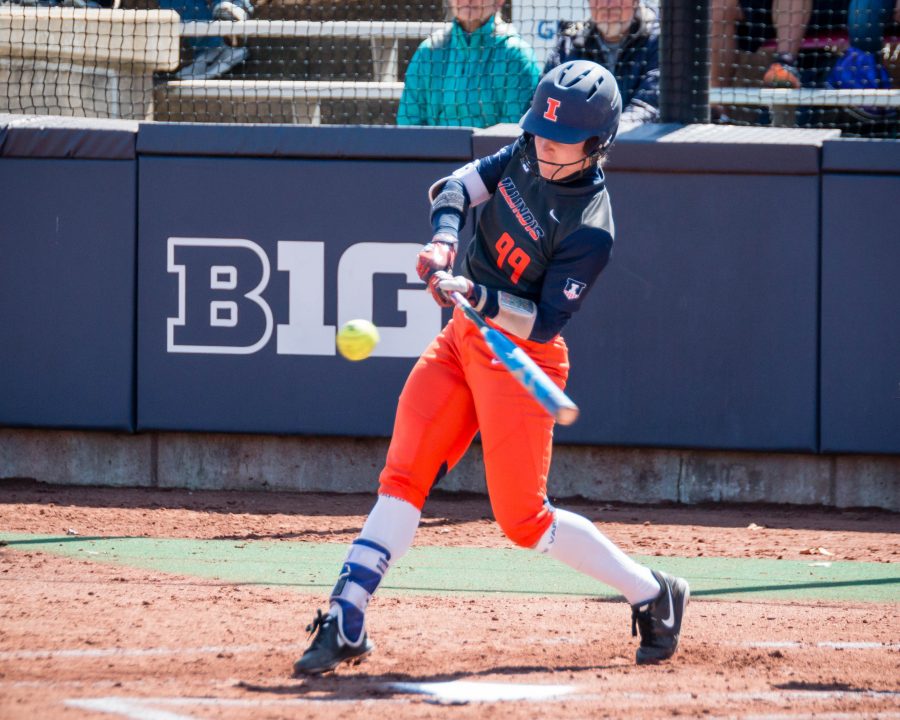 Illinois’ Annie Fleming takes a swing against Minnesota on Saturday. The Illini left the series with one win.

After being bounced out of the NCAA Tournament, seniors Nicole Evans, Breanna Wonderly, Alyssa Gunther and Ruby Rivera will no longer suit up for the Illinois softball team.

“They have definitely set the tone and set the pace for the future,” head coach Tyra Perry said. “It was an awesome privilege to go to war with them today and every day throughout this season. My only regret is that I only had two years with those guys.”

In similar fashion to last year, Illinois’ hopes of advancing past the NCAA Regional Final was ended by tournament host Kentucky. The Wildcats defeated the Illini 4-2 at John Cropp Stadium and dropped Wonderly’s season record to 21-16.

Despite not moving on to the next round, Evans made it clear that her team wouldn’t have been there without Perry.

“I can’t say enough about it. She cares about us as people (and) as players. This is how much I care about it,” Evans said, pointing to her face and fighting back tears.” She does so much for our program and we’re so lucky to have her.”

In her two seasons at Illinois, Perry has helped the softball team reach places that it had not been in quite some time. During the seniors’ freshman and sophomore campaigns, the Illini totaled 50 wins and 53 losses.

But since being hired in June of 2015, Perry’s impact on the program has been felt immediately. Illinois has won 75 games over two years and made back-to-back appearances in the NCAA Regional Final, after last making the NCAA tournament in 2010.

On Sunday, the Illini had a chance to continue their program turnaround against the 14th-seeded Wildcats.

Kentucky didn’t waste any time getting on the board. In the first inning, the home team recorded three hits and three runs, highlighted by freshman Alex Martens’ two-run long ball to centerfield. Martens brought in another run in the top of the third inning on a sacrifice fly, plating sophomore Abbey Cheek.

Trailing 4-1 heading into the seventh inning, the Illini had to find a way to jumpstart their offense and keep their season alive.  Junior Maddie Doane, the first batter of the frame, appeared to give her team the spark it needed by making it all the way to third base on a fielding error.

Sophomore Kiana Sherlund followed suit by singling up the middle and recording her team-high 17th stolen base of the season to advance to second. Doane eventually made it home on a ground out by Gunther that cut the lead to two, but that would be Illinois’ last run of the game.

Evans and sophomore Stephanie Abello grounded out to cap off a year in which the Illini won 39 games – the fourth-most victories in a single season in program history.

Despite the achievement, Evans believes her coach and teammates have a lot to look forward to next season and in the years to come. She ends her career as Illinois’ all-time homerun and RBI leader with 53 and 176, respectively.

“(The seniors) talked all the time about leaving our mark on the program,” Evans said. “We hadn’t been here in a while and it means a lot just for our school (and) for our program. This is just the start. They’ll be back here every single year, plus more. To start it off is great, but they’re definitely going a lot farther in the future.”

Flemming tied for a team-high two hits in her three at-bats. She was one of eight runners left on base – three more than Kentucky – but didn’t make that her main focus following the loss. Instead, with one of them sitting beside her, Flemming took the time to praise Evans and the other seniors.

She spent three years alongside them and experienced every success and failure firsthand. With one more year before she has to hang it up, Flemming believes the most challenging part of the softball team’s rebirth is out of the way.